Christopher Ashton Kutcher is a well-known figure in the American entertainment industry. Apart from acting, Kutcher is also an investor. A venture capitalist, Kutcher has successfully invested in several high technology startups with some of his investments including Skype, Foursquare, Airbnb, Path and Fab.com.

But despite being a businessman and a public figure, societal problems are dear to his heart.  In 2008, Kutcher and his ex-wife, Demi Moore decided to tackle one of the more serious crimes facing our modern world – human/sex trafficking.

By basic definition, human trafficking is the trade of humans, most commonly for the purpose of sexual slavery, forced labor or commercial sexual exploitation. The trade is a modern form of slavery. It involves controlling a person through force, fraud, or coercion to exploit the victim. Over the years, the United Nations, International Non-Governmental Organizations, human rights activists, and individuals have all stepped up efforts in order to end the trade. However, due to the high rate of unemployment and rising poverty levels in some nations, the trade is still secretly thriving.

Also, with the rise of the Internet and technology, it is becoming increasingly easy for traffickers to lure people, especially young girls, into the dirty business. Mostly, traffickers will hide on the deep web, using sophisticated gadgets to carry out their trade.

Kutcher and Moore decided to concentrate their efforts on the Internet, to thwart the trade of the traffickers. They set up an organization called Thorn. Thorn’s mission is very simple: to eliminate sex-trafficking and child exploitation over the Internet.

They dedicate their time and resources to searching the darker corners of the Internet, hunting out traffickers who have been involving in trafficking innocent people.  Since establishing Thorn in 2008, the organization has so far, identified and rescued over 6,000 trafficking victims and captured over 2,000 traffickers – many of which are now in the process of facing criminal charges. 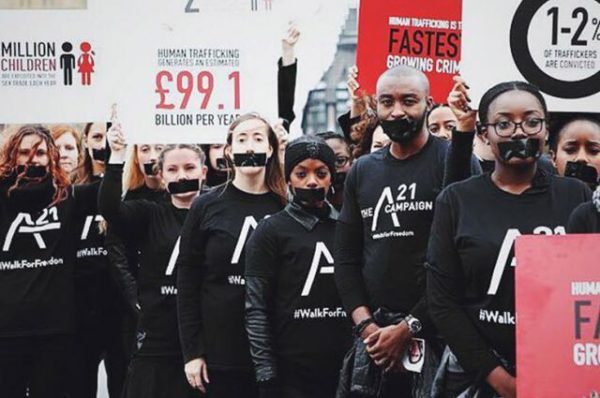 Chairman of the Thorn Technical Task Force, Jim Pitkow said as the world is improving with technology, so too will unscrupulous people improve on their advantage to carry out these activities, which impact negatively on our society.

“New innovations will always be adopted for both good and evil purposes. At Thorn, we tip the scales in favor of good by stopping exploitation and protecting our children,” Pitkow said.

Kutcher himself sat down to discuss his organization, and how it makes a big difference in society. Below is the video.

Children are particularly vulnerable to this modern-day slavery. Children who are unfortunate enough to have a difficult background, such as parental neglect, family poverty or broken homes are lured into exploitation by the unscrupulous criminals. According to activists, children of all races are lured into prostitution through trafficking, with the average age of these children being as low as 13.

In the United States, for example, every year, it is said that approximately 100,000 children become victims of trafficking. This tells us the seriousness of the problem. If this number can be recorded, even in the United States, which is considered a developed country, what will it be for the poorer countries? Kutcher deserves our support.

By: Amando Flavio via anonhq.com

What do you think of when you hear the name Colonel Gaddafi? Tyrant? Dictator? Terrorist? Well, a national citizen of Libya may disagree but we want you to decide. Ruling the country for for 41 years until his demise in October 2011, Muammar Gaddafi did some truly amazing things for his country and repeatedly tried…

A “trans-species” woman who identifies as an elf appeared on Good Morning Britain today. The young woman from Chicago, named Kimberel Eventide told Piers Morgan and Susanna Reid that she is an elf trapped in a human body and that she identifies as an “Otherkin,” which is a term used to describe individuals who feel…