By: Vandita via anonhq.com

It’s been five years since an earthquake with a magnitude of 9.0 – the biggest in the nation’s recorded history and one of the five most powerful recorded ever around the world – and subsequent tsunami destroyed large parts of the Fukushima Daiichi Nuclear Power Plant, eventually killing more than 20,000 men, women and children; displaced over 200,000; and brought untold horror and misery to many survivors.

The Fukushima nuclear disaster on March 11, 2011, resulted in massive radioactive contamination of the Japanese mainland, as well as brought to the forefront the dangers of worldwide nuclear radiation. Five years later, after-effects of the catastrophic event continue to plague the world, making it the greatest environmental disaster of all time.

“This is an apocalyptic event. This is something that could contaminate the entire Pacific Ocean. It is extremely serious. The reality is that Tokyo Electric does not know what is happening and does not know how to control what is going on. Our entire planet is at risk here.” 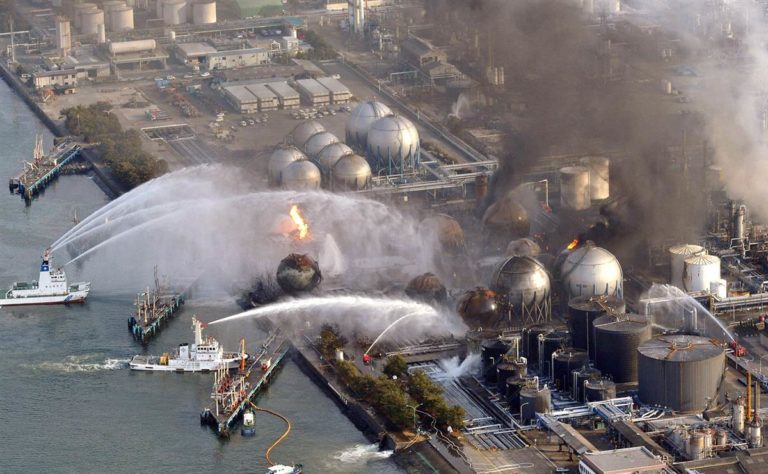 #2 The Fukushima Daiichi Nuclear Plant holds 11,400 fuel rods – Fukushima reactor No. 4 alone has 1300 fuel rods stored in a leaking pool. These fuel rods need to be manually removed, along with 6,300 fuel rods stored nearby. Since the fuel rods, which contain radiation equivalent to 14,000 times the amount released when the US dropped an atomic bomb on Hiroshima at the end of World War II, have to be extracted manually to avoid a worse disaster than the March 2011 nuclear crisis, even the tiniest mistake could lead to a nuclear chain reaction.

#4 In the immediate aftermath of the disaster, the plant was spewing an estimated 5,000 to 15,000 terabecquerels (trillion Becquerels) of cesium-137 a month. According to Jota Kanda, an oceanographer at Tokyo University of Marine Science and Technology, the plant continues to leak 10 billion Becquerels of cesium-137 per day into the Pacific Ocean.

#5 Within two years of the catastrophe, TEPCO admitted that they had detected the highly toxic strontium-90, a byproduct of nuclear fission that can cause bone cancer if ingested, at levels 30 times the permitted rate. It also publicly admitted that a cumulative 20 trillion to 40 trillion Becquerels of radioactive tritium had leaked into the sea since the disaster.

#6 Apart from Cesium-137 and Strontium-90, the plant continues to leak large amounts of Iodine-131 into the air. Because the thyroid quickly absorbs Iodine-131 in a radioactive event, the resultant internal contamination damages the thyroid, leading to hypothyroidism, cancer and death. Harvey Wasserman writes:

“Iodine-131 can be ingested into the thyroid, where it emits beta particles (electrons) that damage tissue. A plague of damaged thyroids has already been reported among as many as 40% of the children in the Fukushima area. That percentage can only go higher. In developing youngsters, it can stunt both physical and mental growth. Among adults it causes a very wide range of ancillary ailments, including cancer.”

#7 Experts call it the biggest release of radiation to a body of water in the history of the world, much worse than Chernobyl. They project that the entire Pacific Ocean will have Cesium levels 5 to 10 times higher than what they were at the peak of atomic bomb testing decades ago.

#9 According to Japan’s Ministry of Economy, Trade and Industry (METI), more than 1,100 square kilometers of villages, mountains and forests remain uninhabitable; fully cleaning the site will require half a century.

#10 We have endless releases into the Pacific Ocean that will be ongoing for not only our lifetimes, but our children’s lifetimes, concludes researcher Christina Consolo. She tells RT:

“…The worst case scenario could play out in death to billions of people. A true apocalypse… A weather event, power outage, earthquake, tsunami, cooling system failure, or explosion and fire in any way, shape, or form, at any location on the Fukushima site, could cascade into an event of that magnitude as well.”

Recently, strange footage that looks distinctly different from CGI was captured on the same day that mainstream media reported pilots saw what appears to be the same thing in the sky, in the Republic of Ireland. The dash camera footage was published by Sandy Laverty of Coleraine, and it went viral on forums before being…