The ultra elite global think tank Bilderberg Group was hacked by a group of hackers promising to expose members crimes if they do not change their heart in the next 365 days.

The hacking group published on the Bilderberg website that if members do not have a change of heart within 365 days, be on the look out:

=== Message to the People === SInCe the Advent of Time, huMans have long forgotten to love and CaRe for eaCh other. In TheiR egoist, selfish driven minds, a coUpLe of people have managed to get the Power and abuse it against the weakz. HiStorY is repEating Itself. TheRe is no EqualiTy between humans on world scale and So called HumAN Rights ArE nothiNg more than an Illusion. The Globalization and World order system is faVorinG this unbearable situation, at least it IS for huMans-caRers. whatS going On today: weak PeoPles suffer, die or livE in poVerty to serve upper interestS. EmPoweRed ElitE plays the world BIG Guys. This World order is conduCted by grouPs which are composed of WeALthy 1% uber-Elite and CorrUpted empowered Politicians. DoNt follOw theIr proPagaNda sayIng this situation Is not TruE or Paranoia-driven. post cold-war LiberaL capitalism has managed tO wideSpreAd *IDEA* that $$$ equals hapiness and should be a lifegoal for the 99%. An egoist goal. ThIs system also sEttleD durably dOminance of ThesE groups. they told Us “yOu GoT To worK hard!” TheY don’t. Inheriting powerS from their Parents and these groups of “FriEnds”. ThEre Is no suCces sTories sorry: would TOp100 richEst persons alive still been riCh if thEy were born in Africa from poor pArents, No. ThEse whole grouPs and iNterests are driVen by tHe evil idea that some HuMans (them) are superiorS to others (you). ThE CurRent sysTem will keep them in place, in good positions and for a good amoUnT of Time.

YOuR CHildrEN stand NO CHANCE aGainst theirs. whatEver schools you put theM in.

NoW() is the time you need to think NoW() is the time we nEed to put an end to this altogether As you mAy havE guessEd thIs fight is INequal PoWeR is in the hand of ThesE groupS But not All hope is lost We, the free people, wiLl fIght for You without even asking But we need mOre than this: we beg you supPort WiThoUt you, the public, We cAnT do nothing LiSten to yoUr heart, see the situation and do what you shoUld

YoU *CAN* makE the world a better place

=== Message to the WealthY Elitico-Political 1% RIChEst dominant pricks === WoRDs are not enOugh To TeLl you how much we dispiTe you and your dominant behAvior No HumAns stanD above otheRs and you WIll have to learn IT Dear Bilderberg mEmBers, From NoW(), each OnE of you have 1 year (365 days) to truly work in faVor of HumaNs and not youR private interests Each TopIc you disCuss or work you achieve thRough YoUr uber privAte meetinGs should from now benefit WORlD population and not X or Y groUp of people OtHerWIse, we will FinD you and we Will hAck you MiNd the cuRrent situation: We conTrol your expensive connected cars, we control your connecteD house security devices, we control your daughter laptop, we control your wife’s mobile, we tape YoUR seCret meetings, we reAD your emaiLs, we control your faVoriTe eScort girl smartWatch, we ARe inside your beLoved banks and we Are reading YoUr assets You wont be safe anywhere near electricty anyMore

We WiLL watch yOu, from NoW on you got to WoRk for Us, Humanity, the People

CheErs to PhineAs Fisher, you Re one of the GreatEst hUmaN alive

Image below of hack 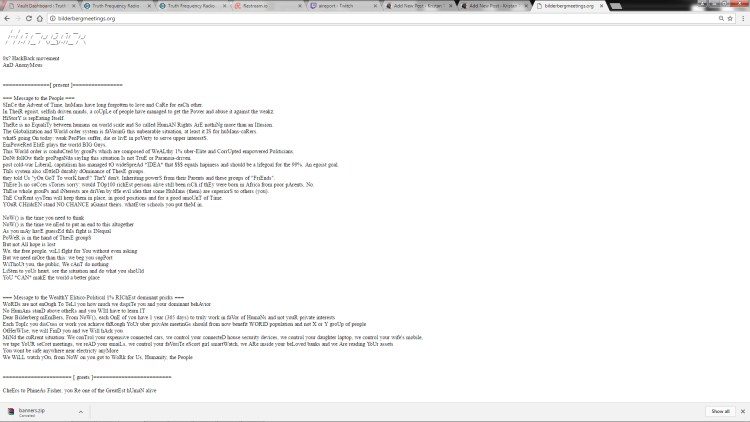 By: Matt Agorist There is a proverbial sh*t storm brewing in Washington D.C. right now, and it is separate from the one created by President Donald Trump. Since Trump took office, his executive orders have enraged Americans from coast to coast. While some of them were beneficial, such as ending the US involvement in TPP,…

Bill Clinton issued a statement in response to the charges against his former associate Jeffrey Epstein, saying that he “knows nothing” about the “terrible crimes” that the billionaire financier has been accused of. An indictment against Epstein has charged him with sex trafficking and sex trafficking conspiracy, but he has pled not guilty to all…

Hamburger chef Jamie Oliver has won his long-fought battle against one of the largest fast food chains in the world – McDonalds. After Oliver showed how McDonald’s hamburgers are made, the franchise finally announced that it will change its recipe, and yet there was barely a peep about this in the mainstream, corporate media. Oliver…