In 1898 a man named Morgan Robertson penned a book titled “Wreck of the Titan” about a luxury liner deemed unsinkable that was going too fast in the North Atlantic in April and hit an iceberg killing most everyone on board due to lack of lifeboats.

14 years later this fictional book would play out in real life exactly down to the name, with the wreck of the Titanic; but this time it would have major political implications. Some of the wealthiest men in the world were on that ship and some were opposed to the Federal Reserve and central banks.

FACT: JP Morgan was booked on the voyage but canceled at the last second.

FACT: There were no red flares on board to signal to any boats for rescue. Only white flares that signal a party and that everything is okay.

FACT: It was the first ship of its kind with the ability to seal decks electromagnetically which could also seal people below deck.

FACT: The Captain Edward Smith was one of the most decorated Captains of his time and would have been totally out of character by avoiding precautions.

FACT: The author of the book was poisoned to death a couple years after the Titanic sank.

FACT: The Federal Reserve was formed the very next year.

FACT: The Astor Family was one of the richest families in the world and John Astor III opposed the Federal Reserve. 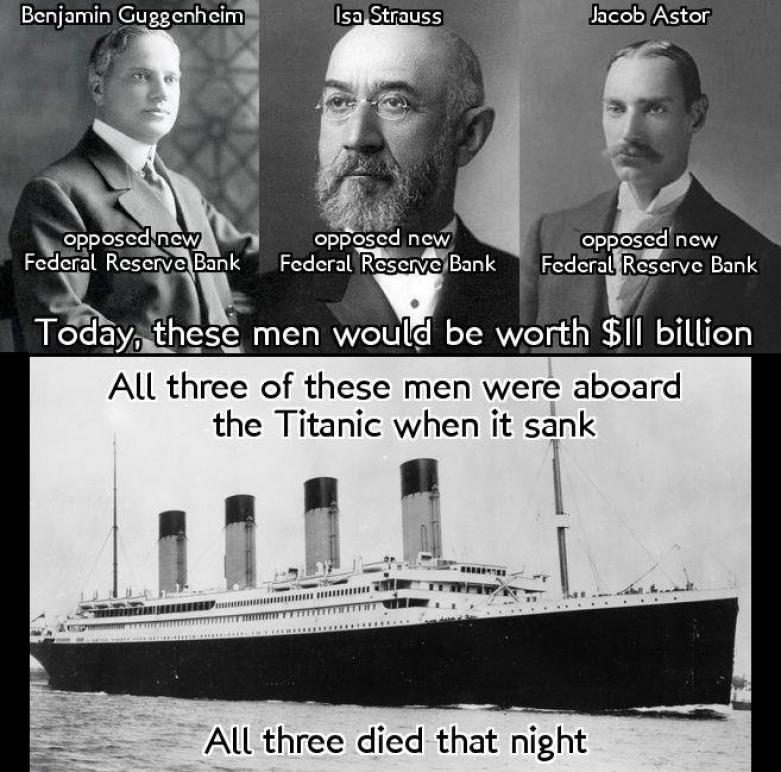 John Jacob Astor IV, the richest man in the world at the time, a friend of Nikola Tesla, and an outspoken opponent of the creation of the Federal Reserve. Astor gained his wealth, in part, as a real estate builder, investor, and inventor. Other prominent Federal Reserve detractors, such as Benjamin Guggenheim and Isa Strauss, also died on board.

Did JP Morgan get the idea of how to kill off the opposition to the Federal Reserve from a book written 14 years prior?

This was a book (below) titled “The Titan” published 14 years before the Titanic sank and look at the similarities. 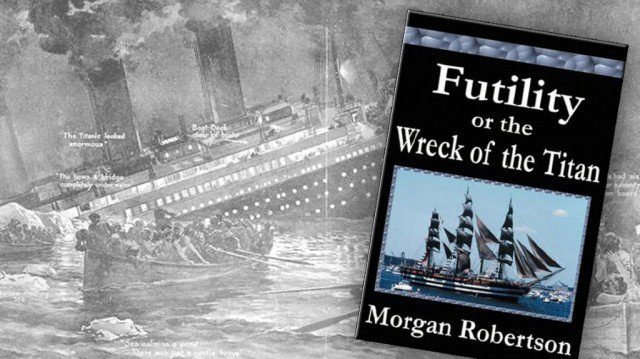 Did they hatch a plan at Jekyll Island to build a ship to eliminate the competition?

Similarities to the Titanic

Although the novel was written before the Olympic-class Titanic had even been designed, there are some remarkable similarities between the fictional and real-life counterparts. Like the Titanic, the fictional ship sank in April in the North Atlantic, and there were not enough lifeboats for the passengers. There are also similarities between the size (800 ft long for Titan versus 882 ft 9 in long for the Titanic), speed (25 knots for Titan, 21 knots for Titanic) and life-saving equipment.

Beyond the name, the similarities between the Titanic and the fictional Titan include:

The Titanic carried only 16 lifeboats, plus 4 Engelhardt folding lifeboats,less than half the number required for her passenger capacity of 3000. The Titan carried “as few as the law allowed”, 24 lifeboats, less than half needed for her 3000 capacity.

Moving too fast at 22½ knots,the Titanic struck an iceberg on the starboard side on the night of April 14, 1912 in the North Atlantic 400 miles away from Newfoundland. Also on an April night, in the North Atlantic 400 miles from Newfoundland (Terranova), the Titan hit an iceberg while traveling at 25 knots, also on the starboard side.

Google became the most popular search engine on the web because it connected people with the links that were close to their searches while offering up a wide variety of different sources, but now it is obviously far pastime to move onto more trusted platforms. In the early days of the internet, search engines and…

One of the most explosive revelations from the Wikileaks releases on Hillary Clinton was the details of her close connections with Google. In fact, this is more than just a connection, the emails detailed a proposal from former Google Chairman Eric Schmidt, in which he proposes a financial donation of $1.5 billion for the Clinton…