This article is from Greenmedinfo.com, Originally published on DrSircus.com.

Most people think they have to die to go to hell but that is not true anymore. Today, in the mainstream press, they announced the existence of a hell hole in Japan at the destroyed nuclear power station at Fukushima. We have a hot spot on our planet that has never been imagined before and in the face of it human technology is helpless.

At the levels of radiation now being found a Fukushima, a robot would be able to operate for less than two hours before it was destroyed. And Japan’s National Institute of Radiological Sciences said medical professionals had never even thought about encountering this level of radiation in their work.

The accident is enormous in its medical implications. Through future years, too long to contemplate, we will witness an epidemic of cancer as people inhale the radioactive elements, eat radioactive vegetables, rice and meat, and drink radioactive milk and teas. Year by year, decade through relentless decade, the radiation will build up yet modern medicine does not seem concerned.

New readings at Fukushima have recorded the highest radiation levels seen since the triple core meltdown that occurred in 2011. Readings inside the containment vessel of reactor no. 2 are as high as 530 Sieverts per hour, a dosage that would be fatal dozens and dozens of times over if a human were to be exposed to it. The previous high was a still very fatal rate of 73 Sieverts per hour.

The blazing radiation reading was taken near the entrance to the space just below the pressure vessel, which contains the reactor core. The highest radiation levels ever measured at Chernobyl were 300 Sieverts per hour; an incomprehensibly high dose which can kill a man almost instantly.

The new record at Fukushima of 530 Sieverts per hour is 70% higher than that of Chernobyl. The 530 Sievert reading was recorded some distance from the melted fuel, so in reality it could be 10 times higher than recorded, said Hideyuki Ban, co-director of Citizens’ Nuclear Information Center.

To put this in perspective, radiation is usually measured in thousandths of a Sievert, called millisieverts. For example, most people receive around 2.4 millisieverts per year from background radiation, or only 0.0002739726 per hour.

According to the Kyodo news agency, the institute estimates that exposure to one Sievert of radiation could lead to infertility, loss of hair and cataracts. One Sievert is enough to cause radiation sickness and nausea; 5 Sieverts would kill half those exposed to it within a month, and a single dose of 10 Sieverts would prove fatal within weeks.

How Come We Do Not Hear More about Fukushima?

It was just recently said that, “It is not every day that a U.S. president calls journalists among the most dishonest human beings on earth.” This dishonesty is displayed in its full power with nuclear power issues and specifically with Fukushima where things are so bad it is basically prohibited to talk about it openly in the press. In fact, as I was reading the essays on Yahoo about the record amount of radiation the essays disappeared off the news summary list.

Most of this radiation is being washed out to sea and it is quite quickly destroying the Pacific Ocean and much of the life in it. We have no idea how much of the radiation is escaping into the atmosphere but we do know that during the first few weeks of the nuclear accident, because of the explosions, huge amounts of radiation were released into the atmosphere and it circled around the globe especially in the northern hemisphere.

There is no way for anyone to say that having a point of output of radiation of 530 Sieverts an hour is safe or how many decades it will take a radioactive output of this magnitude to badly pollute our precious world. None of this is good news for our children. Anyone who says nuclear power is safe is lying. Anyone who says nuclear radiation is not dangerous is lying.

Researchers have discovered the existence of high-altitude “radiation clouds that can expose airplane passengers to high levels of radiation. These clouds were discovered as part of the NASA-funded Automated Radiation Measurements for Aerospace Safety (ARMAS) program.

It’s widely known that radiation levels are generally higher in the upper atmosphere versus on the ground, simply due to the higher levels of cosmic rays. However, when studying these levels of radiation, researchers detected small pockets where radiation levels suddenly spiked, up to double the normal level. These spikes could not be explained by normal sources of radiation like cosmic rays. Frequent flyers, and first trimester fetuses may be at greater risk due to their longer exposure times or greater vulnerability.

Because they are among the primary users of nuclear radiation, using it for all kinds of dangerous tests. A single CT scan of the chest is equal to about 350 standard chest X-rays. They are using radiation, a cause of cancer, to try to treat cancer and that usually does not turn out too well. Because they are not honest with themselves they cannot be honest with their patients, who should be told that many of the tests they are being given by doctors expose them to more dangerous radiation.

Like global warming, vaccines and now Islamic terrorism and immigration, there is no real discussion, no real science being sported in the news so the public is left completely in the dark about radiation exposures. The people with the real power in this world insist that we will always see and define the situation as safe, no need to worry or do anything like drink lots of iodine, sodium bicarbonate, magnesium and start off each day drinking a glass of ultra-pure edible clay. Edible clay is one of the most basic detoxification substances. It helps make sure absorbed radioactive particles pass through instead of into us. When was the last time you remember your doctor telling you to take magnesium or any of these other substances, or even sulfur to reduce the risk that our exposureto increasing levels of radiation do not lead to cancer.

“Deadly radiation levels of up to 9.4 Sieverts per hour have been recorded at the Fukushima Daiichi nuclear power plant – enough to kill a person in less than an hour if directly exposed, local media reports. The mortal radiation reading was taken in a small room, using a remote-controlled robot. The reading of 9.4 Sieverts (Sv) per hour was taken during the September 4-25 checks. Immediate radiation exposure around the Fukushima nuclear power following the deadly incident reached 400 millisieverts (mSv) per hour in places. One millisievert is a thousandth of a sievert, therefore the new 9.4 Sv reading is 23.5 times higher than the radiation level recorded in March, 2011.”

Officials revealed that about 2 Trillion becquerels of Fukushima radioactive material flowed into the ocean every month during 2013 — “Deadly strontium” releases are now more than double cesium — “Strontium gets into your bones… it changes the equation.” Strontium is a potentially lethal alkaline earth metal poses the biggest immediate concern, because, unlike cesium, it doesn’t get trapped in soil and tends to accumulate in bones of fish and animals if ingested.

Everyone wants to forget all about Fukushima

Everyone wants to forget all about Fukushima for who wants to remember their worst nightmares? The Fukushima nuclear plant meltdown disaster “is not over and will never end,” warns Dr. Helen Caldicott, Nobel Peace Prize nominee and holder of 21 honorary doctorate degrees.

It was reported by Andy Gunderson during the first year of the Fukushima meltdown that people on the west coast of the United States and Canada, Hawaii and Alaska were bearing some of the worst of the radiation and people then, and now, are not taking evasive action. Gunderson said in an exclusive interview with Chris Martenson that, “I am in touch with some scientists now who have been monitoring the air on the West Coast and in Seattle for instance, in April of 2011, the average person in Seattle breathed in 5-10 hot particles a day, depending on how active they are.” This means even if Fukushima disappeared today we should already be treating ourselves and our children for exposure.

Dr. Brownstein writes, “If there is enough inorganic, non-radioactive iodine in our bodies, the radioactive fallout has nowhere to bind in our bodies. It will pass through us, leaving our bodies unharmed. It is important to ensure that we have adequate iodine levels BEFORE this fallout hits.”

Everyone should be making sure that they are taking enough minerals because radioactive substances mimic their non-radioactive mineral substances. Strontium mimics calcium, for example, making it extremely dangerous to all life forms once it is absorbed. The toxic substances such as Tritium, Cesium, Plutonium and Strontium are being carried everywhere by winds, rain and ocean currents, entering the food chain through seaweed and seafood, building up high levels of toxicity in the fish – and humans – at the top end of the consumption chain.

Fukushima is Japan’s and the world’s radiation nightmare that will not go away in our lifetimes nor our children’s or grandchildren’s. The Fukushima nuclear power plant is hemorrhaging radioactive toxic waste into the ocean and though we are told not to panic, nor even to be casually concerned, the situation is dangerous and critical to future life on earth. 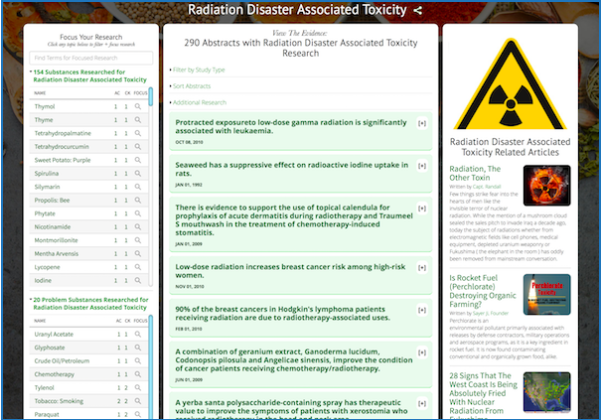 By: Matt Agorist The TSA — one of America’s most corrupt and incompetent agencies whose ostensible job is fighting terrorism — is apparently so unsatisfied with the mere ability to strip search babies, remove colostomy bags, beat up blind cancer patients, and fondle your genitalia, that they announced a more invasive physical pat-down earlier this month. The pat-downs, which…

From Nero to 9/11, via Pearl Harbour and the Gulf of Tonkin incident… Joe Crubaugh provides an “all time greatest hits” of false flag operations, whereby one scenario is repeated… as the world keeps falling for the same lie. The most commonly known false flag operations consist of a government agency staging a terror attack,…