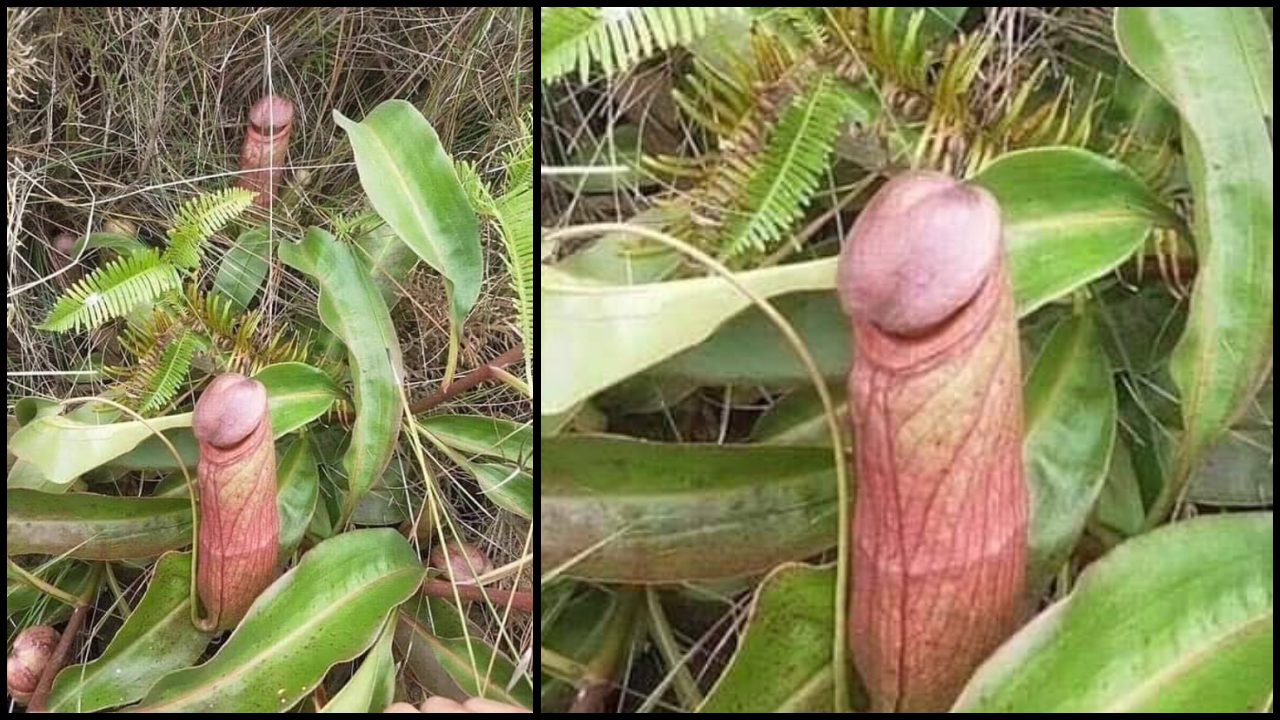 This week, pictures began to circulate on the internet of a strange plant that appears to have a phallic shape. A page called “Pictures in History” seems to be where the picture originated, and the caption described the plant as a “penis flytrap.” Curiosity and controversy followed, with many people unsure if the image was real. Facebook fact checkers were soon on the job to verify that this was, in fact, a real plant.

“In March 2019, images of a plant dubbed a “penis flytrap” — a play on words that evokes the comparatively less phallic Venus flytrap (Dionaea muscipula) — went viral. These posts all described the plant as belonging to the Nepenthes genus. Though the provenance of the image shown above is uncertain, we have no reason to doubt this is an authentic photograph of a plant that belongs to the Nepenthes genus.”

Snopes emailed Clinton Morse, the living plant collections manager at the University of Connecticut’s Department of Ecology and Evolutionary Biology for some more information about the photos.

“It is certainly a Nepenthes species and certainly looks like an authentic image. … All Nepenthes have a similar passive pitfall trap that develops with a closed trap, and as the trap matures the ‘lid’ opens up. The pitchers in the attached image are just starting to open thus giving them a rather penile appearance. I’ve never heard of them being called “penis fly trap,” but it is a rather accurate descriptive name,” Morse said.

It turns out that “penis flytrap” was a fitting nickname for this strange plant because just like the Venus flytrap, this plant also catches its prey with its strange appearance.

“Plants of this genus utilize a passive method of attraction and entrapment to capture and digest their insect quarry. The lip of the pitcher, a ridged double-edged collar called the peristome, is characterized by the presence of nectaries that attract insects to the pitcher opening. A lining of several layers of epicuticular wax on the upper region of the pitcher causes the insects to lose their footing while foraging and to slip down the steep walls of the pitcher into its base where they are trapped in a fluid,” a scientific review discovered by Snopes said.

The trap contains a fluid that the plant produces itself. The fluid often becomes watery or syrupy and is used to drown the insect prey.

“Research has shown this fluid contains viscoelastic biopolymers that may be crucial to the retention of insects within the traps of many species“, according to Wikipedia. The fluid in the traps is incredibly efficient, especially for trapping winged insects.

The plant is often described as a “carnivorous climbing vine” which can sometimes grow up to 4m high. The plant creates passive pitfall traps which are produced at the tips of the leaves. This species is most often seen in mossy forests between 800 and 2000 m above sea level. In Sumatra, it grows from the rocks along the coast up to a height of 1600 m, according to the University of Connecticut.

In addition to insects, Nepenthes may even occasionally catch small vertebrates, such as rats and lizards.

The lower part of the plant’s trap contains glands which absorb nutrients from captured insects. Along the upper inside part of the trap is a slick, waxy coating which makes it impossible for prey to escape. Surrounding the entrance to the trap is a structure called the peristome or “the lip” which has bright colors to attract prey, and a slippery surface that traps them. The colors are often seen as light-green, with light or dark-red or violet spots.

The genus name Nepenthes was first published in 1737 in Carl Linnaeus’s Hortus Cliffortianus. The name is a reference to a passage in Homer’s Odyssey, where a potion called “Nepenthes pharmakon” is given to Helen by an Egyptian queen.

After its discovery, Carl Linnaeus said of the plant, “If this is not Helen’s Nepenthes, it certainly will be for all botanists. What botanist would not be filled with admiration if, after a long journey, he should find this wonderful plant. In his astonishment past ills would be forgotten when beholding this admirable work of the Creator!”

By: Alanna Ketler via collective-evolution.com Once again, Pope Francis has made global headlines, shocking reporters late Sunday after blaming the “god of money” for the extremist violence that is taking place in Europe and the Middle East. A ruthless global economy, he argues, leads disenfranchised people to violence. Responding to a question from a journalist about…

Greetings citizens of the world. This is a message for the people all over the planet fighting for their freedom, and to those who have not yet joined in. The entire planet seems to be creeping towards revolution, especially in the past year. Occasionally, we will see footage on the news or on the internet…