The National Geospatial-Intelligence Agency’s capability is well-equipped to quell the violence of protesters, assist ICE in their deportation corralling, and track all those who belong to minority groups – Muslims, Black Lives Matter…

If you haven’t heard of the NGA, you can be forgiven. The NGA – the National Geospatial-Intelligence Agency employs over 15,000 people in its shadows. The NGA is the cutting-edge spy agency that oversees the surveillance trade.

Forget the CIA and NSA. This newish acronymic organization – taking its new existence (started as the National Photographic Interpretation Center in WWII) in 2003 – is massive. Billions are granted for budget and in 2011, its main building measured “four football fields long and covers as much ground as two aircraft carriers,” costing $1.4 billion to complete.

James Bamford reported for Foreign Policy this month how even President Obama, five months into his presidency, didn’t know of this agency.

“So, what do you [do]?” Obama asked a customer at the Five Guys hamburger restaurant in Washington in May 2009.

“I work at NGA, National Geospatial-Intelligence Agency,” he answered.

Obama, astonished, asked “So, explain to me exactly what this National Geospatial …” unable to recall the agency’s full name.

Bamford reports that “eight years after that videotape aired, the NGA remains by far the most shadowy member of the Big Five spy agencies, which include the CIA and the National Security Agency.”

But What Exactly is NGA?

“In 2016, the agency purchased 99 acres in St. Louis to construct additional buildings at a cost of $1.75 billion to accommodate the growing workforce, with 3,000 employees already in the city.

“The NGA is to pictures what the NSA is to voices. Its principal function is to analyze the billions of images and miles of video captured by drones in the Middle East and spy satellites circling the globe. But because it has largely kept its ultra-high-resolution cameras pointed away from the United States, according to a variety of studies, the agency has never been involved in domestic spy scandals like its two far more famous siblings, the CIA and the NSA. However, there’s reason to believe that this will change under President Donald Trump.”

Before the name switch to NGA, the agency was largely tasked with cartography. In 2003 it was reborn for the purpose of its current mission: satellite surveillance. They work closely with the U.S. Air Force, collecting and analyzing aerial surveillance through the use of drones and other unmanned systems. They play a crucial role in gathering US intelligence, including the intelligence gathering and replication of Bin-Laden’s compound for SEAL Team Six.

“How precise were its measurements and analysis? The NGA figured out how many people lived at the compound, their gender, and even their heights,” author David Brown said.

Located at the main headquarters in Ft. Belvoir, Virginia, the NGA has two additional facilities in Missouri and St. Louis at Scott Air Force Base. Ironically, Lt. Gen. James Clapper, better known for his position as the Under Secretary of Defense for Intelligence and Director of National Intelligence, arrived at NGA (then known as NIMA) only 2 days after 9/11 occurred. Clapper recalls his ‘transformative’ years with the agency:

“The events of 9/11 changed all that. It became clear to me and to the other senior leaders of NIMA that we did not have the luxury of implementing change over a prolonged period of time. We were at war and we needed to act immediately. So, we held a long weekend offsite at which we dramatically altered the organization and outlook of the Agency. In hindsight, this was exactly the right thing to do. Our nation, and our Agency, was fully engaged in a war and we had no choice but to focus on doing the best we could.”

Should We be Worried?

Currently, the NGA is one agency set to benefit under the requested $70.3 billion laid out for the 2017 US Intelligence Community Budget. The Trump administration is set to bolster the amount, taking the total amount for the Pentagon’s 2017 fiscal budget to a whopping $541 billion. (The NGA falls under the Pentagon category as a “highly-classified Pentagon intelligence agency.”)

This leads to the worrying observation that the NGA may soon be granted more authority. The aerial system used against Iraq and Afghanistan may soon be used against the American people, Bamford reports:

“With the capability to watch an area of 10 or even 15 square miles at a time, it would take just two drones hovering over Manhattan to continuously observe and follow all outdoor human activity, night and day. It can zoom in on an object as small as a stick of butter on a plate and store up to 1 million terabytes of data a day. That capacity would allow analysts to look back in time over days, weeks, or months. Technology is in the works to enable drones to remain aloft for years at a time.” 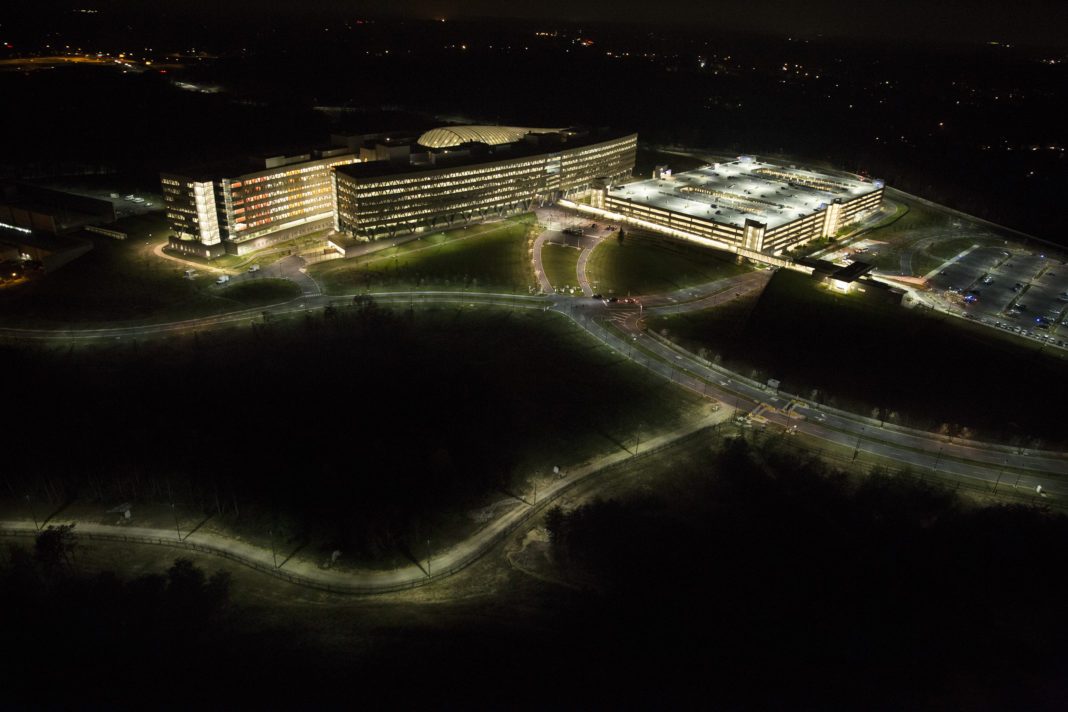 The National Geospatial-Intelligence Agency’s capability is well-equipped to quell the violence of protesters, assist ICE in their deportation corralling, and track all those who belong to minority groups – Muslims, Black Lives Matter… It isn’t farfetched, Bamford says. The CIA and NSA’s evil brother is more than capable of assisting the Trump administration in their quest, and the lack of domestic overhead spying legislation that currently stands allows for just that.