By: Kalee Brown via collective-evolution.com

You may have already seen the headlines: Italy’s Mount Etna recently spewed an impressive amount of lava during what is now its second eruption within the last year. Mount Etna represents Europe’s biggest and most powerful volcano, and its eruption poses a hazard to air traffic and potentially the surrounding villages and homes on the lower slopes of the volcano.

Volcano eruptions aren’t as rare as many people assume them to be. Although Mount Etna is the latest volcano to make big headlines, there are numerous other eruptions occurring all over the world. Volcanoes are erupting practically everywhere: India’s only volcano is active again after 150 years, and four of Iceland’s main volcanos are expected to erupt soon, to name a few. This begs the question: Is something happening to the Earth’s core?

Which Volcanoes Are Erupting or Are Dangerously Close?

According to Volcano Discovery, 35 volcanoes are either currently erupting right now or just recently erupted all over the world. There are even more volcanoes with eruption warnings and tons of other volcanoes that are active, meaning they could technically erupt at any minute (though unlikely).

According to USGS: “Scientists use the term magma for molten rock underground and lava for molten rock (and contained gases) that breaks through the Earth’s surface.” At the moment, something in the Earth is causing magma to be pushed up in numerous volcanoes worldwide.

One of the latest eruptions was Mount Etna. On February 27, 2017, the active volcano, located on the Eastern coast of Sicily, Italy, erupted. The volcano stands tall at 3,329 metres, representing the largest active volcano in all of Europe. The city declared a a yellow alert and, as recommended by the municipal emergency plan, issued an ordinance restricting anyone from visiting the volcano. Although there were no casualties, the eruption is still cause for concern, sparking fear around the city.

Barren Islands volcano, India’s only active volcano, just recently became active again after being dormant for the past 150 years. It erupted for four hours in January 2017. This volcano is particularly old, as its first eruption dates back to 1787. But what woke it up?

According to geophysicist Páll Einarsson, four of Iceland’s main volcanoes are showing more and more activity, indicating that they will erupt very soon. One of these volcanoes, Katla, is the most active its been in the past four decades.

Earlier this month, Indonesia’s Mount Sinabung in north Sumatra province erupted seven times over the course of a single day. Tourists and locals in the area are wearing eye, mouth, and face masks in order to prevent direct exposure to the volcanic ash, and thousands of villagers were displaced. At the time of the eruption, Mount Sinabung represented the tenth volcanic eruption over the course of a week.

On February 25, 2017, Guatemala’s Volcano of Fire erupted as well. This was actually the second time it had erupted already this year. The Kilauea volcano in Hawaii produced what locals are calling a “firehose” of lava on New Year’s Eve, which is still ongoing. There are numerous more examples of volcanoes erupting all over the world, some of them entirely unexpected.

To be clear, these volcanic eruptions have nothing to do with geographic location, as I’m sure you can tell, since Iceland and Indonesia are extremely far apart. It’s clear that something is causing an increase in worldwide seismic activity.

Just How Big Is This Increase in Activity?

Let’s take a look at the volcanic activity this century versus the previous one. 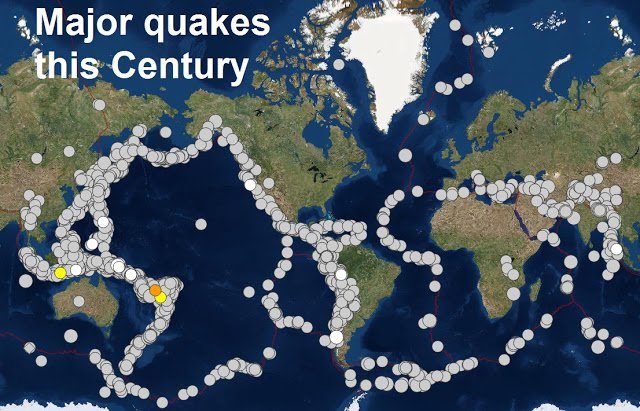 Even though it’s unclear why so many volcanoes are all of a sudden erupting, I think it’s crucial to understand the extent of the problem and to reflect on the changes we’ve made over the past few centuries.

There are numerous “super volcanoes” that could negatively affect and potentially kill millions of people, one of which is the “Campi Flegrei” volcano located in Italy. Many people forget how detrimental volcano eruptions can be; after all, the entire city of Pompeii was destroyed by one.

So, what changes have we made since all of these volcanoes started to erupt? It’s no secret that society as a whole treats the environment terribly; we dig it up, exploit its resources, and claim ownership of it only to destroy it. To me, from an energetic standpoint, these eruptions could be a reflection of the way we treat the environment. If you were being treated poorly and constantly exploited, would you implode, too?

As the Jeffrey Epstein case continues to unfold, a laundry list of celebrities, business magnates and socialites who have flown anywhere near the registered sex offender’s orbit are now tainted with pedo-polonium. Many of them, such as Bill Clinton, Ehud Barak, and Victoria’s Secret boss Les Wexner have sought to distance themselves from Epstein and…