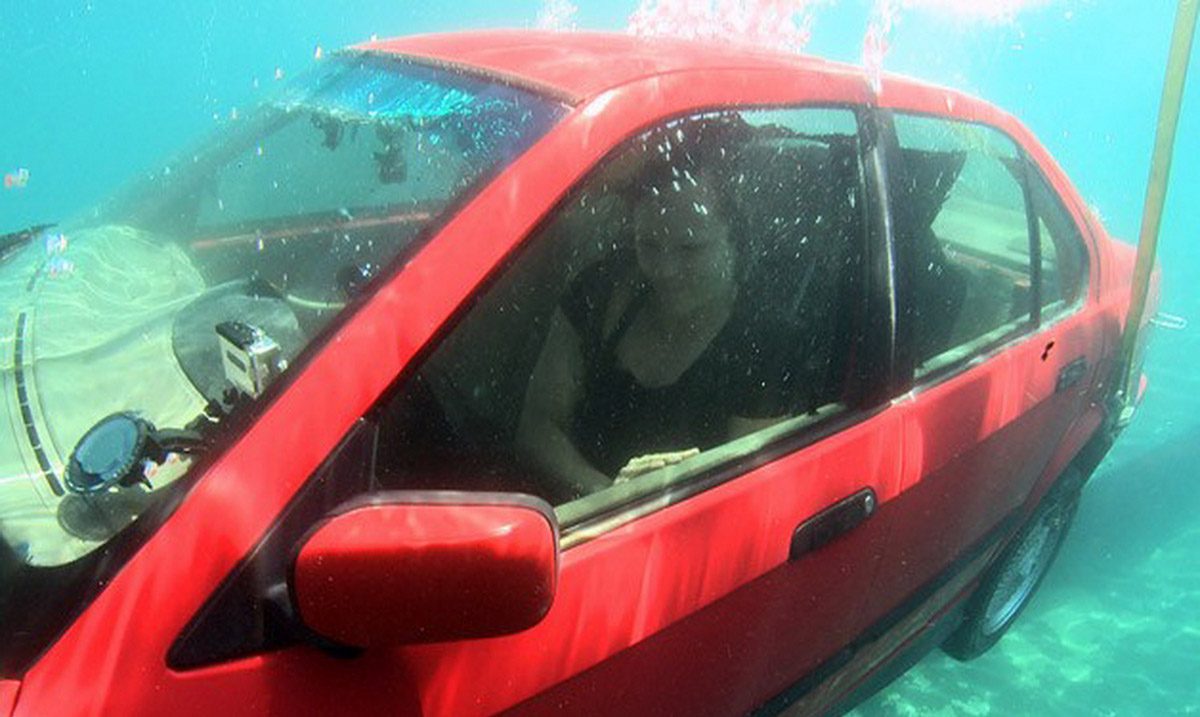 Being stuck in a sinking car may be rare, but it is still one of the most dangerous situations that a person can be in. There are also a ton of misconceptions about how to handle this situation, thanks to television and movies giving people the wrong ideas. Experts suggest that if you are in a car sinking in water, you will only have a minute to get out before the vehicle is complete submerged. You need to work on getting out of the vehicle as soon as you realize that you will be going into the water.

The first thing to do is take off your seatbelt, then immediately roll down the window and jump out. This goes against the first instinct that many people have to prevent the water from entering the car, but the water is going to get inside anyway, and as soon as the car is submerged, there will be so much pressure on the door that you will not be able to get out. If you are not able to escape in time, you will need to wait until the entire car is filled up with water to be able to open the door, so it is best to avoid this scenario altogether and get out as fast as possible.

“That’s easy to say, but the problem is your vehicle is only going to float for 30 seconds to a few minutes, if you’re lucky,” diving safety expert Gerry Dworkin says.

Another myth that persists in pop culture about sinking cars or boats is that air bubbles form where you able to hang out for a while and wait for help to arrive. Experts warn that this is a dangerous deception and that it is extremely risky to wait in your car for help, call for help once you get out of the car, because you will only have a few moments of air.

The weight of the engine in the car also tends to cause the car to flip once it becomes fully submerged, which can sometimes be disorienting for a person who just escaped. It is important to look for the area around you that has the most light and swim in that direction since you might have a difficult time telling up from down once the car flips.

In the clip below, a team of experts give a demonstration on the best way to escape a car if you are ever in this unfortunate situation. In the demonstration, the experts are able to escape the car in just a few seconds, but it was still not as easy as they expected.

Car crashes where water submersion was the main factor make up less than 1% of traffic fatalities nationwide, according to National Highway Traffic Safety Administration figures. Five states have the most submerged vehicles: Florida, California, Texas, Louisiana, and North Carolina. Many people in those states feel it’s common enough to drive with a window punch and seat belt cutters.

National Highway Traffic Safety Administration’s (NHTSA) Fatality Analysis Reporting System says from 2004 to 2007 there was an annual average of 384 traffic fatalities in which accidental drowning was listed as one of the causes of death. During that period total number fatalities from car crashes averaged 42,500 (the number was 35,092 in 2015). Drowning was a contributing factor but not necessarily the primary cause of death in 0.9% of fatal crashes and only 0.0069% of all car crashes, according to Safe Ride 4 Kids.

This means it’s not necessarily that the occupant couldn’t free himself from the seat belt or car and therefore drowned. The occupant could have sustained a fatal injury or lost consciousness prior to entering the water.

If a passenger is unable to roll down the windows before the car is entirely submerged, experts agree the next option should be to break one of the side windows, according to the Chicago Tribune.

The following tutorial at Wikihow gives step by step instructions on different techniques that could help you in this situation.

By Amanda Froelich at trueactivist.com “It was not depression that killed Robin Williams.” In 2014, the world lost an incredible man, actor, and comedian named Robin Williams. Having chosen to take his life via suicide, people reeled upon receiving the news, upset by the mere thought that someone so funny could opt to kill themselves. Three…