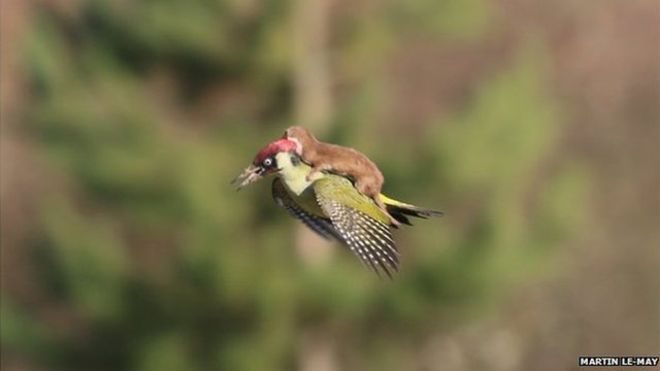 An incredible image recently captured by an amateur photographer from the UK named Martin Le-May, shows a weasel hitching a ride on the back of a woodpecker.

Le-May told BBC News that he took the amazing shot while he was out walking in the Hornchurch Country Park in East London.

It turns out that this was not a cute and friendly picture as many of us would like to assume, or as it may appear at first glance. Experts believe that the most likely scenario to explain this photo is that the weasel was attempting to kill the woodpecker. Le-May seems to agree, from what he witnessed.

Le-May says that he was drawn to the area because he heard loud squawking. It sounded like a bird was in distressed. That is when he saw the once in a lifetime event.

Le-May says he might have saved the woodpecker’s life by distracting the weasel.

“I think we may have distracted the weasel, as when the woodpecker landed it managed to escape and the weasel ran into the grass,” Le-May told the BBC. 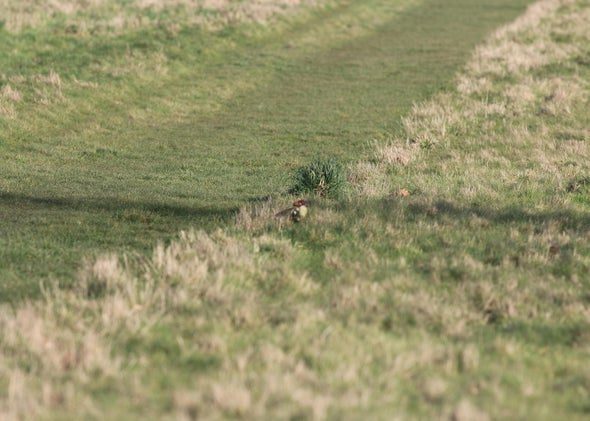 The photographer said that the bird and the weasel got roughly 10 feet into the air before landing again, at which point the bird managed to free itself and fly away. He estimates that both of the animals were unharmed in the incident.

“The woodpecker left with its life, the weasel just disappeared into the long grass, hungry,” he said.

As soon as the photo went viral, everyone was skeptical about whether or not the image was real.

Hany Farid, a professor of computer science at Dartmouth College, in New Hampshire, who researches digital forensics and image analysis, questioned the photo in an interview with National Geographic.

Farid says that the picture would be extremely difficult to forge, but the low resolution raises some questions.

“This would have required a nearly perfect and coincidental alignment of the two animals in their original photos so that they could be composited together. This type of forgery is therefore more difficult to create than, for example, two animals simply standing side-by-side,” Farid said. 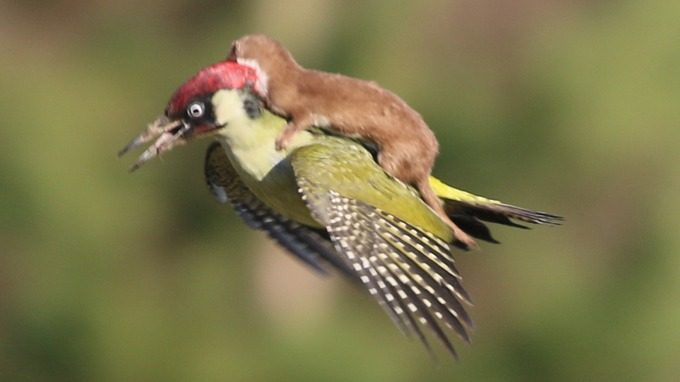 A close up of the image shows the woodpecker seems to be in fear for his life. Photo Credit: Martin Le-May

Farid concluded that the photo is likely real. A fact check on Snopes also indicates that this photo is real.

Wildlife expert Lucy Cooke told Snopes that weasels don’t often feed on birds, but they will if the birds get close enough to the ground.

“This is a truly extraordinary image. The green woodpecker is a ground-feeding bird, but weasels normally attack rabbits. The woodpecker is not its usual prey. But weasels are fearless. A female weasel weighs less than a Mars Bar but is as ferocious as a lion, so this is why the woodpecker would have been able to take off with it on its back,” Cooke said.

David Mizejewski, a naturalist with the National Wildlife Federation, in Virginia, said while this event may not be very common, it does make sense. 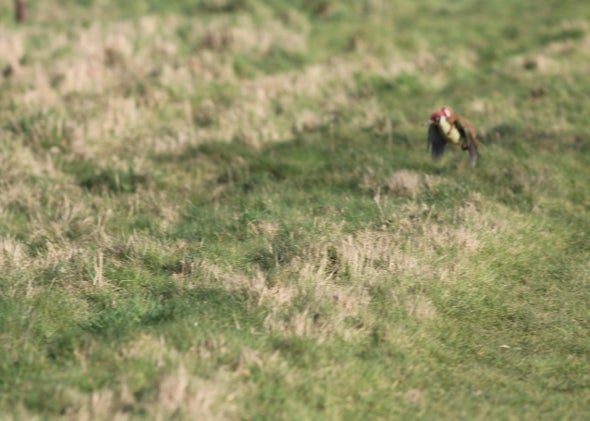 “While it looks like a bizarre event, it’s really not all that surprising if you know a little bit about these two species,” Mizejewski said.

As cute as Weasels may be, Mizejewski says that they can be quiet violent.

“The least weasel’s signature move is to sever the spinal cord of its prey with a bite to the neck, which is exactly what we’re seeing in the photo. The natural world is filled with wonders, and we have the chance of observing them firsthand if we get outside to experience them,” Mizejewski said.

The majority of woodpecker species feed on insects and other invertebrates that live under bark and inside of trees.  The diet includes ants, termites, beetles and their larvae, caterpillars, spiders, other arthropods, bird eggs, nestlings, small rodents, lizards, fruit, nuts and sap, according to Wikipedia.

Woodpeckers are tough birds, but would certainly have trouble holding their own in a fight against a weasel.

What do you think about this crazy once in a lifetime sight, captured by this amateur photographer?

Tensions between the yellow vest protesters and the police have boiled over again, as the protests in France become more violent. Demonstrators seem to be losing faith in President Macron’s attempts to solve the important issues that have divided the country. In December, Macron attempted to appease angry protesters with $11.2 billion in tax cuts…

(ANTIMEDIA) After coalition forces captured Saddam Hussein in December 2003, John Nixon, a senior leadership analyst with the Central Intelligence Agency (CIA) from 1998 to 2011, interrogated the former Iraqi dictator. The detailed account of this interrogation is now available to the public in the form of a book, Debriefing the President: The Interrogation of Saddam…