By: Baxter Dmitry via yournewswire.com

Kanye West is wanted for questioning by police as a suspect in the Paris robbery case after more evidence has emerged suggesting the jewelry theft was an “inside job.”

Police believe somebody close to Kim Kardashian helped tip off the thieves and Kanye West, though performing at Meadows Festival in New York at the time, has been summoned to the French capital for questioning.

A police source, describing the case as “one of the strangest” they have worked on, said Kanye has “been evasive” and has yet to agree to dates for his hearing.

The bad news for Kanye is that the United States does have an extradition treaty with France, although there has been a history of reluctance on both sides to honor it.

However if French authorities provide enough evidence that the robbery was an “inside job” insurance scam, there will be enormous heat on Kanye to appear in Paris and clear his name.

“I would say it’s either an inside job or publicity stunt. That hotel is so secure, somebody must have tipped them off that she was alone inside, or shown them a way in.”

“First thought as soon as I read this ‘story’ was this is a bullshit insurance scam. Kanye was complaining he’s broke and needs millions just a couple months ago, now 11 million dollars of jewelry happens to get stolen. No witnesses? No cameras in the hotel? No security, just one concierge? Why would she have $11 million dollars worth of jewelry on her? This reeks of a scam.“

Kanye, 39, who believes anyone who lives within their means “suffers from a lack of imagination,” declared he was $53 million in debt in February this year.

“Detectives are satisfied that the robbers could have easily tricked their way into Kardashian’s apartment block, [but] it is not clear how they got into her actual flat,” the source said. “The baffling part of the inquiry is how the robbers got into the apartment. Of course it’s possible they tricked their way in, but at that time of the [early morning] it’s unclear who actually opened the door.”

The source added that the entrance to Kardashian and husband Kanye West’s apartment in the secretive, luxury building known as the Hôtel de Portals is “armored” and “easily locked from the inside.” 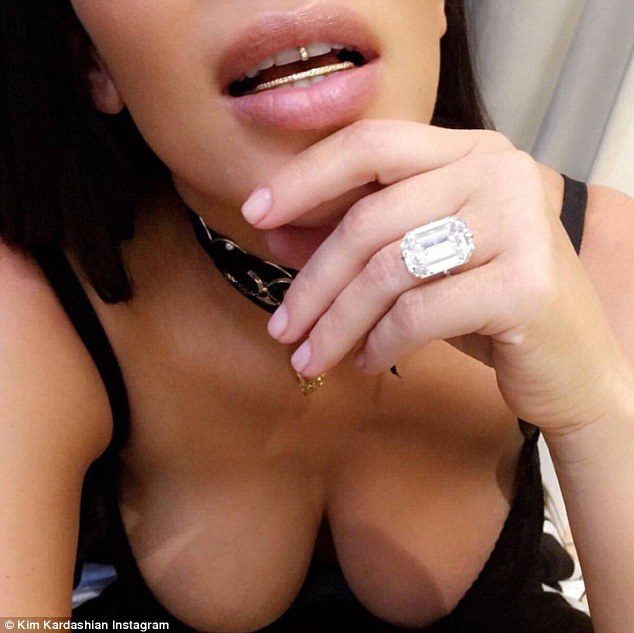 Kim showed off her weighty engagement ring and a diamond-encrusted grill on Instagram just hours before the robbery.

“We are dealing with a young woman who was practically alone with a hugely valuable amount of jewelry,” the source continues of the “strange” investigation. “She would never open the door in the middle of the night in these circumstances, so who did if it wasn’t opened with a key? There were no signs of forced entry, but there’s also no proof that a key was used.”

Jeanne d’Hauteserre, mayor of the eighth arrondissement of Paris, in which the apartment is situated, believes it is likely that a local gang was involved.

“There have been a number of attacks in recent times, notably of watches, and then of people attacked in their own apartments,” d’Hauteserre said. “Now that this is all a big news story, we hope that the famous gang or gangs will be dismantled and arrested.”

Adin Ross is a YouTuber and Twitch streamer mostly known for his Grand Theft Auto V and Grand Theft Auto Online gameplays. With over 5.3 million total followers, Adin is one of the most popular streamers on Twitch and has maintained steady popularity over the years. Adin is known for his funny roleplays, commentary, and…

Benny Blanco is the stage name of Benjamin Joseph Levin, a world-renowned record producer, songwriter, record executive, and DJ. Benny has been producing and writing songs since 2007 and has collaborated with artists like Justin Beiber, Ed Sheeran, Kanye West, Selena Gomez, Rihanna, Britney Spears, and more. Benny has also released singles and is a…

Mr. Organik is the internet alias of rapper and social media personality Jarvis Rivers. Rivers has been active on YouTube and other social media platforms for nearly a decade and has amassed a strong following. He has translated his success into a musical career with his multiple singles. Some notable tracks of his include WRAITH,…

Shéyaa Bin Abraham-Joseph, known by his stage name 21 Savage, is a Grammy Award-winning rapper. Having been signed with Slaughter Gang Entertainment and Epic Records, Savage has been active since 2012. He has released two studios alongside his multiple hit singles and collaborations with other successful rappers. With multiple Gold and Platinum records to his…

Fantasia Monique Barrino, shortened to just Fantasia, is an R&B singer known for being the winner of the third season of American Idol. After her victory, Fantasia released a single and an album, both of which made her a music sensation in no time. Since then she has released multiple singles, and albums, and turned…

George Edward Lopez is a comedian and actor, arguably best known for his work on the sitcom that he himself created and named after himself. The show “George Lopez” ran from 2002 to 2007 and saw Lopez play a fictionalized version of himself. Lopez received fame, fortune, and multiple awards thanks to the sitcom that…