By: Taylor Rogers via yahoo.com

In the six days before President Trump announced his decision to withdraw from the Paris Agreement on climate change, an enormous crack in an Antarctic ice shelf grew 11 miles, according to a report by British Antarctic research group Project MIDAS.

The crack, which is located in Larson Shelf C, leaves only eight miles of ice connecting what could be one of the world’s largest recorded icebergs to Antarctica. When it eventually breaks free from the continent, the resulting iceberg will measure 31,000 square miles, represent 10 percent of the ice shelf’s original mass and be larger than the state of Rhode Island.

The growth spurt between May 25 and May 31 was the largest they have observed since January, Project MIDAS says, and the inevitable splintering of Ice Shelf C will drastically alter the landscape of the continent and will make the ice that remains less stable. The group states that although this specific crack was not likely caused by climate change, the disintegration of Antarctic ice shelves contributes to rising sea levels that threaten coastal cities.

“When [ice shelves] disappear, ice can flow faster from the land to the ocean and contribute more quickly to sea level rise,” Adrian Luckman and Martin O’Leary of Project MIDAS wrote in February. 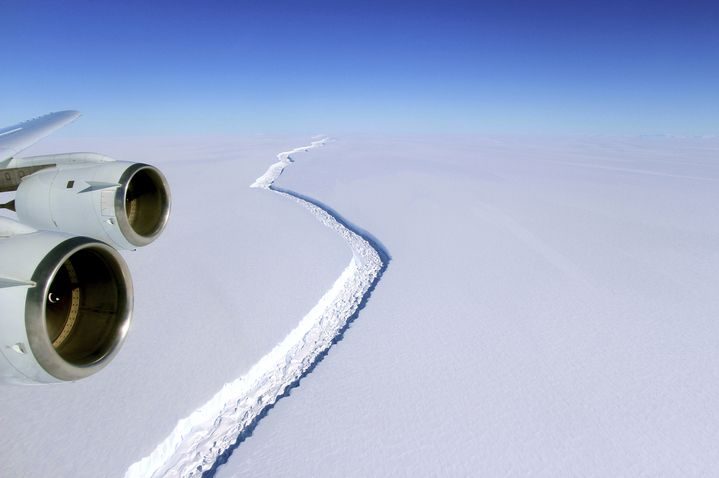 Rising sea levels endanger heavily populated cities such as New York, San Francisco, New Orleans and Miami, and are predicted to cause 13.1 million Americans to relocate from coastal areas by 2100. Concern about rising sea levels was one of many factors that inspired the Paris Agreement’s goal of limiting the rise of global temperatures.

Project MIDAS expects the ice shelf to mimic the break up of Larson Ice Shelf B, which shattered over a period of two weeks in 2002.

“The calving event will probably be slow and graceful,” the scientists of Project MIDAS wrote. “The ice is already floating, so when the fracture breaks all the way through, it will simply start to drift away.”

The group is unsure exactly when the rapidly growing crack will cause Ice Shelf C to break free from Antarctica, but believes that the rift has now reached a region of soft ice and that there is very little holding the ice shelf together.

“We are watching with bated breath,” the team wrote.

Human civilization may only last a few more decades, according to an alarming new report from an environmentalist think tank. The organization that released the report is a Melbourne based group called “the Breakthrough National Centre for Climate Restoration.” While this is a report from an advocacy group, which are usually seen as somewhat biased,…

What you are about to see are eye-opening photos from deep inside the North Korean regime of Kim Jong Un. North Korea is rightfully known as one of the most oppressive regimes in the world and the government there works very hard to keep the conditions that exist within the country a secret from the…

This week, doubt has been cast on the allegations of abuse that were made against Michael Jackson in the HBO documentary Leaving Neverland, after Jackson’s biographer found discrepancies in the official timeline. Author Mike Smallcombe, who wrote the Michael Jackson biography “Making Michael” has investigated the claims made in the film and has found that…