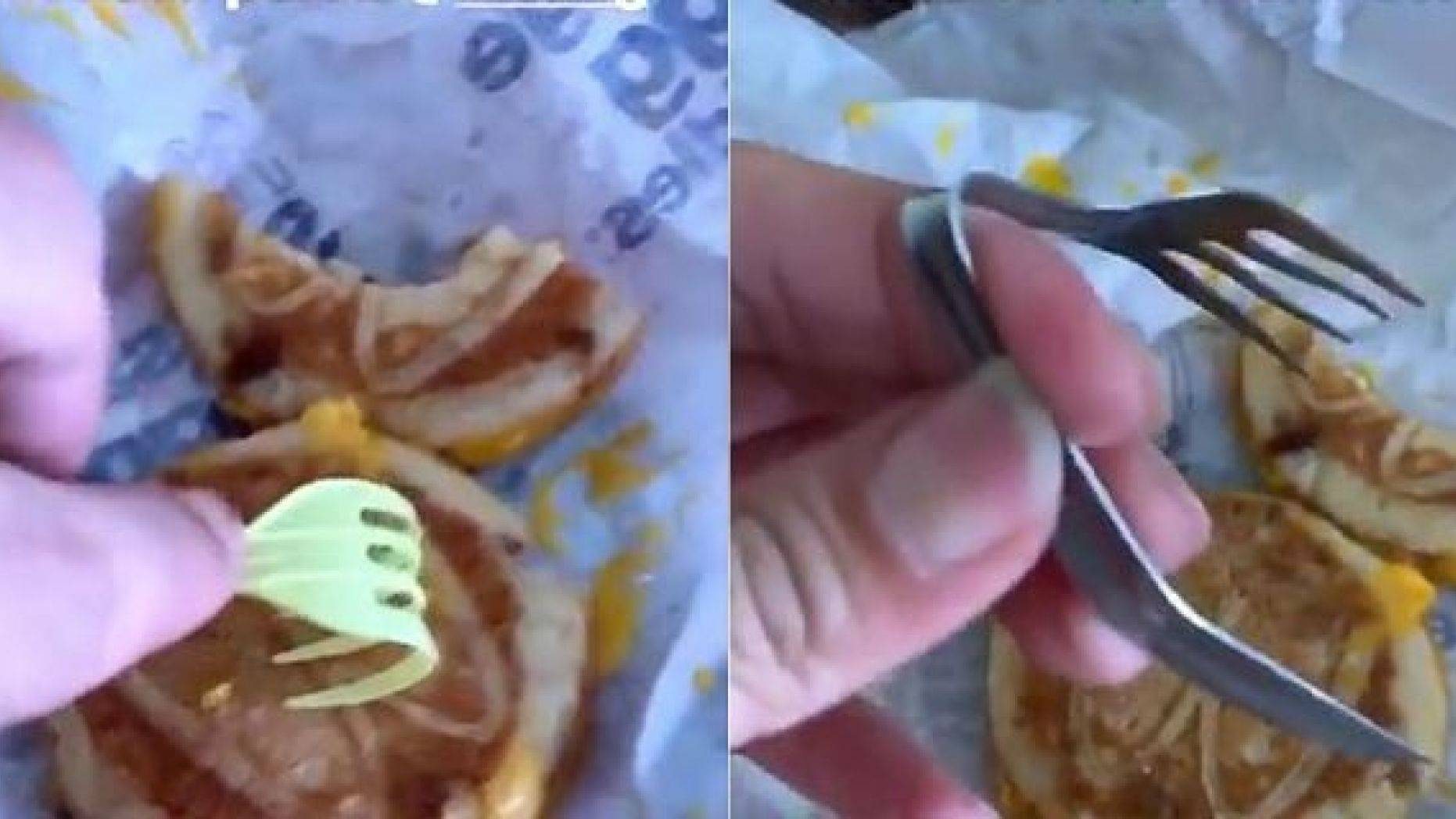 Last week, a McDonald’s customer in Singapore ordered a McGriddle breakfast sandwich but found that it was as hard as a rock when he unwrapped it. Edwin Edl, the victim of the mishap, posted on Facebook to show his friends just how bad the situation was.

The McGriddle sandwich was so hard that he broke a plastic fork trying to cut it, and then bent a metal fork as well. Next, Edl took out some tools to see if they could put a dent in the rock hard sandwich.

Edl even attempted more theatrical stunts, like throwing the McGriddle off the side of a building or running it over with his car, neither of which did the trick.

“Proudly present to you Sausage McRock with egg,” Edl wrote in the caption of a video he posted to Facebook.

The McGridle finally broke open once Edl tried to strike it with a hammer and a nail.

“@mcdsg did a really good job on making McGriddles so tough,” Edl said.

Edl’s post quickly went viral after being published and received reactions from all over the world.

“LOL, I’m about to eat Mac Breakfast and I saw this video😂🤣 got me dead,” one user commented.

“babe omg I haven’t laughed this much for the longest time,” another wrote.

Some people were grossed out by what they saw, but Edl said that he is not ready to give up on McDonald’s and that the McGriddle is his “favorite McDonald’s breakfast of all time.”

Edwin also said that McDonald’s did reach out to him to clear up the issue and that he was pleased with their customer service.

This is one of many gross reports that we have received from McDonald’s customers and employees over the years.

In one of the most disturbing cases we have seen, a McDonald’s employee from Laplace, Louisiana was fired after posting photos showing how dirty the inside of the ice cream machine at his store was. The incident happened in 2017, but is a cautionary tale to anyone who eats at McDonald’s.

According to a Dateline investigation of the most popular fast food restaurants in the United States, “the 100 McDonald’s we looked at came in with a total of 136 critical violations. Some didn’t have a trained and certified food handler on the job, required by law in many states.”

A BBC investigation published in 2017 found that the ice at fast food places like McDonald’s is contaminated with bacteria. While McDonald’s was found to have dirty ice in the investigation, KFC and Burger King were far worse.

A study recently conducted by researchers at London Metropolitan University found that touchscreens used by customers at multiple McDonald’s locations were covered in fecal bacteria. Dr. Paul Matawele, one of the lead researchers in the study, explained that the spread of this bacteria could lead to serious infections.

Luckily, fast-food seems to be falling out of favor, especially among younger people who are seeking more healthy alternatives.

To kick off 2015, the company closed at least 700 of its stores. In the first three months of that year, McDonald’s saw a 2.3% decrease in sales and a 28% drop in operating revenue.

At the time, the company’s incoming CEO, Steve Easterbrook said that massive changes would be needed to improve McDonald’s struggling reputation.

“I think there is a hunger and an interest in our business to embrace change. McDonald’s management team is keenly focused on acting more quickly to better address today’s consumer needs, expectations, and the competitive marketplace,” Easterbrook said.

Clinging on for dear life in the marketplace, the fast food icon announced a $300 billion acquisition of Dynamic Yield, a big data company. This acquisition is the company’s largest purchase since it acquired Boston Market twenty years ago.

The McDonald’s menu may not be as popular as it once was in the United States, but they are still one of the top-grossing corporations in the world  Last year alone the company reportedly brought in over $6 billion of net income and ended the year with a total of $4.2 billion after expenses. According to a report from Wired, McDonald’s is trying to find ways to make use of, and especially monetize, the large volume of data that flows through their global network of stores each day.

Authorities in Cary on Wednesday arrested a 17-year-old from Morrisville in connection with an October 2015 computer hacking incident at Panther Creek High School in Cary. Saivamsi Hanumanthu, resident of Pilot Hill Drive in Morrisville, was charged with felony accessing government computers, felony breaking and entering and misdemeanor accessing government computers. If convicted on all…

By: Vandita via anonhq.com Children younger than 15 – some as young as 5 – work from 6 am till evening in West Africa at cocoa farms connected to Nestlé, Hershey, Mars, Kraft, ADM Cocoa, Godiva, and Fowler’s Chocolate to produce your favorite chocolates including Reese’s, Kit Kat, M&M’s, MilkyWay and Butterfinger. In September 2015,…

By Luke Miller Truth Theory Firstly I would just like to say, this article is not being put here to instill fear in anyone, it is hard not to be a little shaken by what has been discovered, but there are people who understand what is happening and we have the power as the people…