This oil leak proves that everything the Native Americans are worried about will eventually happen to their land.

As Native American tribes continue their marches in various cities to show their support for the Standing Rock Sioux Tribe, a major pipeline in the Southeast recently broke and major media outlets remained silent.

Though some did report the spill on their websites, the focus of the news was on the impending gas shortages and the rise of gas prices caused by the spill. At the heart of mainstream media is always how news will affect consumers rather than the ecological repercussions.

The Colonial Pipeline, which has main lines running through about ten states, ruptured in Shelby County, Alabama and leaked 250,000 gallons starting on September 9th before it was closed.

Six thousand barrels were spilled and found to be leaking at an inactive mine site, where hundreds of employees and contract workers are now risking their health to clean up the mess. The vapors from the large amounts of gasoline in the confined area are a risk to the workers if inhaled.

The U.S. Occupational Safety and Health Administration has been monitoring the area so that the crew knows when it’s time to leave the area. Thankfully, the airspace above the leak has been secured by federal authorities.

Though authorities are handling the disaster, gas may still be leaking from the pipeline even though it was closed on Friday. The section of the pipeline that was leaking has yet to be examined due to safety precautions, so the condition and cause of the leak have not been determined. 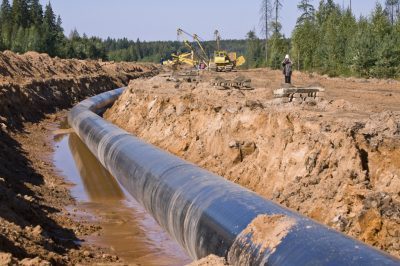 As for the ecological impact, the spill was reported as being contained in a mining retention pond and the owner of the pipeline and the EPA have been working together to make sure it doesn’t reach nearby rivers, creeks, and streams. Cahaba Riverkeeper David Butler has been helping to monitor the spill and is impressed with the swift response by Colonial.

Both Alabama and Georgia have declared a state of emergency and warned their citizens of gas shortages and the potential rising prices. Alabama Governor Robert Bentley reminded Alabama residents, “it is unlawful for any person within the State of Alabama to impose unconscionable prices for the sale of any commodity during the period of a declared State of Emergency.”

In the midst of this silent pipeline leak, the protests against the North Dakota Pipeline are continuing across the country. The Standing Rock Sioux Tribe has been against the construction of the pipeline for the past two years because of the risk it poses to their water and the violation of their ancestral land. They have pointed out that all pipelines leak at some point, and that building it guarantees that their land will be ruined. This most recent leak is proof of the danger that oil pipelines pose, and the silence surrounding it shows that mainstream media is caught up in harboring those dangers.

The cancer industry is making more than 100 billion dollars a year, but it is still unclear why the actual cure is nonexistent. Many people are trying to find the cure for cancer, yet to this date it is unknown. Yet the name of Dr. Raymond Rife has been quite familiar within the industry. Dr….

By: Aaron Kesel via wearechange.org WikiLeaks’ Vault 7 release of Central Intelligence Agency (CIA) documents yesterday opened eyes worldwide about an agency President John F. Kennedy once vowed to “splinter…into a thousand pieces and scatter it into the winds.” Here’s a comprehensive list of ten things we didn’t know about the CIA before last week…