The investigative blog LozzaFun1 had more information about Finicum’s death, which seemed more like an assassination if you actually watched the video, and according to Barbara Davis, things are exactly as they appeared to be. If you remember, the FBI claims that they found a 9mm pistol in Finicum’s pocket after searching his lifeless body, but there’s eyewitness reports that he and the people with him purposefully left the weapons at the refuge in case they ran into law enforcement.

That same witness also claimed that the reason Finicum fled the initial stop is because he was being shot at by authorities.

The FBI’s claim is further called into question after seeing what Davis wrote on Facebook about the serial number. Apparently, members of the Pacific Patriots Network were able to run the serial number 54119868, and the weapon was stolen two years ago, so she believes it’s a plant. 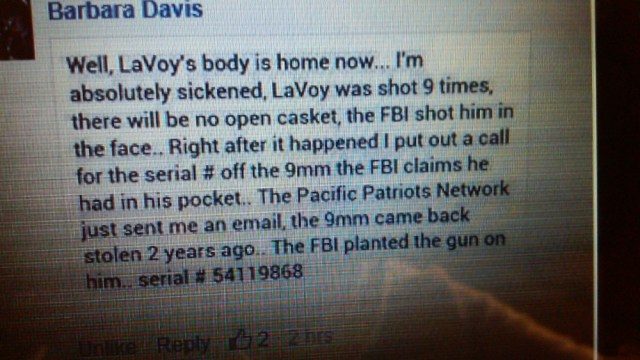 Also, when Finicum’s family received the rancher’s body, they discovered that he had been shot nine times by federal authorities. If you watch the video, that seems like entirely too many for the situation, considering that Finicum appeared to have his hands in the air just prior to being mercilessly gunned down. Davis also said that Finicum now has to have a closed casket funeral, thanks to being shot directly in the face.

While we’ll never know exactly what happened on that fateful day, as more evidence emerges, it seems as if the FBI had only one intention, and it wasn’t taking Finicum in alive. Look, as a proud conservative I always support law enforcement, but even this case has been hard for me to wrap my head around because not a lot adds up.

From the video showing Finicum having his hands up and grenades being thrown at his truck, to eyewitnesses recalling a scene more similar to a special operations hit, the entire thing doesn’t make sense. As such, I think We the People have every reason to question it, and that it’s our duty to do so.

Kanye West, 39, was hospitalized at UCLA Medical Center on Nov. 21 after police and paramedics responded to a “welfare check call” around 1:20 p.m PST at his trainer, Harley Pasternak‘s home, where Kanye was “acting erratically,” according to TMZ.  How terrifying! But one of the scariest parts of this developing story is that Kanye reportedly…

An NBC news report claims that Hillary Clinton, while secretary of state, shut down an investigation into an elite pedophile ring in State Department ranks in order to avoid scandal and protect the careers of high ranking officials and an ambassador.  [ynw] The NBC investigation was broadcast at a time when they were a real news organization rather than a branch of…