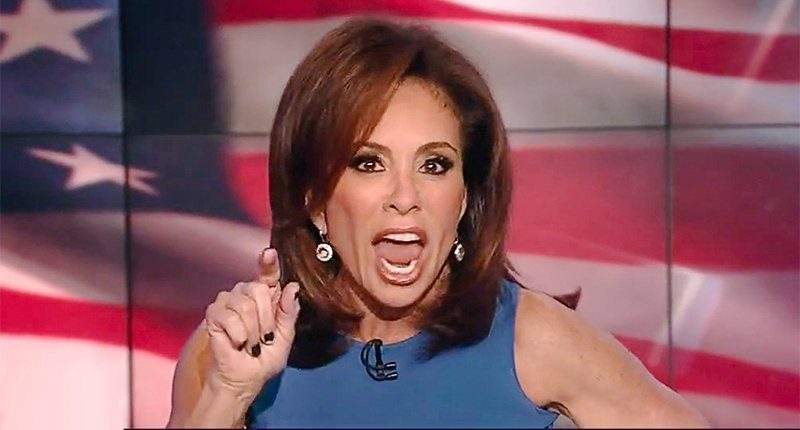 According to recent reports from inside sources at Fox News, multiple employees at the station conspired to get host Judge Jeanine Pirro suspended for her recent controversial comments.

The source indicated that the employees “secretly maneuvered to get Judge Jeanine Pirro suspended over her controversial remarks about Muslim Rep. Ilhan Omar (D-MN), with one, Bret Baier, allegedly seeking to curry favor with Democrats to reverse a decision to not allow Fox to host any of the party’s presidential primary debates by getting Fox to suspend Pirro.”

Speaking to the Gateway Pundit, the secret source said, “The original complaint came from Bret Baier’s team. Bret saw an opportunity to make Fox News acceptable enough to the left, so he could get himself a job of hosting the Democratic Debates. Bret supported one of his producers, Hufsa Kamal, in tweeting out a condemnation of Judge Jeanine to put pressure on Fox News to suspend her show. Hufsa Kamal, a producer of Special Report with Bret Baier, has a history of anti-conservative tweets.”

The report from the Gateway Pundit also said that Shepard Smith, a known as a “never-Trumper”, also played a major role in the Judge’s suspension.

To appease the critics, Fox hired Jerry Andrews, an extreme leftist as Executive Producer of Justice with Judge Jeanine to “muzzle Judge Jeanine from speaking the truth.”

Judge Jeanine’s future at Fox News is still uncertain, especially after the network announced that they will be hiring former Democratic National Committee Chair Donna Brazile as a new contributor.

“Will I agree with my fellow commentators at Fox News? Probably not. But I will listen,” Brazile wrote after the announcement.

Oddly enough, Brazile was initially a panelist and contributor on CNN regularly, but she was let go after she was found guilty of corruption relating to the campaign of Hillary Clinton.

“I will also freely admit the weaknesses in liberal arguments and the strength in conservative positions,” she added.

The Gateway Pundit indicated that, “Sources at Fox relayed to reporters at CNN and the New York Times on Sunday that Pirro has been suspended for two weeks for her comments about Omar and a possible conflict between her adherence to Shariah Law, as represented by her wearing a hijab, and her oath to defend the Constitution. The context of Pirro’s comments was the roots of Omar’s anti-Semitism and what it means for the future of the Speaker of the House Nancy Pelosi (D-CA) and the Democratic Party.”

Trump also urged the channel to put Jeanine Pirro back on the air.

The executives at Fox news seem to be bowing down to the liberal harassment and not standing by their conservative hosts.

It seems that there are many shakeups going on at the network, with many new hires. This week it was announced that former Speaker of the House Paul Ryan is joining the board of the new Fox Corporation, the parent company of Fox News. According to reports, the new Fox Corporation will be a spin-off network of sorts.

The LA Times Reported that “Fox News is also a crucial piece of the new company, as the news channel generates more than $1 billion in annual profit thanks to growth in cable and satellite subscriber fees and ratings that make it the most-watched channel behind the broadcast networks. Although Fox News has seen advertisers resist buying commercial time on the shows of its provocative conservative commentators, Madison Avenue still values the network’s audience because 90% of its viewers watch live.”

Popular Fox News host Tucker Carlson has also come under fire for comments he made long ago that have been dug up by liberal activists to discredit him. Although the left has been desperately demanding that the network fire the host, they have remained firm in their conditions to keep him on board. Carlson is without a doubt one of the rising stars of the network and one of their biggest sources of revenue, so it will likely take a lot more than some old comments to cancel his show.

It seems that now more than ever conservative voices are off limits, even on conservative channels in this new age of censorship.

By: Jay Syrmopoulos via thefreethoughtproject.com Washington, D.C. – With information coming out of WikiLeaks at a fast and furious pace, it’s difficult for the average person to keep up with the many bombshell revelations being exposed. This is happening so much that the most damning evidence is ending up as background noise in the 24-hour…