How many decades has it been, that the Catholic church has been accused of child seχ αbuse? Now that year after year, scandal after scandal, the church continues to be exposed in a way that still more than likely barely scratches the surface of what really goes on, people can dig up past warnings from celebrities and understand they weren’t lying.

For example, over 25 years ago in 1992, a musician named Sinead O’Connor made futile attempts to warn the people of the world about the Catholic church’s αbuses during a Saturday Night Live appearance, trying to hijack the stage to get truth out to people Anonymous style. 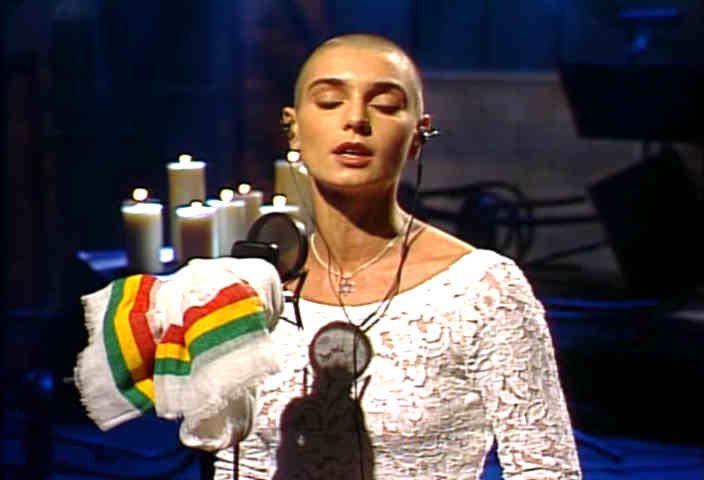 Needless to say, nobody listened: or at least not enough people of influence listened, and today we’re basically in the same position, as people aware of the Catholic church’s child seχ crimes and horrible αbuses: that position is the inability to stop it.

Actually today, the clip of this woman (video below) protesting the Catholic church has well over a million views, so it may have largely fallen on deaf ears back then, but today it’s a well known thing that happened. Unfortunately this kind of protest doesn’t do much.

The singer ripped a picture of then Pope John Paul II to shreds, while singing the song “War” by Bob Marley, opting to replace lyrics in the song about African apartheid to say “child αbuse, yeah.”

Perhaps the mainstream has no problem pretending to support anti-war songs, while simultaneously using their multi-million dollar media platform to promote wars in the same breath, because this form of protest isn’t that effective. Art is art, but at this point it’s 2018.

The Atlantic noted in 2012 that the singer’s performance back in 1992 was done with “spine-stiffening venom.” The article continued to suggest that the media failed to make “use of the traditional tools of journalism: interviews, research, and textual analysis. Instead, most commentators seem to have consulted their own imaginations.”

At the time when she did this, a Rolling Stone article was published about it:

“[I]s O’Connor’s aim to educate people about her point of view or to alienate them and insult their beliefs—as she did when she ripped up a picture of the pope on Saturday Night Live, ensuring that they will never take her seriously?”

In her interview with Time, she explained why she did what she did:

“It’s not the man, obviously—it’s the office and the symbol of the organization that he represents… In Ireland we see our people are manifesting the highest incidence in Europe of child αbuse. This is a direct result of the fact that they’re not in contact with their history as Irish people and the fact that in the schools, the priests have been beating the sh*t out of the children for years and seχually αbusing them. This is the example that’s been set for the people of Ireland. They have been controlled by the church, the very people who authorized what was done to them, who gave permission for what was done to them.”

Just type in “Catholic church seχ crimes” to your search engine, set the search engine to “news” maybe, and see what you find. This is reality.

It’s no longer controversial information that they are criminals in this way, people just don’t care enough or have the resources to stop them without risking their lives breaking the law.

The city of Athens in Greece was struck by a significant earthquake. The epicenter of the quake was just 22km, or 14 miles northwest of Athens. Many people were left without power after the 5.1 magnitude earthquake shook the city. During the chaos, people evacuated large buildings and poured out onto the street as the…

(rt) A new breast cancer cure has reportedly made tumors vanish in 11 days, with UK medics describing the results as “staggering” and “unprecedented.” Of those treated, 87 per cent responded to the cure, while 11 percent saw tumors disappear completely. During the recent European Breast Cancer Conference in Amsterdam, the UK team of doctors…