Once every 53.5 days, NASA‘s Juno probe screams over Jupiter‘s cloud tops roughly 75 times as fast as a bullet. The spacecraft has used these high-speed flybys, called perijoves, to document the gas giant like never before since August 2016. It records the planet with radar systems, radiation detectors, magnetic and gravitational field recorders, and more.

But NASA’s beautiful new images of Jupiter come from an optical camera called JunoCam. After each perijove, the space agency uploads the raw photo data to its websites. Juno finished its 12th perijove on April 1. Since then, people around the world have downloaded JunoCam’s raw black-and-white data, processed it into stunning colour pictures, and shared the files for all to see.

“Jupiter is in constant flux so it’s always a surprise to see what is going on in those cloudscapes,” Seán Doran, a graphic artist and a prolific processor of JunoCam images, told Business Insider in an email. He added that it can take hours to complete a single image. Here are some of the most dazzling portraits of Jupiter – and its shrinking Great Red Spot super-storm – that Doran and others have created in the past week.

During each perijove, which lasts a few hours, the JunoCam instrument uses a “push-broom” technique to snap a series of photos of the planet…

… Creating a zoom-in, zoom-out effect when looked at in sequence (from the world’s north pole to its south pole). 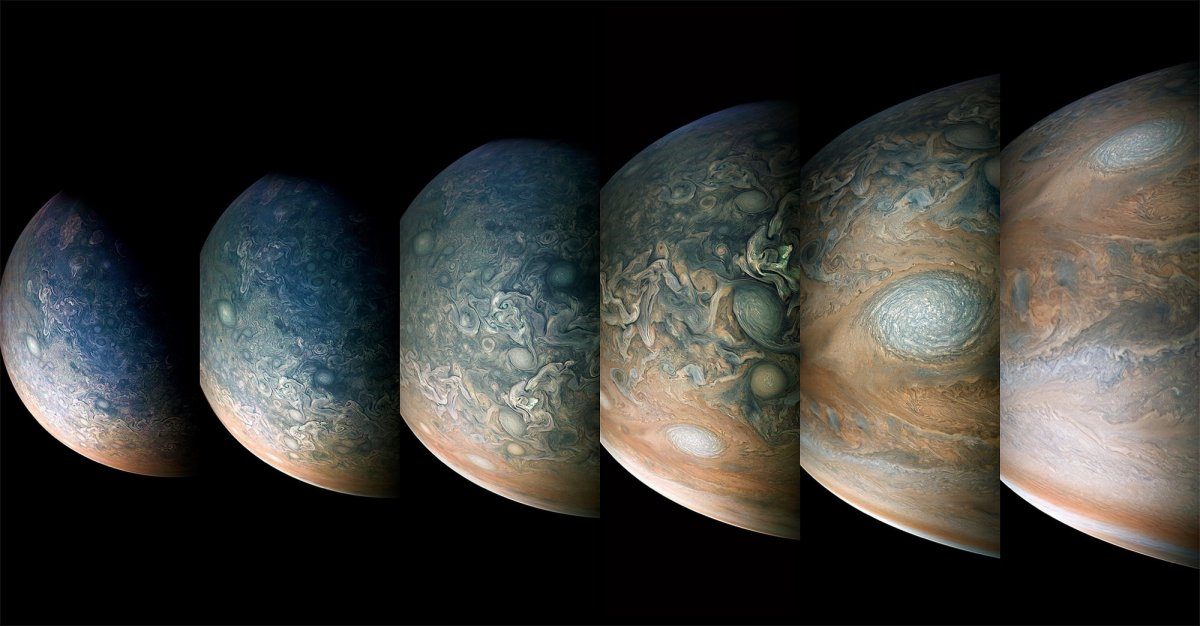 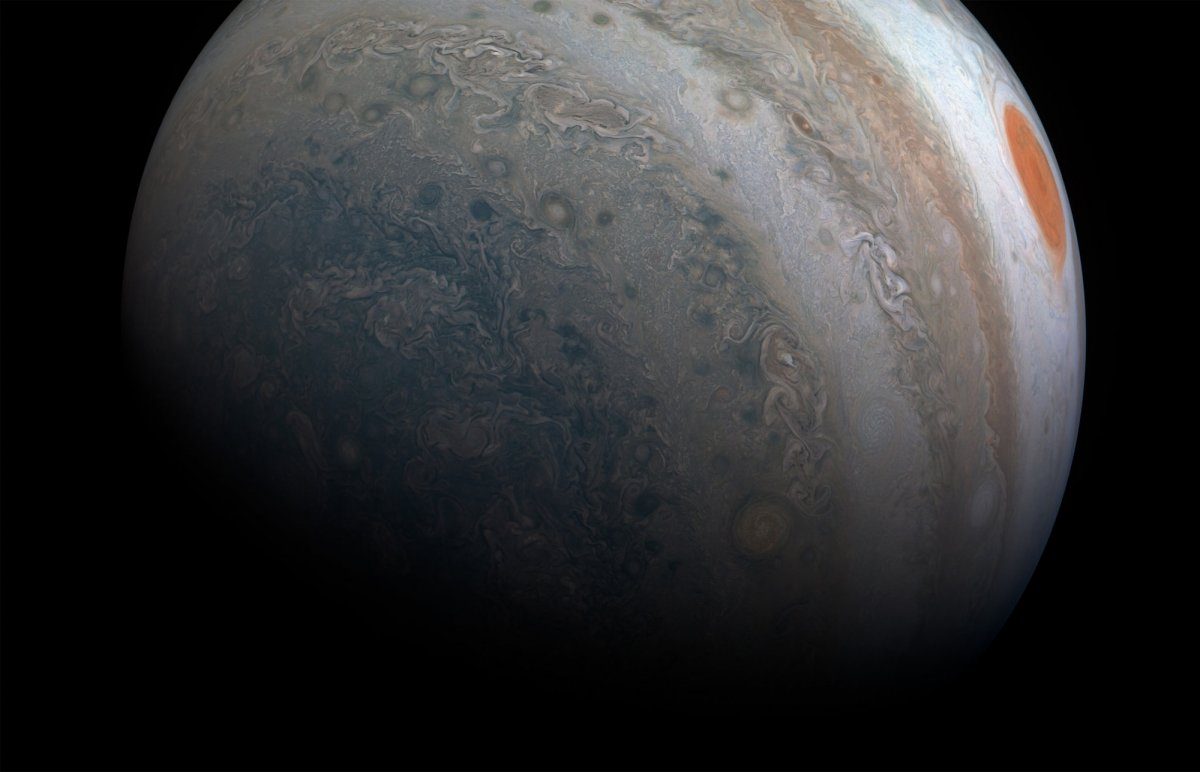 The layers can then be merged and processed into stunning planetary portraits, like this shot of Jupiter’s north pole.

Juno last saw the Great Red Spot, which could easily contain planet Earth, in July 2017, during its seventh perijove. 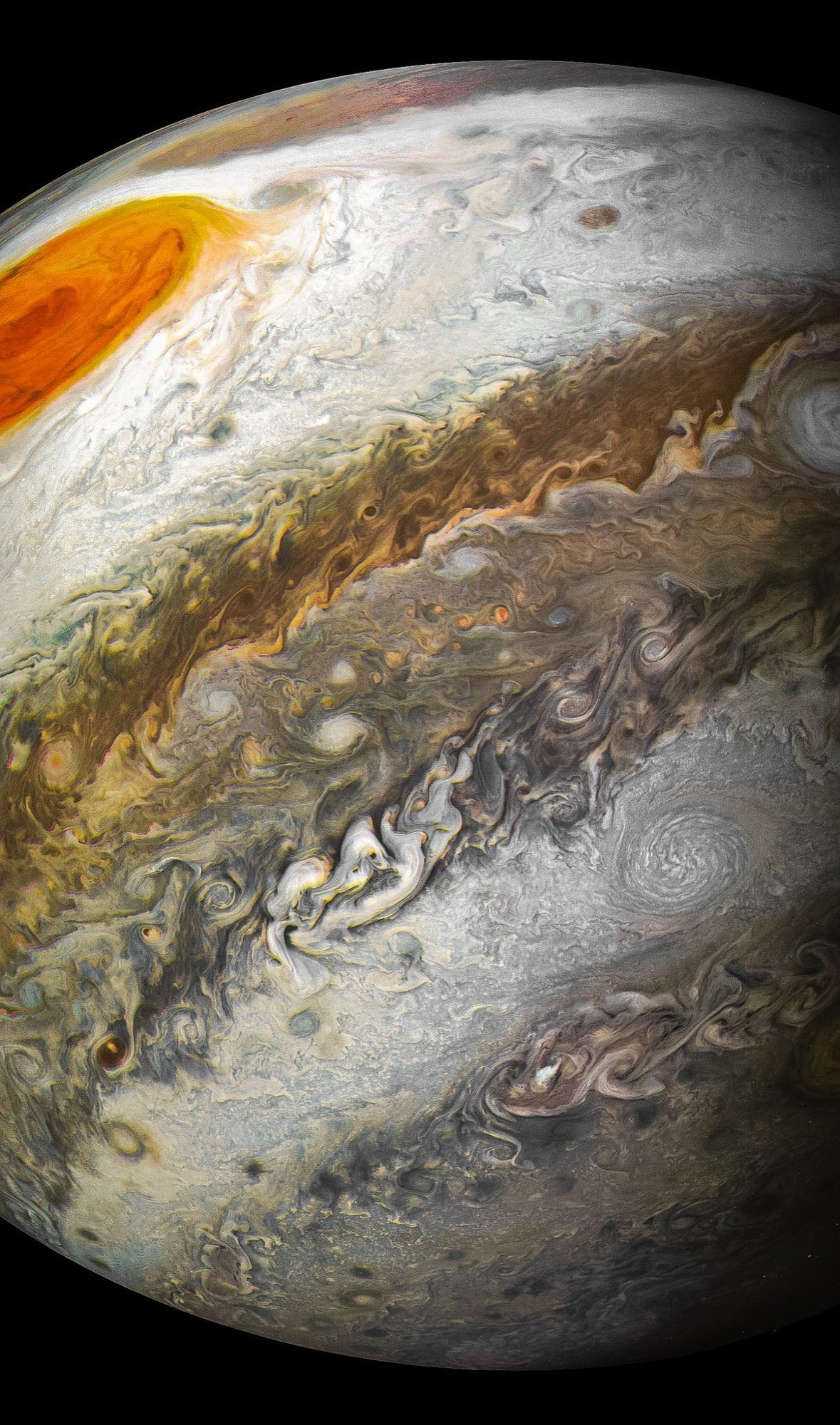 While the probe didn’t fly directly overhead this time, as it did last year, the latest images are nonetheless breathtaking. 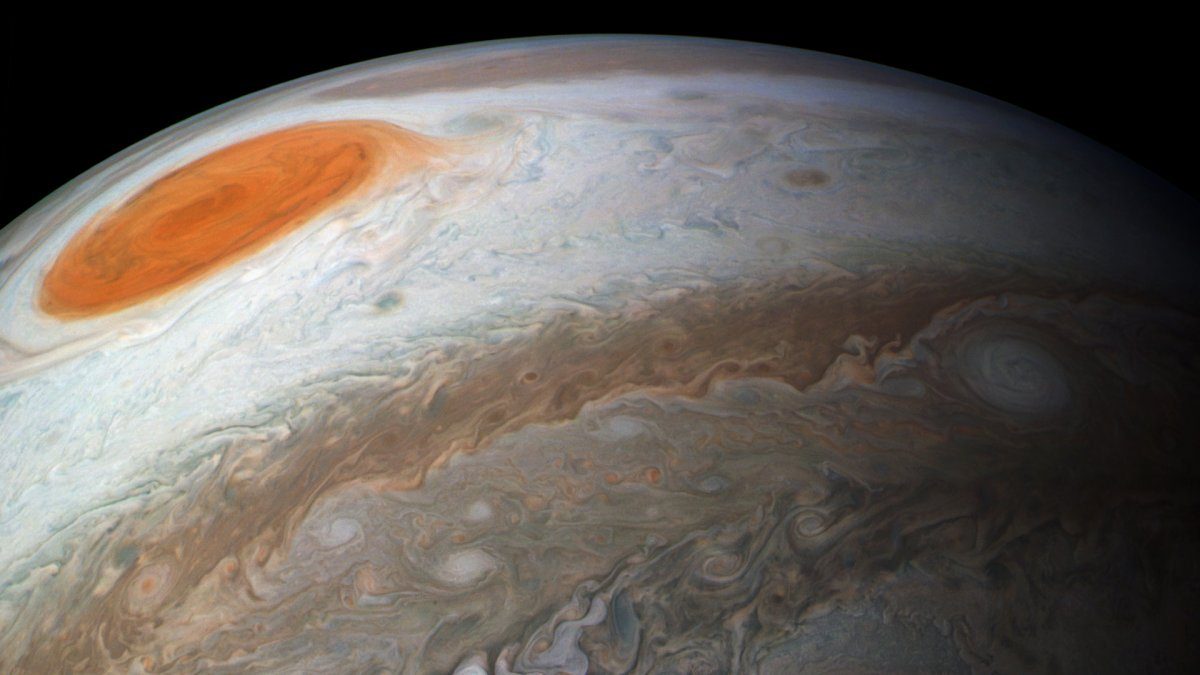 This one, processed by Doran, makes it look like Jupiter has an leering ruddy-red eye. 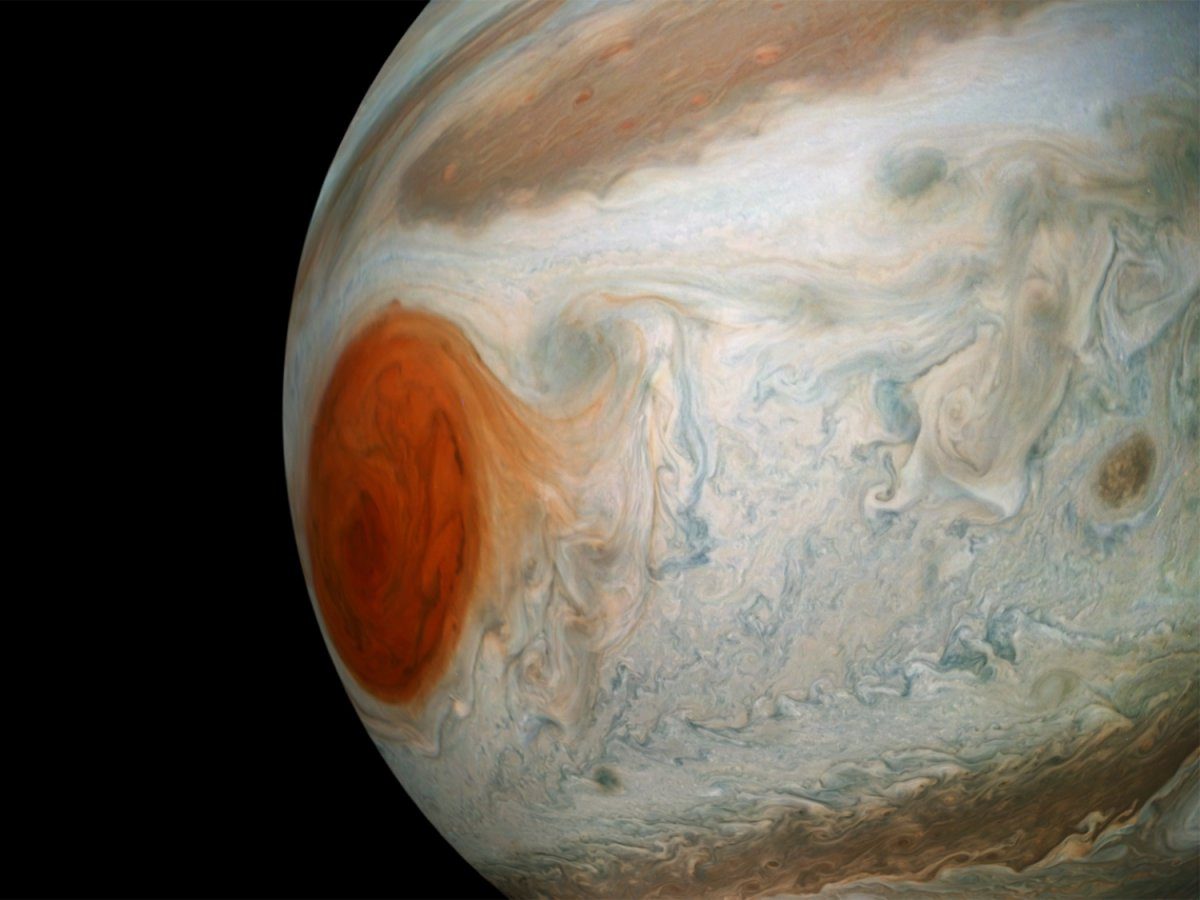 Smaller red storm cells are visible in a darker band near the Great Red Spot. 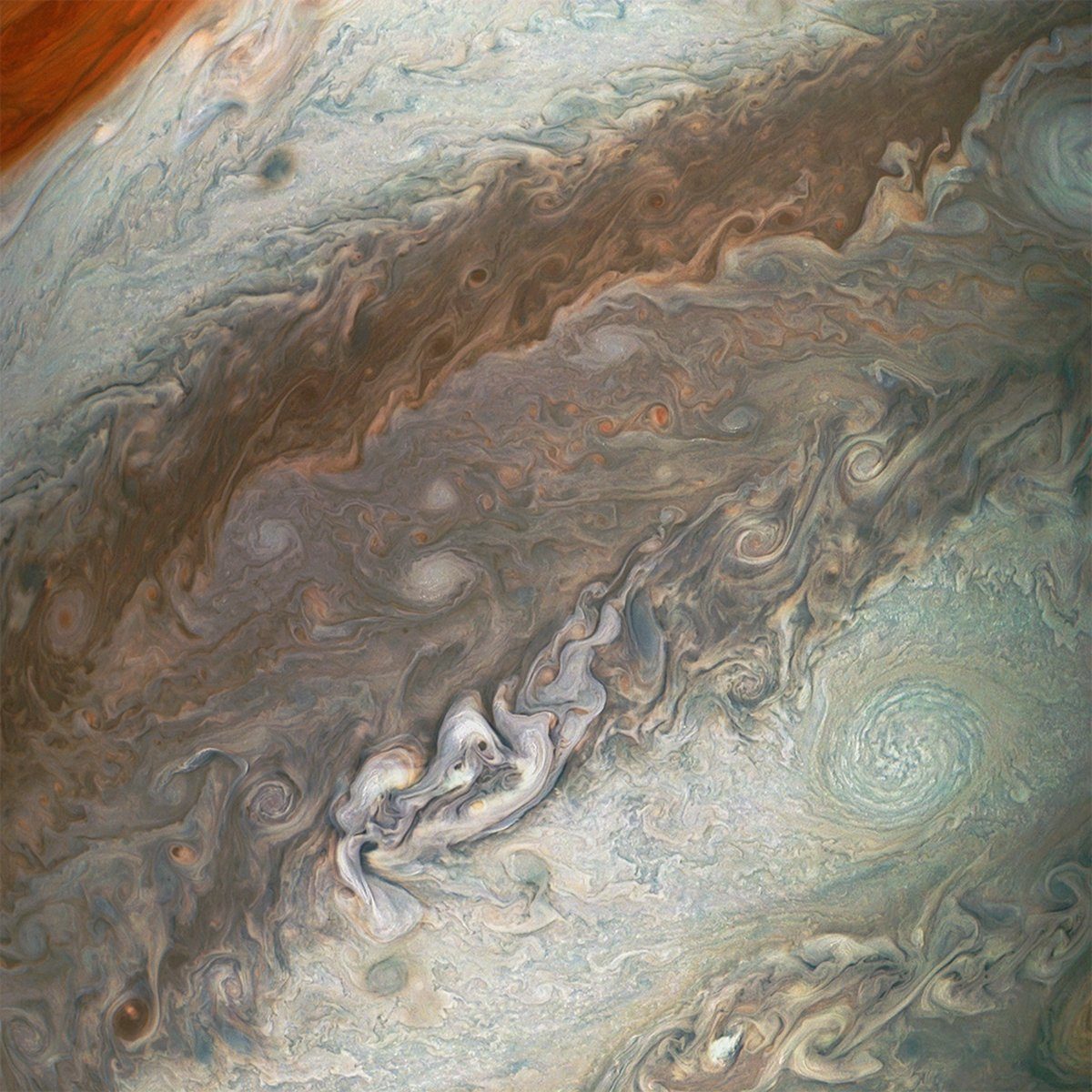 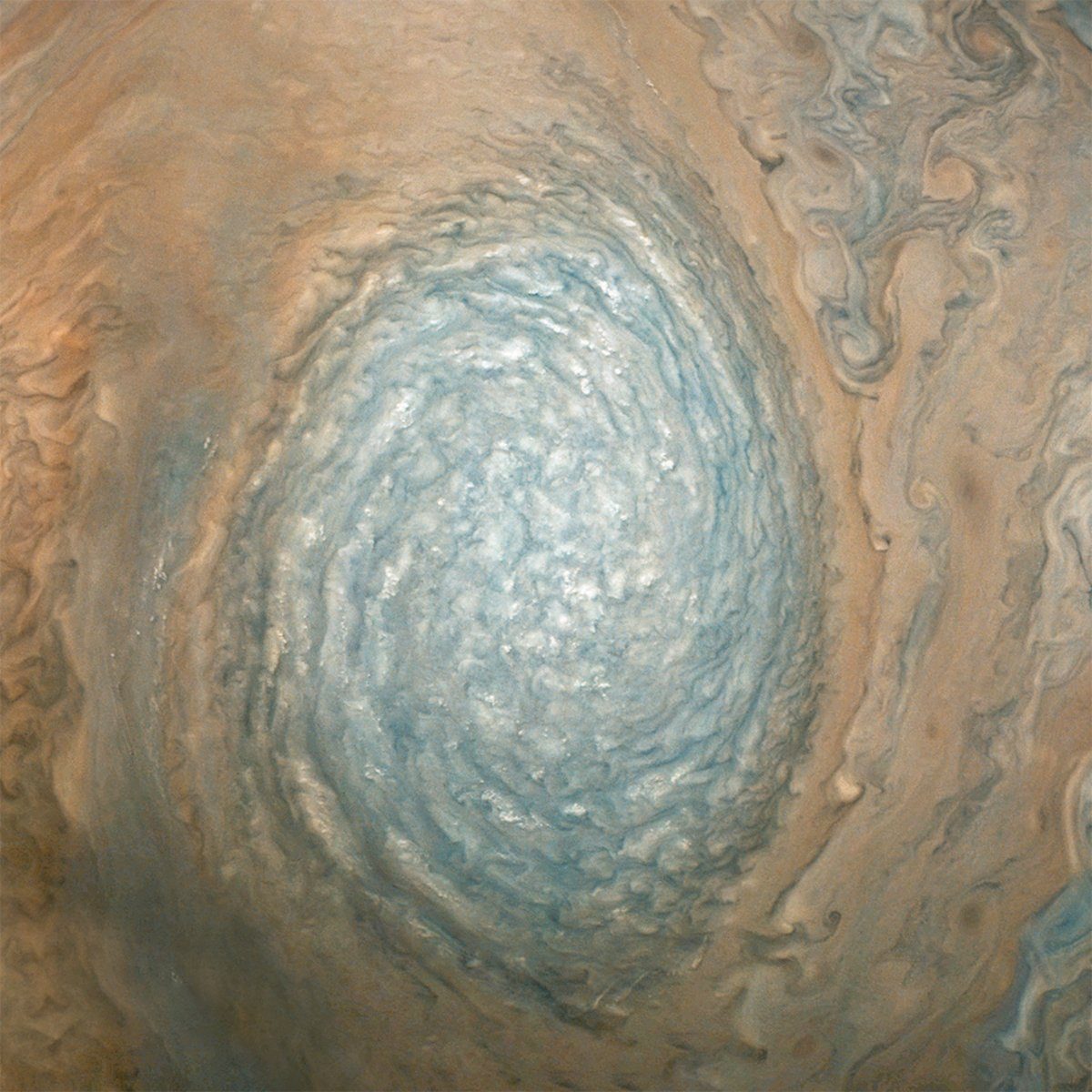 Other close-up photos show the mess of turbulence in clouds near the Great Red Spot. 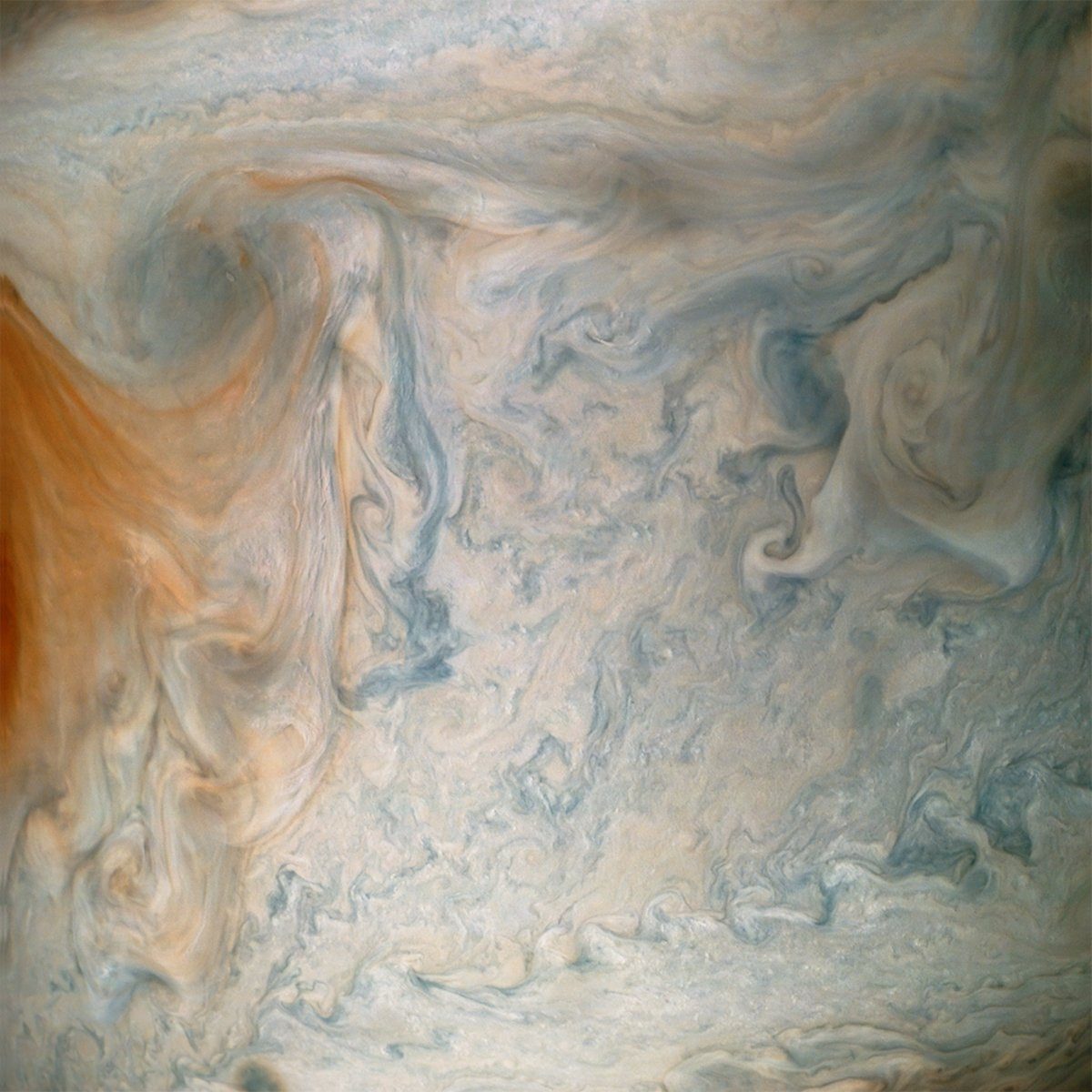 Near Jupiter’s poles, the patterns of storms are especially wild. 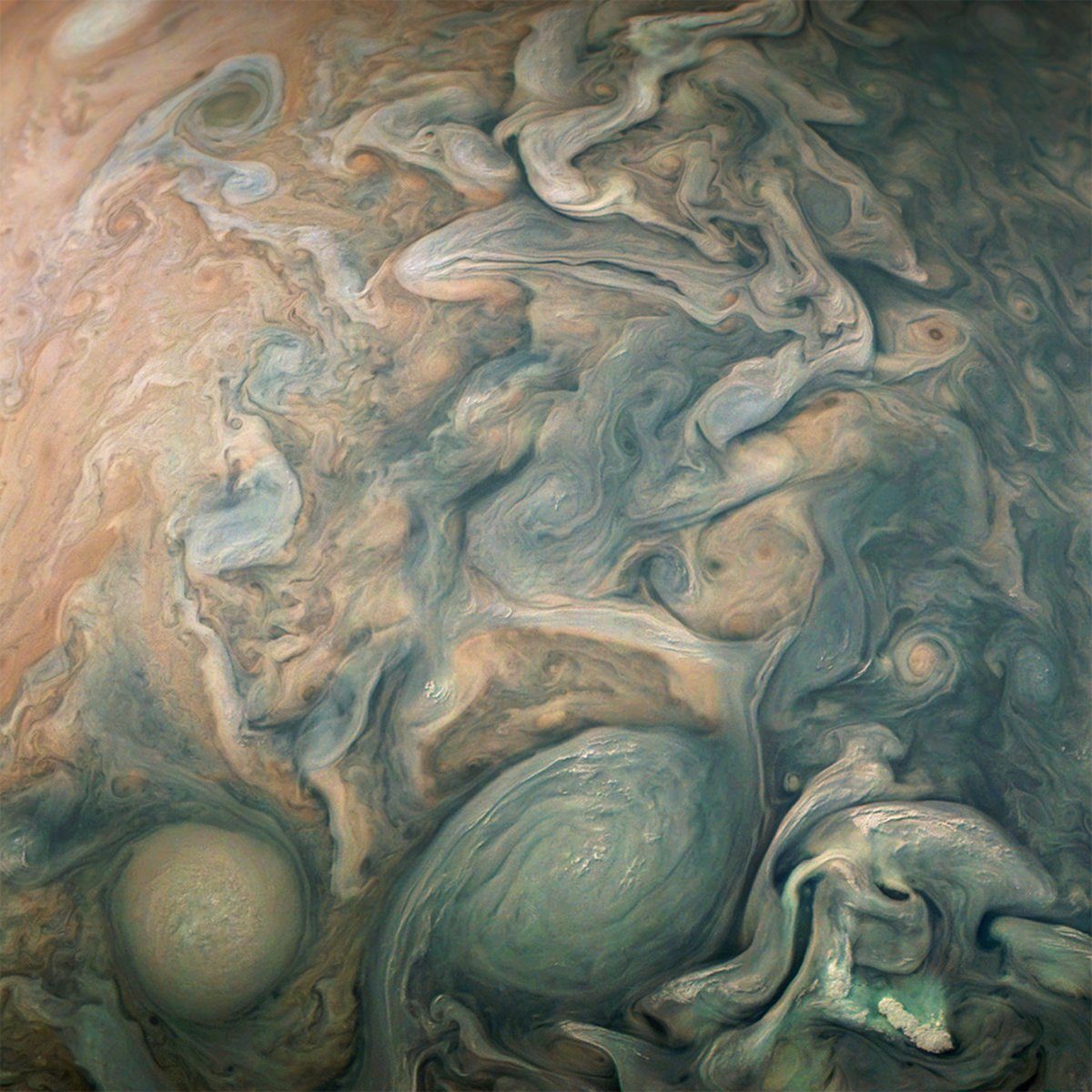 Chemicals like ammonia, which float high into Jupiter’s cloud tops, help give many polar storms on the planet a blue-green hue. 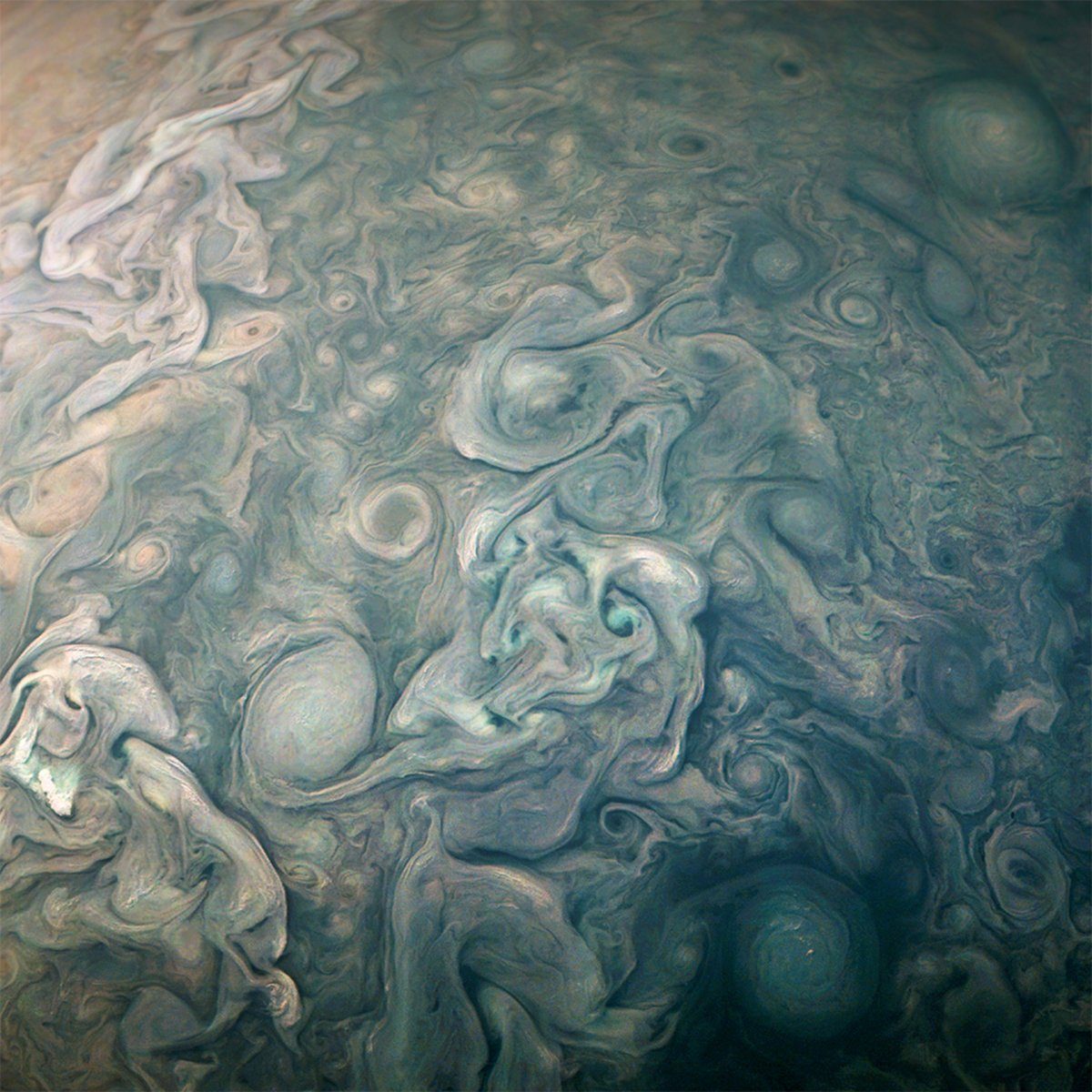 The details of clouds captured by JunoCam during its closest approaches are equally mesmerising. 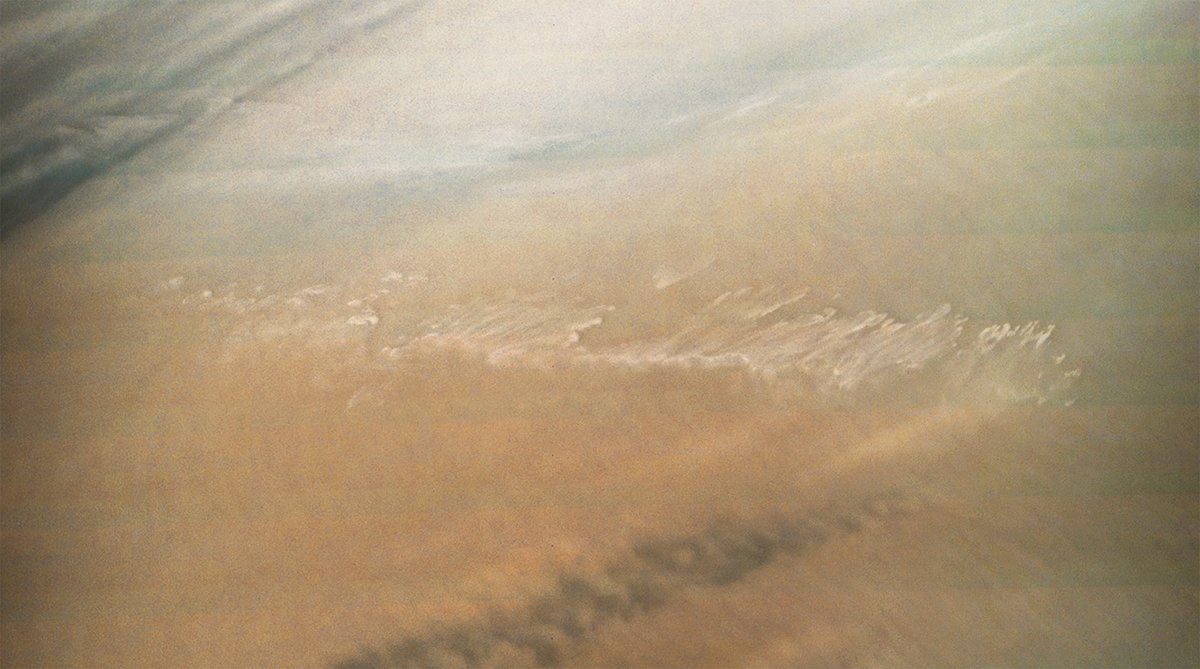 Juno passes within a few thousand miles of Jupiter’s cloud tops during the closest approach of each perijove. During this manoeuvre, the probe reaches a speed of about 130,000 mph. 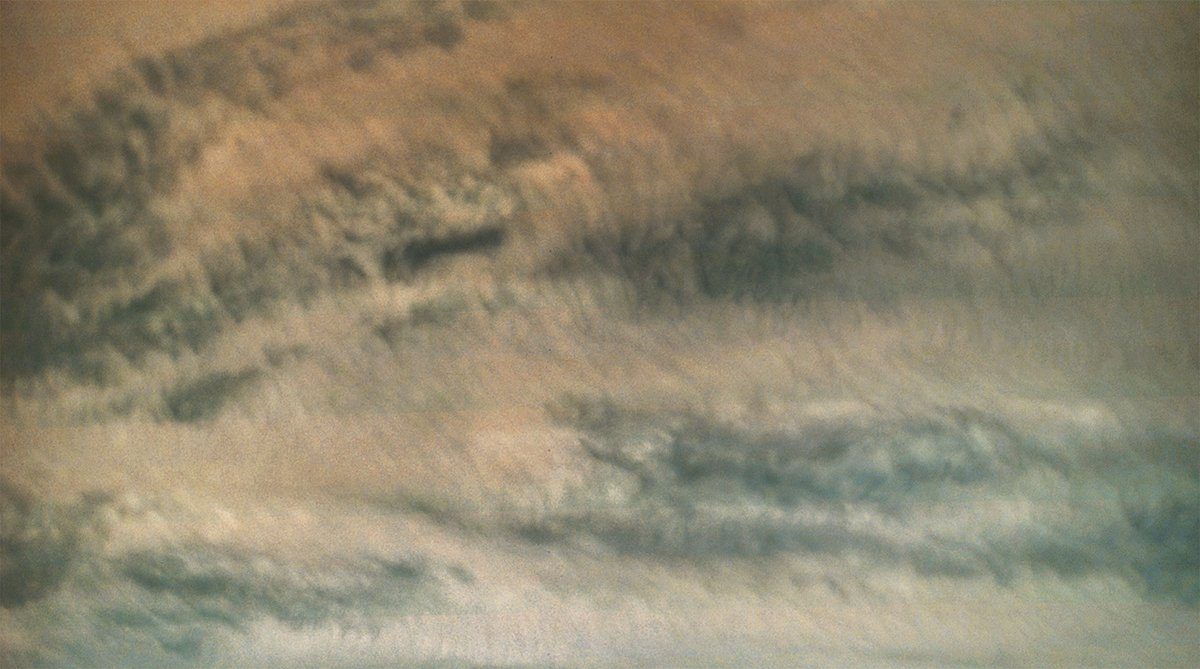 They’re learning other new tricks, too, and using them on older JunoCam data. This image shows how three separate photos of the Great Red Spot in July 2017 were stitched together. 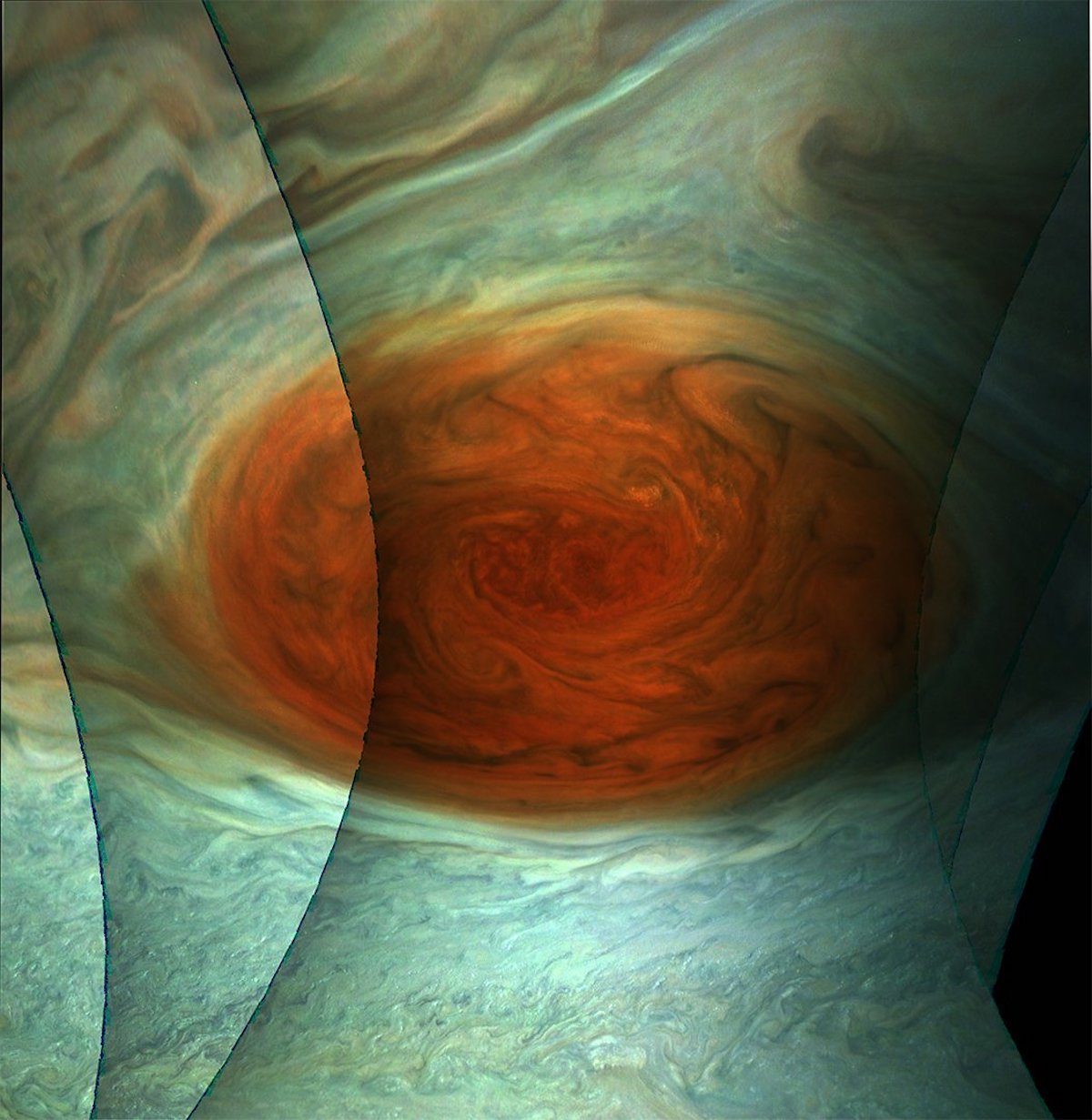 Doran said such composite images “afford us a wider and more complete view of certain regions on Jupiter than is possible with just one image.”

Here’s the finished, fully processed version of that image. 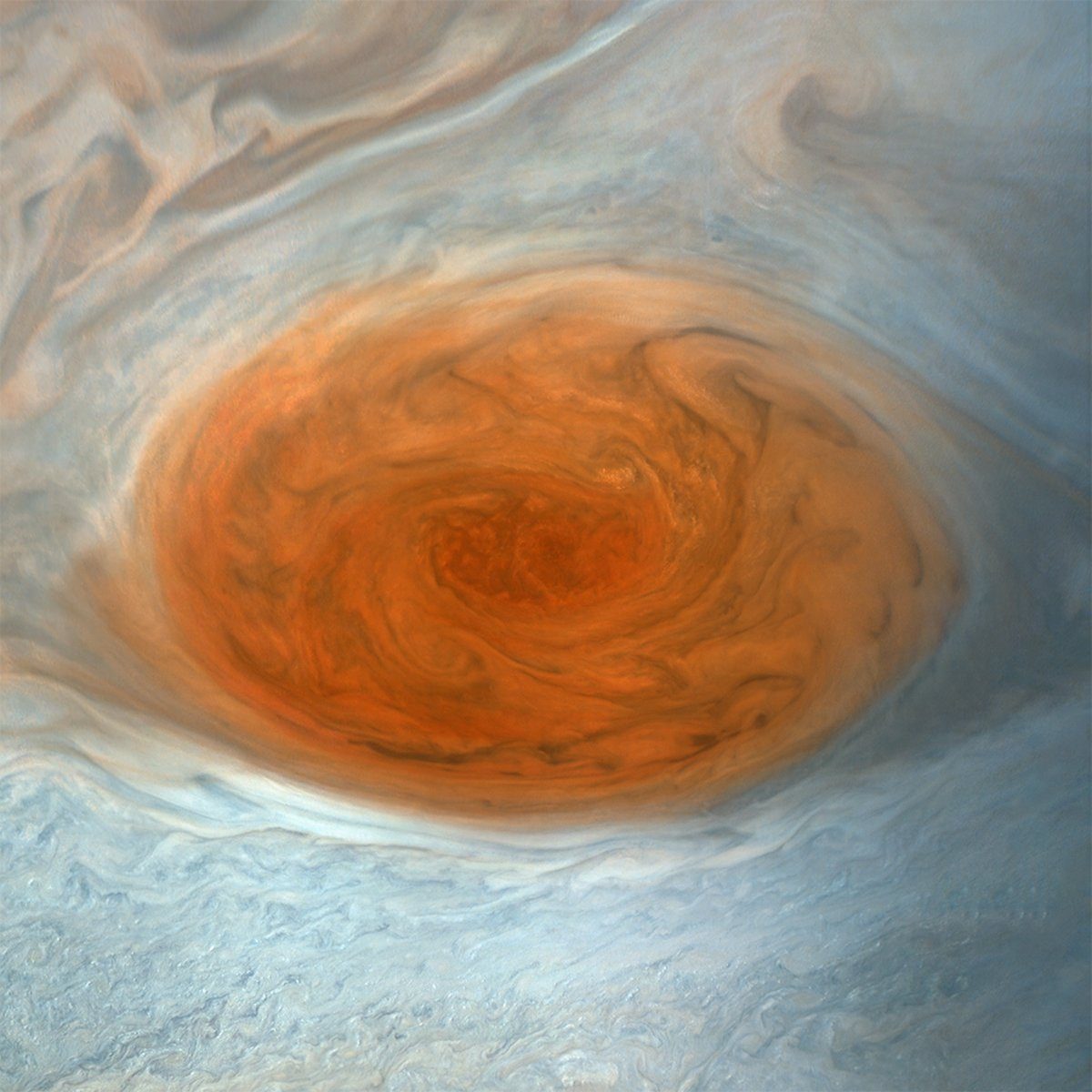 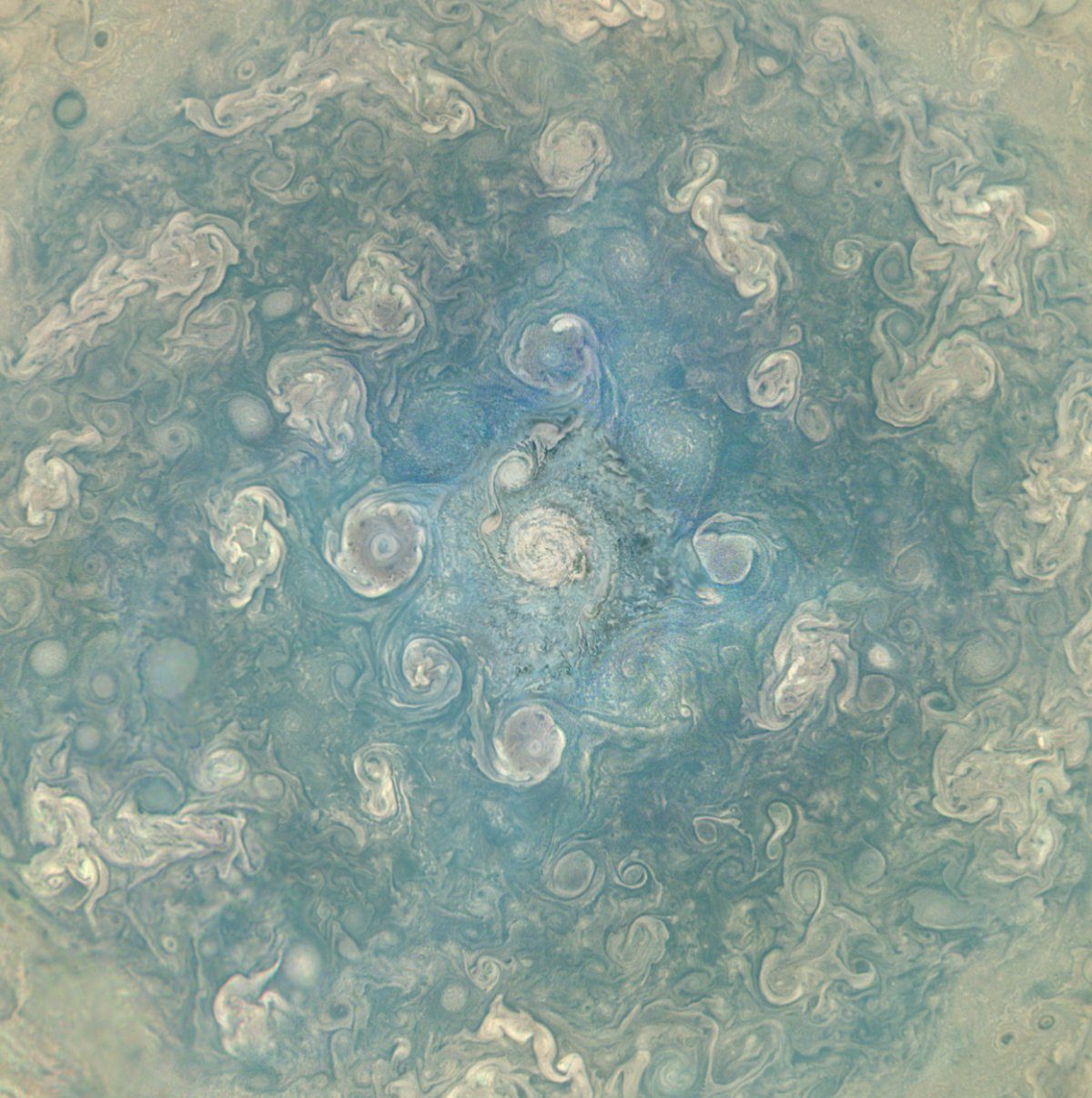 Juno’s primary mission is slated to end after its 14th perijove, on July 16, 2018. However, NASA may extend the mission by two or three years, pending a review. 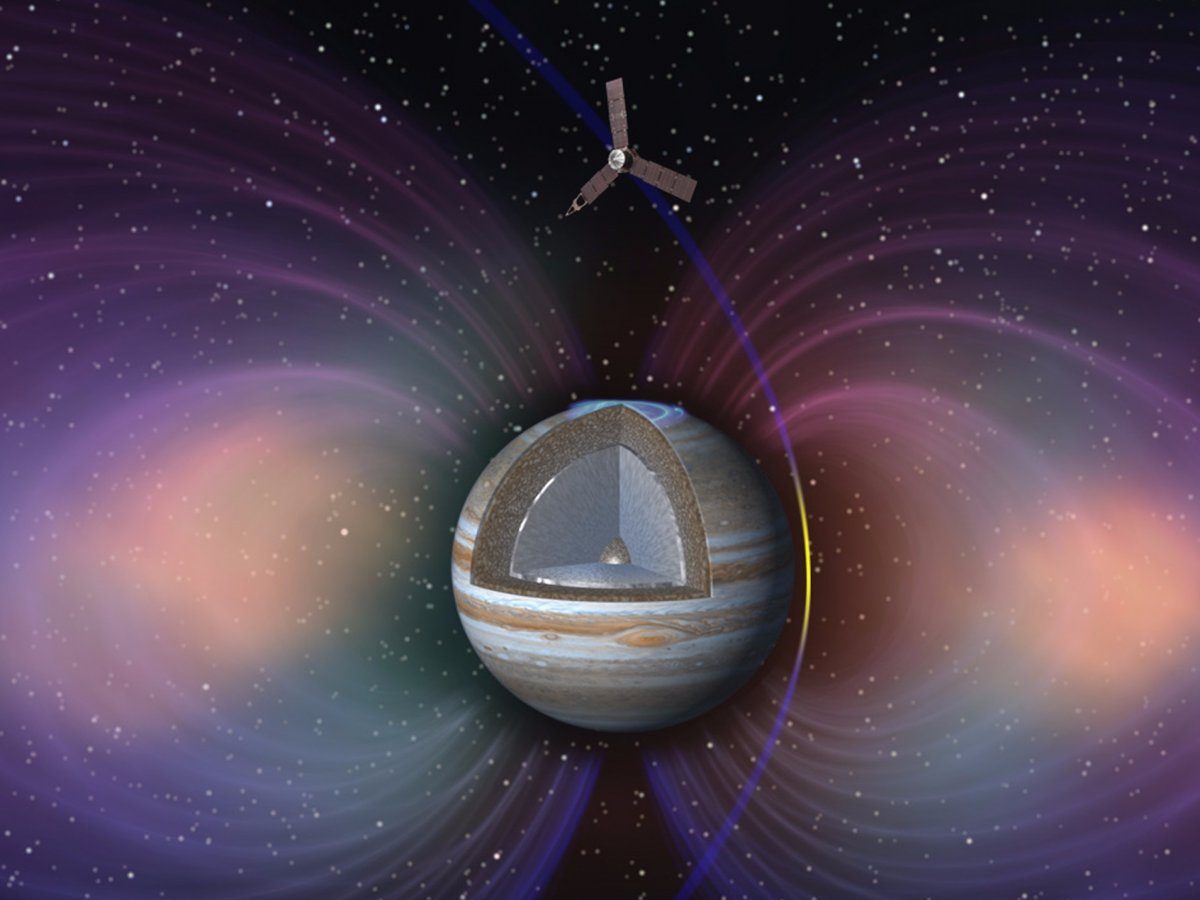 A representative for the Juno mission at NASA did not respond to Business Insider’s questions about the plan for the probe after its last scheduled perijove.

However, NASA will ultimately destroy Juno by plunging into the clouds of Jupiter. The reason? The space agency doesn’t want the probe to crash into the planet’s icy moon Europa. 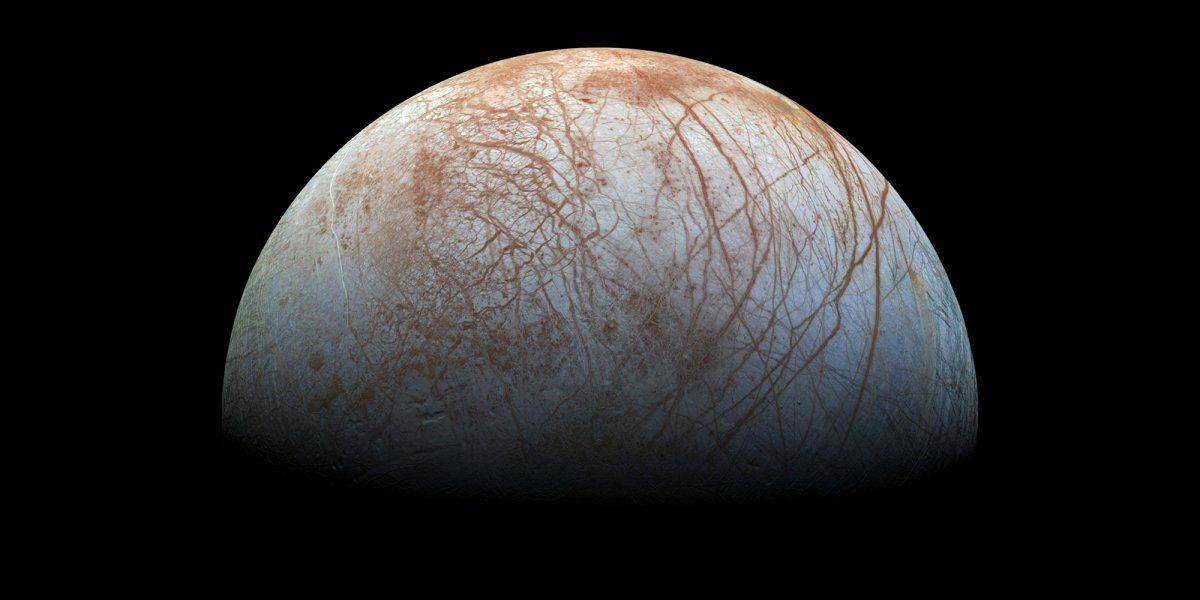 Europa, and another icy moon called Ganymede, likely have oceans of liquid water — and possibly extraterrestrial life — beneath their surfaces. 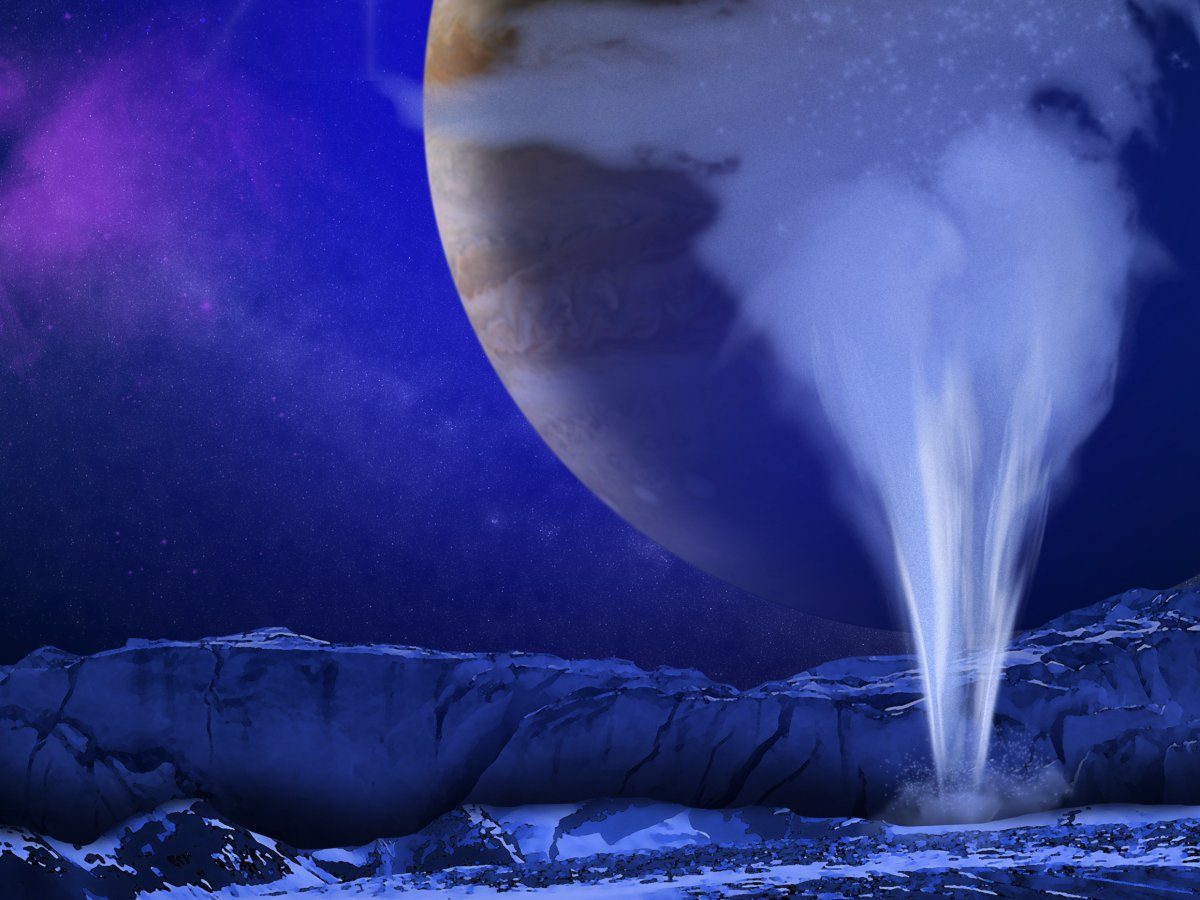 NASA doesn’t want to contaminate those oceans with bacteria from Earth that’s stuck to Juno. In the future, though, it could send a super-sterile mission beneath the ice to search for aliens. 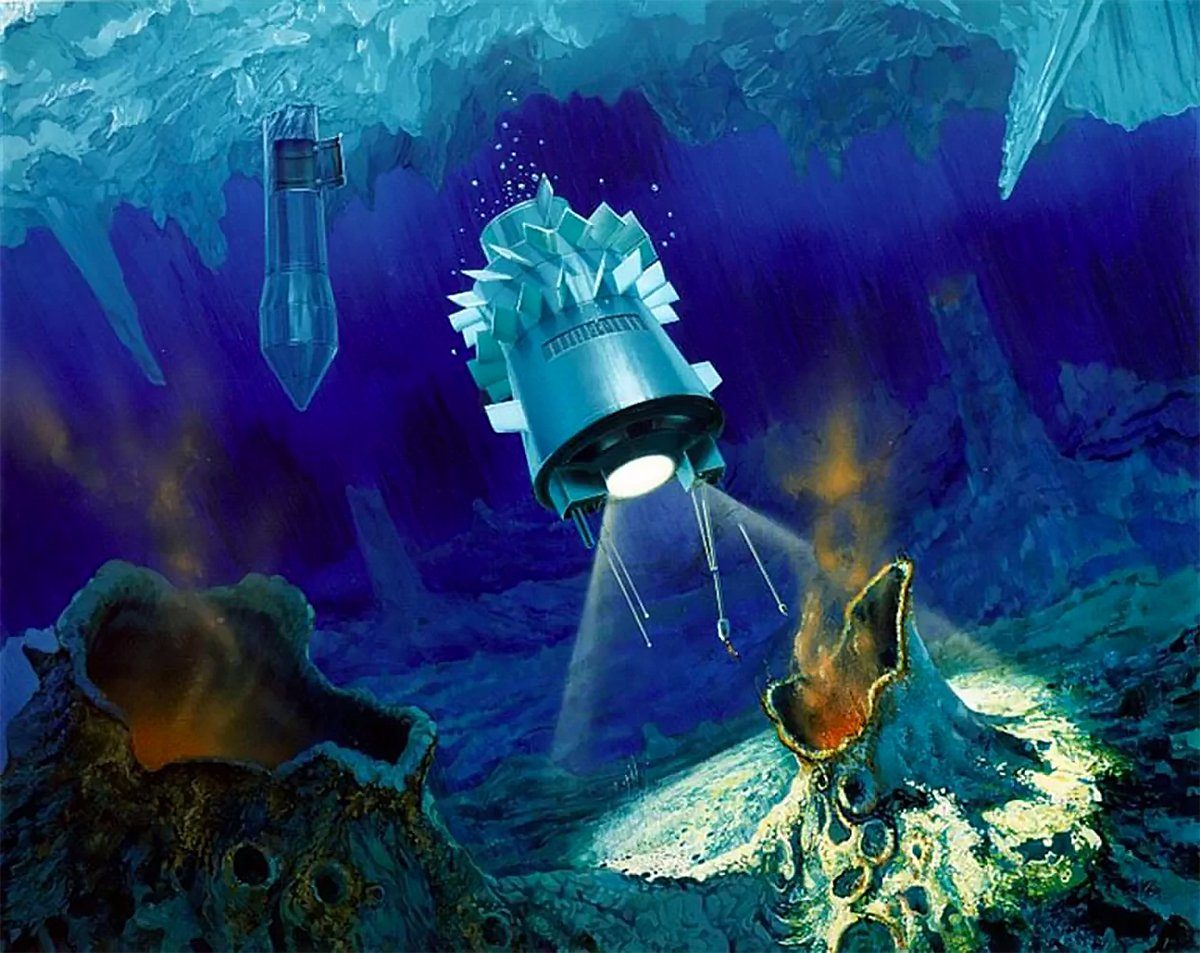 By: Taylor Rogers via yahoo.com In the six days before President Trump announced his decision to withdraw from the Paris Agreement on climate change, an enormous crack in an Antarctic ice shelf grew 11 miles, according to a report by British Antarctic research group Project MIDAS. The crack, which is located in Larson Shelf C,…