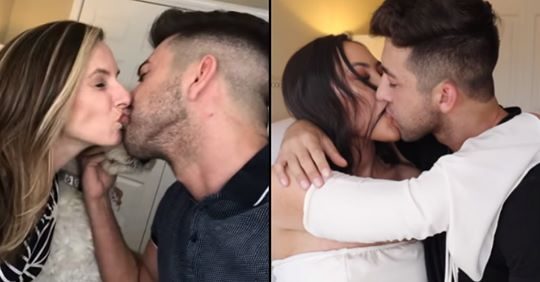 YouTube prankster Chris Monroe is back to stirring up controversy again, this time with a video where he kisses a woman that he claims is his biological mother. Kissing people in weird situations is kind of Monroe’s “thing,” it is essentially what he is known online for. In the past, he has gone viral for kissing strangers or asking to kiss people in public, but his most famous video showed him kissing a woman that he claimed was his sister.

This time he has stepped up his game and is kissing a woman he claims to be his mother, and he says that his intentions are to top his previous video.

“This video, we’re gonna top my kissing my sister prank video. I’m gonna kiss my mom. It feels so weird to say that but it’s going down,” he said in the video.

The beginning of the encounter is extremely awkward, and while Monroe says that he feels awkward about it, he really doesn’t seem like it, in fact, he seems excited to do it. Monroe told his followers that this stunt had to be rushed because his mother is leaving the country.

“Only thing is, I was planning to shoot this video later this week it turned out my mom has an emergency, she’s gotta leave the country. I couldn’t get my normal camera charged in time. This is what I usually shoot with, really nice quality,” Monroe said.

Oddly enough, the unsuspecting mother was not prepared for the stunt or warned about it in advance. Monroe sneaks up on the woman while she is at the house, and explains to his followers that she gets mad at him when he interrupts her while she is busy. When he finds her, he awkwardly asks the question.

“Mom, the video with Kaitlyn went crazy, it went viral and I just I need, I need you to do the quick game with the kiss for me,” he said.

Just like the sister, the mother objected, at first.

“NO CHRISTOPHER I DON’T WANNA DO THAT!” she shouted

Monroe pleaded with her and said, “It’ll go so viral.”

He makes a strange offer to play a game of rock, paper, scissors to decide

Then he finally convinced her and they played a game of ‘rock, paper, scissors’ to seal the deal.

His mother wins the first game of rock, paper, scissors, but Monroe was not pleased with the outcome, and begged for a second chance, and won on the second try. Sure enough, they both went through with the kiss, but it was not nearly as intense as the kiss with his sister in the previous video.

Just like the previous video, many people are unsure if this was real, considering that the name of the channel is “PrankInvasion” and most of their videos are staged. There is actually no proof that the two are related, and we only have their word to go by.

Earlier this year, it was reported by The Daily Mail that YouTube would be banning pranks that they deemed to be dangerous.

“YouTube has banned people from posting videos of dangerous pranks, following a series of potentially fatal challenges uploaded to their site. The most recent of these challenges involved performing tasks like driving or running blindfolded – inspired by the Netflix film Bird Box. From now on, the site said it would not allow videos that featured ‘pranks with a perceived danger of serious physical injury.’ YouTube has banned the depiction of such behavior completely, citing similar memes such as the Tide pod challenge and the fire challenge. The Tide pod challenge refers to a dare game involving the consumption of Tide PODS laundry detergent capsules. The fire challenge is the application of flammable liquids to one’s body and then setting the liquids alight,” The Daily Mail reported

Monroe has some very strange and disturbing pranks, that seem to be promoting incest. Many viewers also expressed discomfort with how he seemed to be forceful with these women and did not take no for an answer.