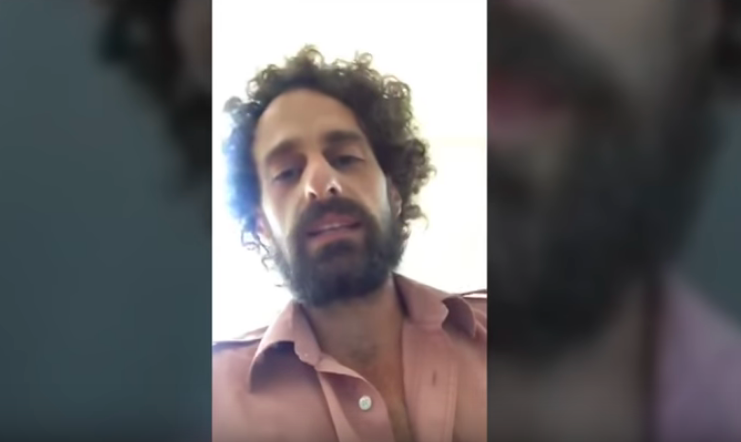 When it comes to pedophilia in Hollywood, it’s not a secret anymore. Multiple famous child actors like Elijah Wood have spoken up about this problem that plagues the industry. Corey Feldman, one of the biggest childhood actors of all time, said that pedophilia is “the biggest problem in Hollywood.” This is an issue that is tied to a great deal of power, and it seems some very powerful people are involved and that’s why the issue continues to occur. Smallville actress Allison Mack, for example, was recently arrested for her involvement in a “sex cult,”  a few months after these revelations, billionaire Clare Bronfman was indicted on racketeering charges. These charges were connected to her role as “Operations Director” for NXIVM (the sex cult that Mack was involved in and arrested for). Clare Bronfman is the daughter of Charles Bronfman, a Canadian/American businessman and philanthropist.

All of these people are connected to enormous amounts of power and wealth.

Then we have the case of sex offender Jeffrey Epstein, who has very close ties to global elitists, actors, actresses, politicians and the royal family. In more recent news, U.S. Attorney Byung “B.J.” Pak of the Northern District of Georgia asked a federal judge for a 60-day period to consult with Epstein’s victims, followed by a lengthy briefing schedule that, according to lawyers for two of the victims, could delay justice for months if not longer. These victims all mention high profile people, ones that Epstein has been seen publicly with on many occasions, like Prince Andrew. You can read our last article on him, here.  In this article, you can see a picture with one of Epstein’s accusers with Prince Andrew, as well as one with Andrew and Epstein.

Steve Pieczenik is a former high ranking United States Department of State official and a Harvard trained psychiatrist, he had this to say about the Clintons and Epstein’s plane, known as the “The Lolita Express.”

“We know that both of them have been a major part and participant of what’s called The Lolita Express, which is a plane owned by Mr. Jeff Epstein, a wealthy multi-millionaire who flies down to the Bahamas and allows Bill Clinton and Hillary to engage in sex with minors, that is called Pedophilia.” (source)

The point is, all of this stuff is well known, and not long ago, along came Isaac Kappy. Kappy has been in Hollywood circles, not as a huge star but he’s been there. He was in Thor and Terminator: Salvation, among other hit films and did a lot of writing. Approximately a year ago, he began speaking up about Hollywood sex cults and pedophilia, and he named a lot of names like Steven Spielberg, Tom Hanks, Seth Green and many many more.  These videos are all over Youtube. At the same time he began speaking out, many mainstream outlets all of sudden, like TMZ, were publishing weird information about him, like the idea that he was supposedly involved in abusing and choking Paris Jackson, a former good friend of his, for example. It was weird to say the least, especially given the fact that it happened when he began to share what he was sharing. Again, you can find many of his videos about that all over Youtube.

The latest news on Kappy is quite sad, as it appears he has passed away. It’s being reported that he recently jumped off a bridge in Arizona and committed suicide. Apparently, several witnesses were around and tried to stop him from doing so.

Kappy is not the only one who has been vocal about these issues, apart from the examples above, there are people like the example below as well.

Below is a tweet from Sarah Ruth Ashcraft, a supposed MK Ultra child sex slave victim,

Obviously, this type of rhetoric has been labeled false and mainstream circles are using their platforms to ridicule and make jokes of it, as they still do today. Whether the claims of Kappy specifically are real or not, it’s important to acknowledge the fact that high-level child trafficking amongst powerful people is a serious reality.

With all of the revelations that have come out lately, especially within Hollywood, someone like Kappy garnered a lot of attention and a lot of credibility.

His last Instagram past was one of self-reflection, one where he felt ‘bad’ for calling out the darkness of others instead of healing the darkness that lives within himself. He was very critical of himself and explained how he has been a ‘bad guy.’ His social media accounts were halted not long after he began speaking up and naming names. 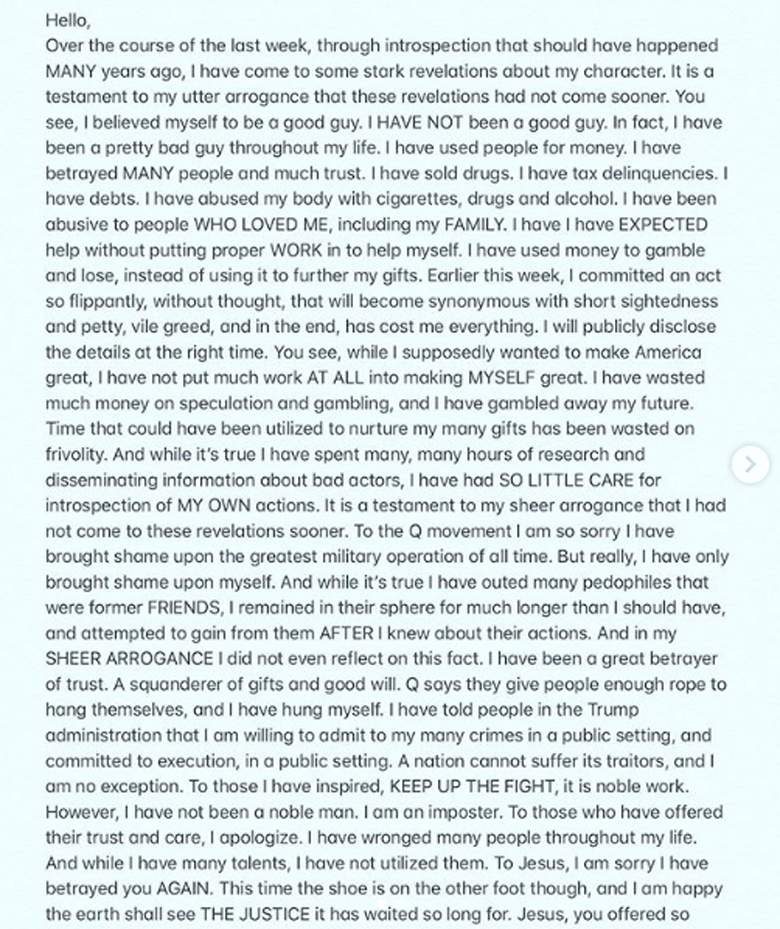 It’s unfortunate what happened. I personally believed based on everything I have looked at that this man was speaking the truth, that he had a lot of inside information and he did know a lot of people that were involved in this type of thing. It’s because I’ve come across information, for example, that’s come from people like retired Detective Jim ‘Jimmy Boots’ Rothstein, who was a member of the New York City Police Department, and various ‘out of state’ agencies for over a decade where he was assigned to investigate sex trafficking.  His job brought him to travel the world investigating how these rings operate. He shared what he saw over his career as an investigator into human trafficking. He estimates 35-40% of Politicians are involved in the coverup. You can read more about that here.

Ex Nebraska policewoman, Kathryn Bolkovac, who served as a UN peacekeeper and worked under DynCorp, a military contractor, where she learned about elite level sex trafficking involving the UN, the State Department & Military has also revealed some disturbing realities.  The latest example to come out of the UN would be from the ex-chief advisor for the United Nation’s Child Labour Program, Peter Dalglish, who was recently arrested for pedophilia. In early 2017 the United Nations Secretary-General admitted to 145 incidents involving 311 victims in 2016 alone, mainly in peace operations. We covered this earlier this year.

There are literally so many examples.

There is also no doubt in my mind that this man, Kappy, was possibly suicidal, but who really knows the circumstances of his death. It’s not hard to find his videos and testimonies online if you’re looking at them. I believe he was a very brave person for saying what he was saying, especially coming from the circles he was coming from and being close to a number of celebrities and Hollywood figures.

But again, the reality of high-level child trafficking is not up for debate. The International Tribunal For Natural Justice is a great place to start if you’re looking for more information from some very credible sources.

One of the reasons that first-hand information about the true nature of elite Satanic ritual abuse and pedophilia is so rare is that child sex slaves are destined to be killed off–brought to the chopping block, in the case of Anneke Lucas and the elite Belgian pedophile ring she was ensnared in–once they were no longer useful to the network and their continued existence posed a threat. What makes it all the more remarkable that Anneke Lucas was removed from the butcher’s block mere moments before she would be killed was the fact that those in the network who knew her as intelligent, defiant, and powerful–even at the age of eleven–must have had some concerns that at some point, she may recover enough from her trauma to expose the network and its heinous Satanic practices.

The video clip below from CE’s exclusive 4-part interview  (CETV, A platform we created to combat the censorship we are experiencing and allow us to continue with our work) with Anneke launched on January 17 describes a portion of the training she was forced to go through.

Richard Enos conducted the interview, a writer here at Collective Evolution who has published a number of articles on the topic. He received a lovely note from Anneke before the interview:

I’m writing to thank you for your articles about the nature of power, pedophilia and Satanic practices. As a survivor, it is refreshing to find someone writing about these issues with such clarity, with both awareness of the problem and the dawning awakening of humanity to this darkness.

Never before has so much ‘wrongdoing’ in various areas been exposed. It continues to happen here on planet Earth, and despite the fact that mainstream media continues to ridicule and remain silent on topics as such that are an unfortunate reality, truth continues to come out. Our world is shifting, the way people perceive our world is shifting, and ‘dark’ realities are simply part of the human experience that long went unknown. Once we start knowing, and become aware, it’s clearly something that the majority of humans do not resonate with and thus that intention alone helps shift the reality of this experience. Truth is being exposed, and the more it is, the more difficult it becomes for such experiences to continue. It’s simply a micro reflection, one of many, of several realities on Earth that do not resonate with the human soul. We are living in a time of great change, and one thing is for certain, ignorance is not the answer, but rather shining light into the ‘darkness’ is.

This article originally appeared on CE.

In Kent, United Kingdom, two boys recently said to police that they were aggressively chased by a man in a clown costume, who was shouting “run or die,” while armed with a knife. It’s an odd reaction to such news, but some articles are subtly promoting hysteria about some resurgence of people threatening violence who…

Last weekend, in New South Wales, Australia, a man was captured on video assaulting a group of 12 year old boys at Goonellabah skate park in Lismore. It turns out that the man was defending his son, who was also 12, from a group of bullies. Prior to the incident, the bullies were so mean…

This week, doubt has been cast on the allegations of abuse that were made against Michael Jackson in the HBO documentary Leaving Neverland, after Jackson’s biographer found discrepancies in the official timeline. Author Mike Smallcombe, who wrote the Michael Jackson biography “Making Michael” has investigated the claims made in the film and has found that…