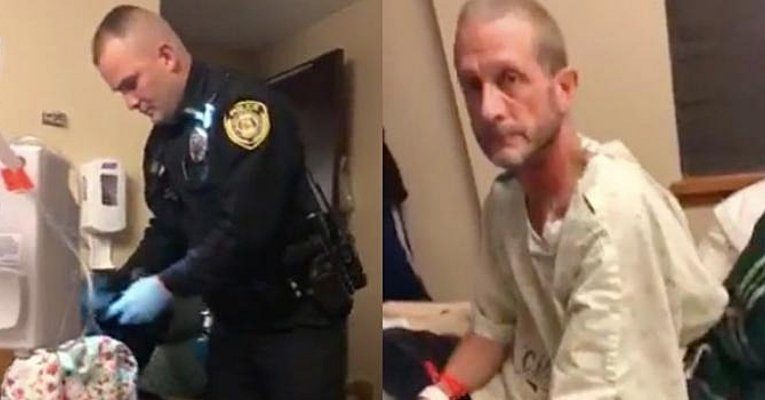 Nolan Sousley, a terminal cancer patient, recently had his hospital room raided by police after staff members at the hospital reported that he had cannabis in his room. The incident happened earlier this year at Citizens Memorial Healthcare in Missouri.

A staff member told the police that he could smell marijuana in the room, but Sousley and his family said that this would be impossible, since he doesn’t smoke the dried plant, but instead ingests the oil of the plant in a capsule.

“There is no way they could smell it, doc, because I don’t smoke it, I don’t ever use a ground-up plant. It’s an oil I use in a capsule, there’s no smoking it. I take it like a pill,” Sousley can be heard saying in the video.

The police searched through all of his personal belongings and were not able to find any cannabis or cannabis oil.

Sousley’s wife Amber Kidwell says that people from all over the country have reached out to express their sympathy and share their support for the family.

“We’ve had an outpouring of people reaching out for support and love, and through this we’ve had a lot of people reach out — sorry, this is gonna make me emotional — a lot of people have reached out who have cancer also, and hearing their stories has been really important for us. When you get an outreach and outpouring of people telling you their story also…. for us, this is a terminally ill patient who should have the right to choose (their own treatment).” Kidwell said.

“Terminally ill patients should have the right to choose their treatment plan above the spectrum of what the government deems appropriate to increase their quality of life,” She added.

Bolivar Police Chief Mark Webb told the News-Leader that the search was executed without incident and everyone complied with the orders of the officers.

“Some of their security officers had detected or smelled marijuana coming from a patient room. Officers arrived to basically check the validity of that, and it was late and they were filming,” Webb said in a statement.

Webb said that the department has gotten negative feedback from all over the world, and that some of the officers have been deeply hurt.

“I was a cop a long time before we had social media. I’ve got my staff in tears. People are calling and actually making threats against police,” Webb said.

The Bolivar Police Department was getting so much negative feedback that they were forced to take down their Facebook page shortly after the story went public.

Webb said that the page “was getting too overloaded and we quit taking responses. We’re looking for other ways to give their information.”

Citizens Memorial Healthcare issued the following statement after the incident, saying that:

“Unfortunately, due to HIPAA (federal privacy law), we are unable to comment about any specific patient, their treatment or what was done or not done in any particular situation. Generally speaking, it is against the Hospital’s policy to smoke or vape on the Hospital’s campus. It is also our policy to call appropriate law enforcement any time Hospital personnel see or reasonably suspect illegal drug use in patient rooms or otherwise on campus.”

A 2015 study, published in the journal, ‘Scientific Reports,’ suggests that smoking cannabis is roughly 114 times safer than drinking alcohol. Ironically, out of all the drugs that were researched in the study, alcohol was actually the most dangerous, and it was the only legal drug on the list.

A study published last year by researchers at the University of Michigan has shown that cannabis use among teens and college students is increasing while alcohol and tobacco use is declining. In fact, for the first time ever, the rate of daily cannabis use has now surpassed the rate of daily cigarette use. This is a great discovery considering the fact that cigarettes and alcohol kill tens of thousands a year while marijuana kills no one.

By: Arjun Walia via collective-evolution.com Below is the story of a woman named Kendall, who tells a story of private planes, black tie parties, elite sporting events, and more. She claims she was sold by her parents at birth to a powerful international sex trafficker, and says she was beaten, tortured, and forced to do unimaginable…

High-profile hacker Gary McKinnon claims to have some interesting information about the US Navy’s intergalactic adventures… Gary McKinnon is a British lifelong UFO fanatic and computer expert, whose 2002 arrest for hacking into the US Navy and NASA systems was labeled the ‘biggest military computer hack of all time.’ McKinnon claimed the security was so lax, he…