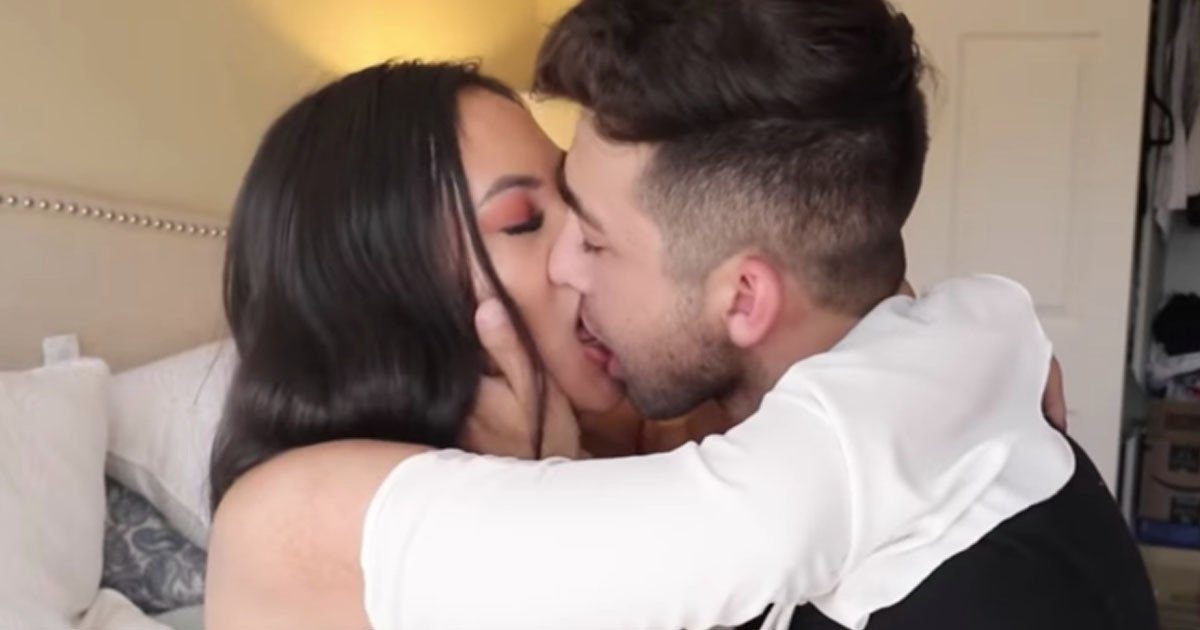 Last month, YouTuber Chris Monroe of the channel ‘PrankInvasion’ made a video showing him kissing a woman named Kaitlyn O’Connor, who he claims is his half-sister. The video quickly went viral as curiosity seekers came to check it out, and it has already gathered over 1.5 million views.

The viral stunt began on March 20, when Chris shared a photo to his Instagram page showing him kissing Kaitlyn, with a caption saying that the pair would kiss on video if the post received over 30,000 likes.

The caption read, “Had such an amazing time with one of my little sister’s on St. Patrick’s Day! You’re my half-sister but it honestly doesn’t feel like it — so thankful we’ve stayed so close all our lives. Go follow her and show her love! If this photo gets 30,000 likes…me and my sis will kiss on YouTube!”

In that same day, the post hit its target of 30,000 likes, and the pair agreed to go through with the kiss.

At the beginning of the video, Chris says that he owed his subscribers something big since his page was down for three months after being hacked. Kaitlyn seemed uncomfortable with the situation and expressed that she really didn’t want to do it, however, she eventually agreed to do the kiss to show the viewers what they want.

Next, Chris goes in for the kiss after saying ‘this feels awkward.’

But Kaitlyn pulls away, obviously not wanting to go through with the challenge. Chris then tries to push her further, not seeming to respect her consent.

Chris tells her that it ‘one-time life experience, we won’t forget this, it will like bond us.’

For some reason, Kaitlyn seems convinced by his pushy attitude, but just as they are about to kiss, a phone rings in the background.

Chris seemed frustrated, saying that ‘it is like the Earth is trying to make it not happen.’

After the phone call, the pair begin to kiss passionately, which is a disturbing sight.

After the kiss, Kaitlyn says that she “never wants to do that again.”

Many people are unsure if this was real, considering that the name of the channel is “PrankInvasion” and most of their videos are staged. There is actually no proof that the two are related, and we only have their word to go by. When The Tab attempted to contact Chris personally, he reportedly cut off communication with them after they asked him for legal proof of his relation to Kaitlyn.

“In the time-honored tradition of journalism, we contacted Chris to hold him to account. We want to speak truth to power, and that includes trying to get hold of some random YouTuber’s family tree. PrankInvasion Chris insists she is his half-sister. But when we asked him for a single bit of proof – photos, a family tree, literally one of the many things you’d have to prove your connection to your family – Chris went quiet,” The Tab reported.

Regardless of the video’s authenticity, it is an extremely gross idea to promote. Many of the people commented on the video saying that if it is true, what they were doing could be considered illegal in most US states, under incest laws.

Others suggested that this was just his cousin and not actually his sister, although that would still be gross. The most upsetting thing about the video for many viewers, was the fact the Kaitlyn was noticeably uncomfortable and was obviously pushed into the situation. Even if what happened was entirely staged, many viewers found it disturbing that the violation of a woman’s consent could be displayed so casually.

Earlier this year, it was reported by The Daily Mail that YouTube would be banning pranks that they deemed to be dangerous.

“YouTube has banned people from posting videos of dangerous pranks, following a series of potentially fatal challenges uploaded to their site. The most recent of these challenges involved performing tasks like driving or running blindfolded – inspired by the Netflix film Bird Box. From now on, the site said it would not allow videos that featured ‘pranks with a perceived danger of serious physical injury.’ YouTube has banned the depiction of such behavior completely, citing similar memes such as the Tide pod challenge and the fire challenge. The Tide pod challenge refers to a dare game involving the consumption of Tide PODS laundry detergent capsules. The fire challenge is the application of flammable liquids to one’s body and then setting the liquids alight,” The Daily Mail reported.