ABC News has been caught staging a fake “crime scene” for reporter Linsey Davis to report from in a segment broadcast on Good Morning America.

Viewers were presented with the sight of Davis standing in front of yellow police tape with the words “SHERIFF’S LINE DO NOT CROSS” and ABC News, reporting from the site for hours, claimed Davis was in the middle of an active crime scene.

But she wasn’t. The ABC News report had more in common with a Hollywood production than a breaking news report.

Linsey Davis was actually standing in a field in Woodruffe, South Carolina – not at the crime scene she was claiming to be reporting from. Sources with knowledge of the matter say the sheriff’s tape was placed there by the ABC News crew for the purpose of its inclusion in the live shot. 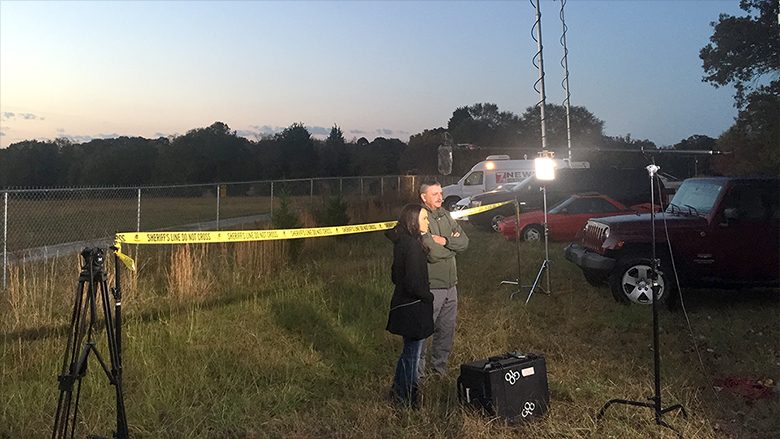 A photo leaked by an anonymous source shows the sheriff’s tape running no more than 30 yards – and tied at both ends to ABC News camera stands.

Busted – and ABC know it. “This action is completely unacceptable and fails to meet the standards of ABC News,” said Julie Townsend, the vice president of communications at ABC News. “As soon as it was brought to our attention, we decided to take the producer out of the field, and we’re investigating further.”

But ABC News’ recent behavior gets even worse. While they are spending money and resources on faking crime scenes to set their viewers’ pulses racing, they have also been exposed misleading their audience about real news.

After ignoring the bombshell news that the FBI has been conducting an active investigation into the Clinton Foundation for more than a year, Good Morning America on Friday finally realized they couldn’t continue ignoring the story without losing credibility.

So they covered the story. But only for 40 seconds and only to dismiss it as “inaccurate and “unsubstantiated.” CBS This Morning’s Major Garrett followed up by chiding “unconfirmed speculation.”

How can anybody trust these exposed liars anymore? Deceit and manipulation are fundamental to mainstream media operations these days.

Close-Up Of Marijuana More than a half ton of marijuana disappeared from a police warehouse without a trace, and upon investigation, the police who were responsible for the warehouse claimed that the missing contraband was eaten by mice. The incident occurred in the Argentinian town of Pilar, which is 60km outside the capital city of…