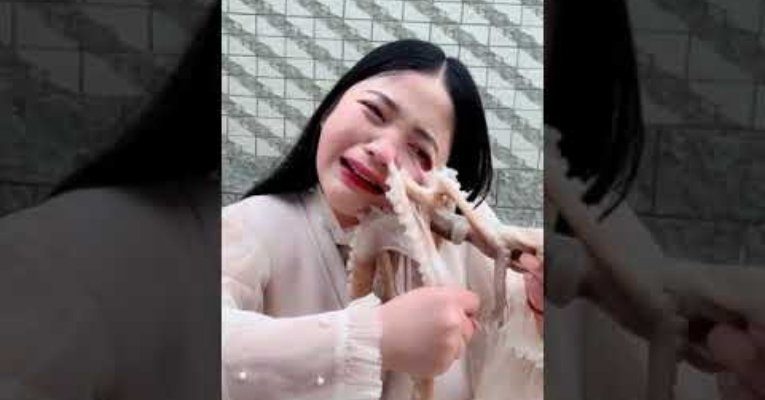 A livestreamer known as “Seaside Girl Little Seven” wanted to get famous from eating a live octopus on video, but the stunt took a horrible turn when the creatures tenticles latched on to her face. / Photo Credit: Kuaishou screenshot

It turns out that obnoxious online influencers with ridiculous and dangerous challenges are a global phenomenon, that is not limited to western countries. This week, it was reported that a Chinese live streaming host attempted to eat an octopus while it was alive. However, the woman ended up being attacked by the eight-armed sea creature, and nearly lost her face! The video was posted to the Chinese video platform Kuaishou, which is similar to Vine or Tik Tok, but allows for slightly longer videos.

As the woman brought the octopus near her face, it latched onto her with its tentacles and began to suck her face off.
The woman then screamed in paint and tried her best to detach the octopus from her face, but the creature just seemed to tighten its grip as it became more frightened.

The video is just under a minute long and was filmed by a well known blogger known as “Seaside Girl Little Seven.”

At first, the woman did not realize that something was wrong, even after the creature first latched onto her face. Once the woman started to have some difficulty with the creature, she cried out, “I’ll eat it in the next video!” However, she then quickly realized that she was beginning to bleed, and that is when she panicked and began to scream.

“look how hard it’s sucking” the woman shouted, as she desperately attempted to remove the tentacles from her face. She then screamed, telling her audience that she was in immense pain.

“I can’t remove it!‘ she shouts as she pulls harder on the tentacles, nearly stretching her face off the bone. It is a truly gruesome sight to watch.

Eventually, the creature let go of her face, and the woman began to regain her confidence, telling her viewers that, “I’ll eat it in the next video!”

When she got a look at her face, she realized that she was wounded and told her viewers “My face is disfigured.”

This strange blogger is known for eating weird seafood, and has eaten different types of octopuses for her channel on other occasions. Even though she has already gained international attention, she has only been video blogging on the site for a few weeks.

Sadly, her online viewers were not cheering her on, but were laughing at her foolishness.

A live streamer known as “Seaside Girl Little Seven” wanted to get famous from eating a live octopus on video, but the stunt took a horrible turn when the creature’s tentacles latched on to her face. / Photo Credit: Kuaishou screenshot

On Weibo, a social media platform in China that is similar to Twitter, one user named ‘liying Bao Yuyin’ said, “She deserves it. She tried to eat the octopus and the octopus tried to eat her too.”

Another user ‘Di Ke Tou’ added the comment ‘An eye for an eye, a tooth for a tooth.’

Believe it or not, octopuses are some of the smartest creatures on the planet, and they know when they are in danger. The octopus in this video likely knew that it was about to be eaten by a predator, so it used its tentacles to protect itself, just as it would in the wild.

A mature giant Pacific octopus reportedly has roughly 280 suckers on each tentacle, and each sucker contains thousands of chemical receptors.

In a previous case, a fisherman by the name of Chance Miller, who offers guided tours of the Chiswell Islands in Alaska, captured amazing footage of an octopus escaping through a small hole on his boat.

In the video, you can hear Miller telling the passengers on his boat that the octopus will feel its way to the water. Since octopuses have no bones, they are able to easily squeeze in and out of tight spaces.

Sensing that it may be in danger and wanting to get back to the water, the octopus pushed its body through a small hole in the side of the boat.

Octopuses are amazing creatures. In fact, they are so strange that it has even led some scientists and researchers to speculate that they are actually aliens, although the theory is highly controversial and disputed by many.

Ants are incredibly small, they often fall victim to larger insects and birds, and they’re pretty much always working. These bugs never get to go on vacation, and that’s pretty sad. But perhaps the most unfortunate facet of an ant’s life is a phenomenon known as “The Circle of Death.” Sounds foreboding, right? Well, what…

A common trend in recent human history is this: we think something isn’t harmful, but find out it really is years after its introduction into the global marketplace. Cigarettes are the most obvious example, but the use of cell phones may very well become just as vilified. We now live in an era where children born today…