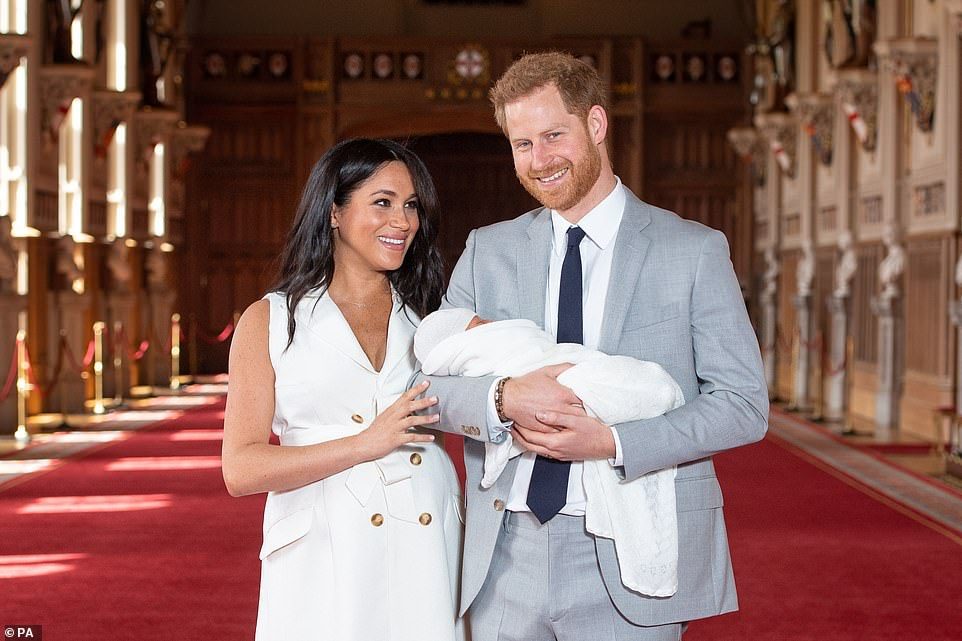 A smiling Meghan cannot keep her eyes off her husband and new baby as the couple unveil their new ‘bundle of joy’ today / Photo Credit: The Daily Mail

The first pictures have been revealed of the newest addition to the royal family. This week, The Duke and Duchess of Sussex have shown their healthy baby boy to the world for the first time ever. The photos were taken with Prince Harry and Meghan in the grounds of Windsor Castle with their new child. 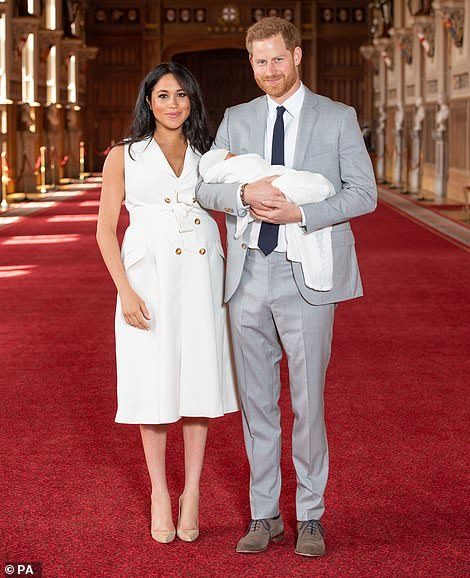 The world has been given its first ever glimpse of the Duke and Duchess of Sussex’s newborn son / Photo Credit: The Daily Mail

Harry and Meghan have been making waves in the royal family since their wedding because they do not follow the royal traditions exactly as they are required to. The birth of their first son was no different, as the couple opted to employ their own photographer, ex-soldier Chris Allerton, instead of the in house photographer that typically does the job. The photos were then posted to an Instagram account named ‘SussexRoyal.’

The caption for the photos read, “Today The Duke and Duchess of Sussex are delighted to share their first public moment as a family. They are so incredibly grateful for the warm wishes and support they’ve received from everyone around the world, since welcoming their son two days ago.”

A smiling Meghan cannot keep her eyes off her husband and new baby as the couple unveil their new ‘bundle of joy’ today / Photo Credit: The Daily Mail

It seems that even in the modern age the royal family is still quite popular, as the post quickly gathered over one million likes and tens of thousands of comments.

The young infant was just two years old at the time that the photos were taken. The child has yet to be named publicly.

Speaking to family, friends and media inside St George’s Hall at Windsor Castle Meghan said that she feels amazing. 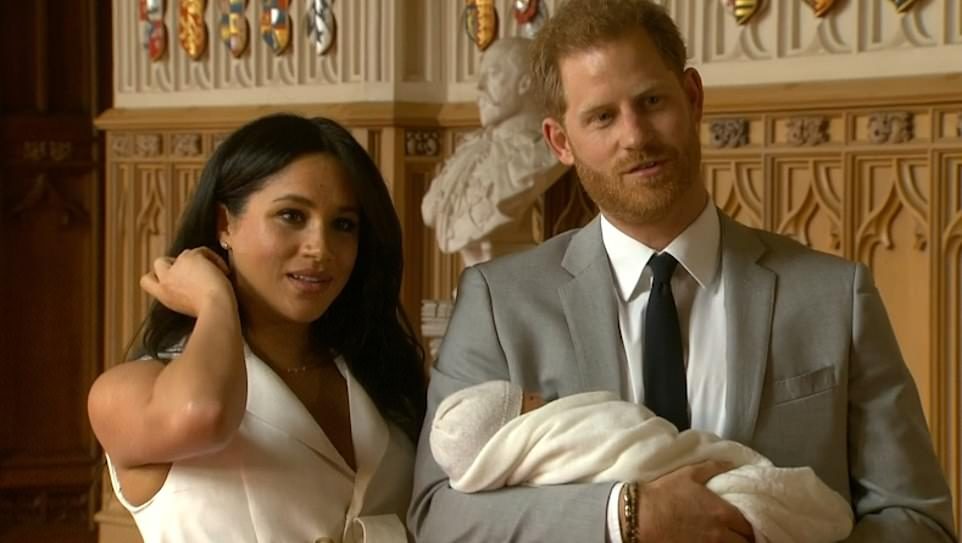 Body language expert Judi James has said Meghan displayed some level of anxiety, but her loving looks at her son and her husband showed how happy she is to be a mother / Photo Credit: The Daily Mail

“It’s magic, it’s pretty amazing. He’s just been the dream so it’s been a special couple of days. I have the two best guys in the world so I’m really happy. He has the sweetest temperament, he’s really calm,” she said.

It has also been said that Meghan and Harry have broken tradition by having the father, instead of the mother, holding the baby in the photo. The couple will also not be using the traditional nanny that has been employed by the royal family for years, but instead will be using various recruitment firms to find the perfect nanny.

The queen was not even the first royal to see the baby, in fact, it is said that the Duke of Edinburgh was the first to see the child. 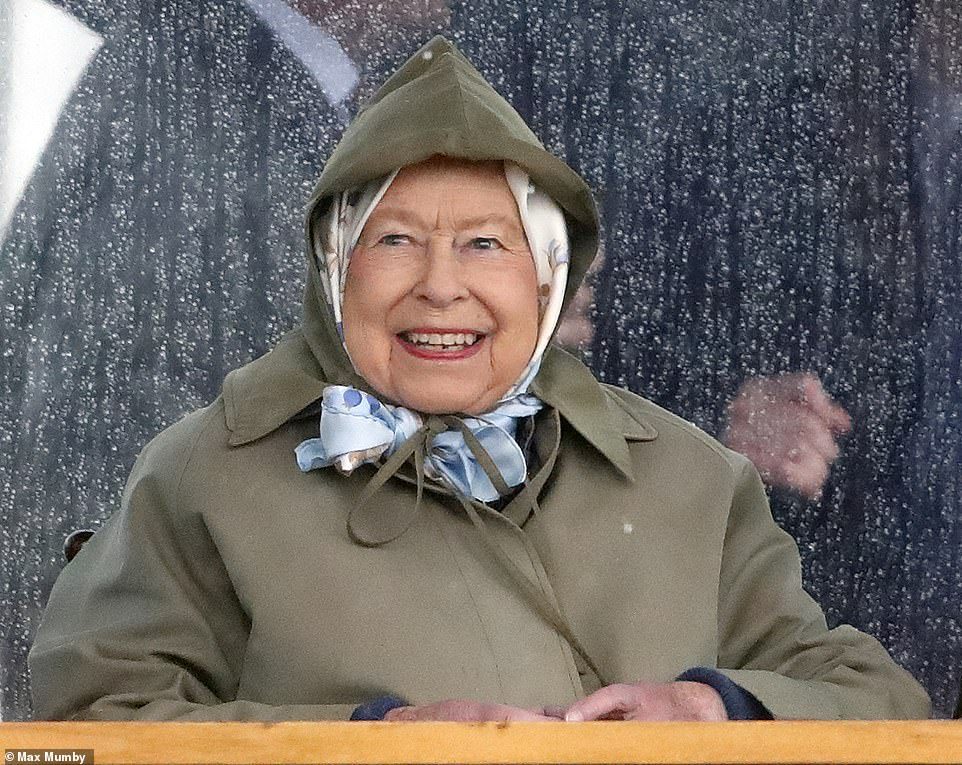 The Queen looked relaxed and excited at the Windsor Horse Show this morning ahead of meeting her new great-grandson later today Photo Credit: The Daily Mail

“We just bumped into the duke as we were walking by which was so nice. So it’ll be a nice moment to introduce the baby to more family and my mum’s with us as well,” Meghan said.

“It’s only been two and a half days, three days, but we’re just so thrilled to have our own little bundle of joy,” she added.

Harry said that it is far too soon to tell what the personality of the child will be like.

“Everyone says that babies change so much over two weeks we’re basically monitoring how the changing process happens over this next month really. But his looks are changing every single day, so who knows,” Harry said.

In recent months there has been controversy between Harry, Meghan and the rest of the royal family due to the couple’s lack of harmony with royal traditions. The feud has reportedly gotten so heated, that members of the royal family have unfollowed one another on social media. However, after the unfollowing was reported by Page Six, the royals made a statement saying that they are simply following and unfollowing accounts periodically based on themes, and this has nothing to do with the family dynamics between them.

“Each month we will honour this same concept and change the accounts we solely follow based on a different theme or cause,” they wrote. “Please go to our homepage and click ‘following’ to see each of the select accounts and find out more about their work.”

Last month, YouTuber Chris Monroe of the channel ‘PrankInvasion’ made a video showing him kissing a woman named Kaitlyn O’Connor, who he claims is his half-sister. The video quickly went viral as curiosity seekers came to check it out, and it has already gathered over 1.5 million views. The viral stunt began on March 20,…

A phenomena of recent, several people have been claiming that they have traveled back in time to the present, to warn people about what the future will be like. While one must at least consider whether or not the person could be actually telling the truth, without a doubt most people will probably not believe…