A Chinese artist has sparked outrage among his culture after posting photos online, which showed him laying naked beside the skeletal remains of his father. The artist, 33 year old Siyuan Zhuji lost his father to liver cancer when he was just three years old, and says that he does not have many memories of the man.

Siyuan said that the photo shoot was “the closest I’ve ever been to my father.”

Many horrified online commenters assumed that the young man dug up the remains of his father himself, but luckily he planned the photo shoot along with an exhumation that was already happening.

The father’s grave was reportedly showing signs of wear and tear so cemetery officials dug up his body so it could be placed into a proper grave.

However, Siyuan struck a deal with the cemetary caretaker, who helped him arrange the bones in a nearby area for the photo shoot. Unfortunately, the terms of their agreement were not made public, but a cemetery caretaker wouldn’t be expected to handle bones for this kind of purpose without being fairly compensated. 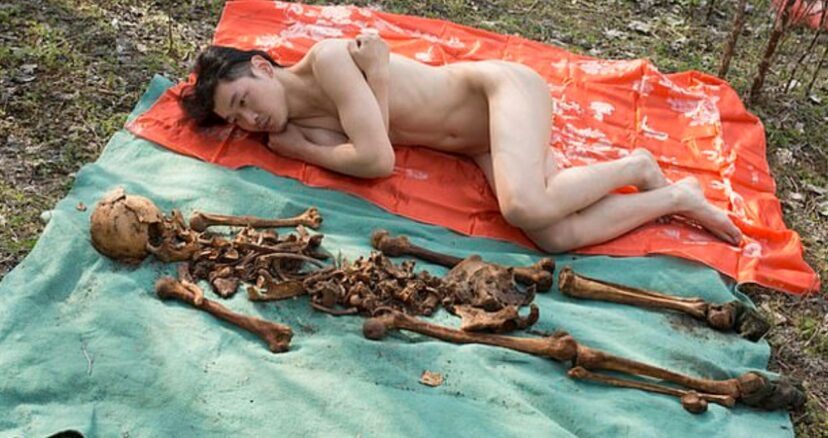 Once the bones were taken to a discreet location and laid out in the shape of a human, Siyuan stripped naked and laid down on a blanket next to the bones while his wife took pictures.

After the photo shoot, Siyuan shared the pictures to Artand, which is a Chinese art blogging platform. He also shared the images on Weibo, which is basically the Chinese version of Twitter.

The artist’s photos stirred even more controversy than they typically would because he made the post just after Tomb Sweeping Day, which is a Chinese holiday and festival that centers around paying respect to the dead. Many saw Siyuan’s actions as blasphemy or sacrilege.

Siyuan said that what he created was art and that art should have no social boundaries.

“I treated this as a real artwork, I did this for art. Real art should not be afraid of facing the public or being out in the world. I was also a little selfish, I wanted to realise a dream of mine – to take a photo with my father’s bones,” Siyuan told the South China Morning Post.

Siyuan also said that he told his mother about the photographs after he took them, and she didn’t seem to have a problem with the stunt.

“She said if the caretaker didn’t have a problem with it, then she didn’t as well, She is supportive of my work,” Siyuan explained. 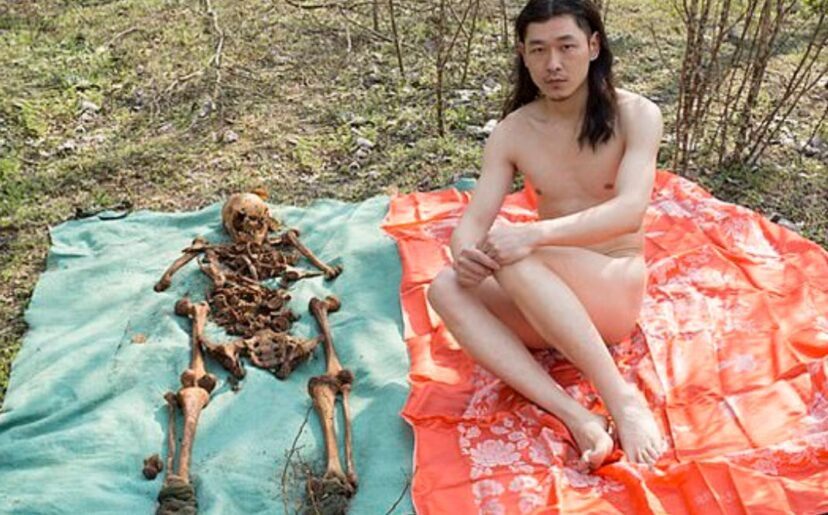 However, many people were deeply offended by Siyuan’s work of art.

One Weibo commenter warned Siyuan, “Young man, disturbing the dead, you will never have a moment of peace for the rest of your life.”

In China, Tomb Sweeping day is known as the Qingming or Ching Ming festival and is also sometimes called Chinese Memorial Day or Ancestors’ Day.

“During Qingming, Chinese families visit the tombs of their ancestors to clean the gravesites, pray to their ancestors, and make ritual offerings. Offerings would typically include traditional food dishes, and the burning of joss sticks and joss paper. The holiday recognizes the traditional reverence of one’s ancestors in Chinese culture. The Qingming Festival has been observed by the Chinese for over 2500 years. It became a public holiday in mainland China in 2008,” Wikipedia reported.

“The festival originated from the Cold Food or Hanshi Festival which remembered Jie Zitui, a nobleman of the state of Jin (modern Shanxi) during the Spring and Autumn Period. Amid the Li Ji Unrest, he followed his master Prince Chong’er in 655 bc to exile among the Di tribes and around China. The Qingming Festival commemorates the life of the departed in an elaborate set of rituals often mistranslated in the West as ancestral worship. Actually, it is a Confucian form of posthumous respect and filial piety offered to a Chinese person’s ancestors, departed relatives, or parents. Not all Chinese persons will pray directly to their ancestors in ancestral spirit but almost all will observe the Qing Ming Rituals,” the online encyclopedia also noted.

By Sherley Boursiquot Hillary Clinton might be taking the saying “move in silence” to heart. At least one pundit was speculating this week that the Democrat could run for president again — despite her electoral college loss in last November’s presidential election. Matt Latimer, a former speechwriter for George W. Bush, wrote an exclusive essay for Politico Sunday…