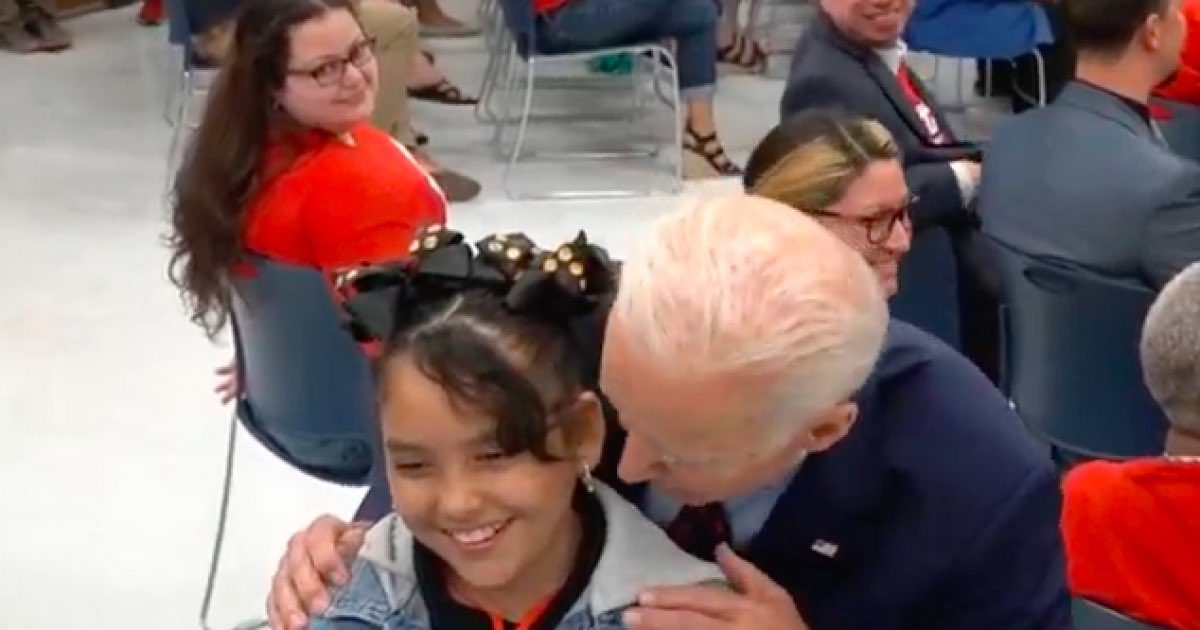 Since announcing his run for president, Joe Biden immediately skyrocketed to the frontrunner position of the Democratic party, quickly after announcing his candidacy.

Biden has received overwhelmingly positive coverage in the media, despite having recently been exposed as a total creep.

It seems that now the only thing standing in the way of Joe Biden and the nomination for the Democratic party is his inability to keep his hands off of little girls.

Even with the media keeping a close eye on him, Biden can’t seem to control himself.

This week, during an American Federation of Teachers Town Hall in Houston, Biden made an incredibly creepy remark to a 10 year old girl.

After the young girl asked Biden a question, Biden told her “I’ll bet you’re as bright as you are good-looking.”

Next Biden ushered her over to the reporters for a photo opportunity as he whispered into her ear.

Shortly after his odd remark, Biden turned to the reporters in the room and said, “By the way, as these guys will tell you, I’m not always their favorite subject, but the truth of the matter is, the reason why we are who we are is called a free press.”

Biden’s comments were immediately picked up by the media and sparked outrage among conservatives and liberals alike.

Prior to announcing his candidacy, years worth of footage showing Biden putting his hands on women inappropriately, smelling their hair, and making them feel uncomfortable circulated around the internet.

However, the media backlash for Biden’s predatory behavior never came, and all of the terrible policies of his past have been ignored.

This is an obvious sign that Biden is the favorite of the establishment, and there is a good chance that he will win the election even though he is embroiled in a massive public scandal. 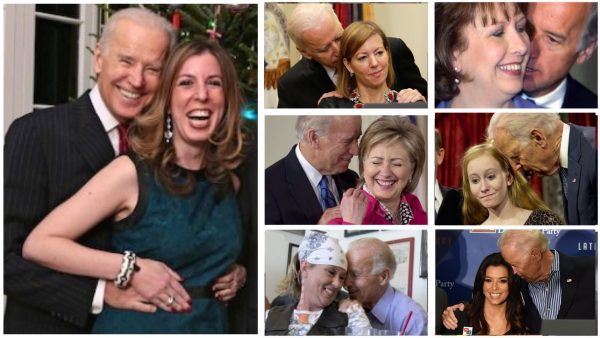 There are a few Democratic party candidates who are standing against the empire and at least paying lip service to issues that Americans actually care about, but these candidates are being ignored or attacked by the mainstream media.

As the news was spreading about Biden’s creepy remarks toward a 10 year old girl, endorsements continued to pour in for the former vice president. Rep. Al Lawson of Florida, a key battleground state, recently put his support behind Biden in the race.

“They don’t make ‘em like Joe anymore. We have an opportunity now to meet head on the greatest challenges of our time, and ensure our best days still lie ahead of us and that is why I am endorsing him to be the next president of the United States,” Lawson said in a statement obtained by POLITICO.

Lawson said that Biden has a “proven track record of bringing people together and delivering results” on issues ranging from health care and the environment to civil rights and women’s rights.

“America is at a crossroads, and it is vital that we elect a leader who will restore the soul of this country, put us back on a path of prosperity and make certain we are respected on the world stage. I have no doubt that Vice President Biden is that leader,” Lawson said.

However, not everyone is impressed.

“Not only is Joe Biden’s creepiness around young girls not something to be dismissed lightly, his refusal to fully apologize and change his ways is indicative of how little he cares about sexual assault. We deserve a meaningful improvement over Donald Trump: Joe ain’t it,” Gravel said.

Biden’s wife Jill has claimed her husband has learned from listening to women, saying that, “Joe heard that message, he heard it loud and clear.”

“Joe heard that and it just won’t happen again. He heard what they were saying,” she said.

However, Jill has not addressed this most recent incident publicly.

Thus far, Biden has only given half hearted apologies to the women he made feel uncomfortable.

“I’m really sorry if what I did in talking to them, in trying to console, if, in fact, they took it in a different way. It’s my responsibility to make sure that I bend over backwards to understand how not to do that. So I invaded your space and I’m sorry this happened. But I’m not sorry in the sense I think I did anything that was intentionally wrong or did anything inappropriate,” he said in an interview last month.

By: Mike Whitney via unz.com Donald Trump wants to fundamentally change U.S. foreign policy. The President wants to abandon the destabilizing wars and regime change operations that have characterized US policy in the past and work collaboratively with countries like Russia that have a mutual interest in fighting terrorism and establishing regional security. Here’s an…