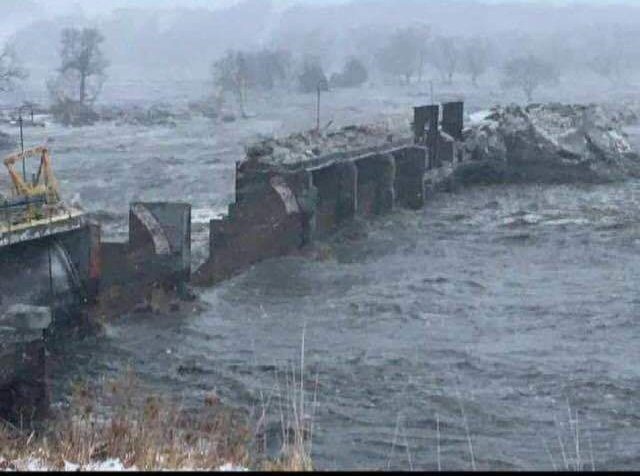 Unprecedented flooding across the midwest could cause further destruction in Kansas, now that the Ericson Dam and nuclear plant is in grave danger.

Ericson Dam can barely contain the rising flood waters as river Cedar continues to overflow. Officials said that the dam is in danger of ‘imminent failure’ and have advised anyone affected to move to higher ground.

Other nuclear power centers along the Missouri River, such as The Cooper Nuclear station, are taking major precautions to prevent similar breaches. It was reported that workers at the power plant have set sandbags around the perimeter of the building.

On Thursday, the region reportedly lost another small electrical plant when the Spencer Dam failed at the Niobrara River and caused a large ice floe to jam a hole in the building.

Mark Becker, spokesman for the Nebraska Public Power District said that if the river levels reached a critical apex of 45.5 feet, which is what is predicted to happen, then the Nuclear Power station will have to be shut down. If this happens, this will result in a shutdown of over 35% of the power to the state of Nebraska

The Knox County Sheriff’s Office posted a notice on Facebook Thursday morning warning residents, noting that the dam had been “compromised.”

The Nebraska State Patrol tweeted a photo showing where a bridge on Highway 281 over the Niobrara River south of the dam had washed away. The phot can be seen below

So far, 19 locations across the Midwest have set new flood crests, according to weather.com senior meteorologist Jon Erdman. There has been at least one death reported in the flooding, but it is not related to the dam or the power plant. According to multiple reports, a local farmer was left stranded and ultimately died as he was trying to rescue someone else from the flooding. The farmer, who has yet to be identified, was killed after the tractor he was using to help free a trapped car was washed away with the floodwaters.

A third of the 24,000 residents in Norfolk, Nebraska, were ordered to evacuate Thursday after the city’s levee system “neared it’s top,” city officials said. The situation has been made worse by the remnants of winter weather, with snow and ice causing trouble on the roads for people who are attempting to evacuate. Ice is also making these floods much more destructive, because the ice blocks are acting as massive projectiles that can break through concrete. Experts expect that this is the reason for the flooding of the dam, as the stone and concrete walls were pelted with large blocks of ice until they began to disintegrate.

Officials have admitted that they are in a state of emergency and are not in a position to help people. Norfolk Public Safety Director Shane Weidner said that this flooding is a threat that the area has not faced in decades and that the county does not have the resources to help.

“Our ability to respond to emergencies is limited. This is a real threat for us. If that levee is breached, the water is trapped in town and we’ll see flooding like we haven’t seen since 1965 and there’s nowhere for the water to go,” Weidner said.

Other officials warned that residents in low land areas should rush to higher ground before it is too late.

“Anyone living near the Platte or in the floodplain needs to get out before it’s too late,” Dustin Wilcox, a spokesman for the Nebraska Association of Natural Resources Districts, told the World-Herald.

The floods are sweeping all throughout the midwest, with the worst flooding being seen in Iowa, Missouri, Minnesota, Wisconsin, and Nebraska.

A levee breach in Hornick, Iowa, forced the immediate evacuation of residents nearby on Thursday. The flooding has sparked dozens of road closures and several evacuations in Missouri, Wisconsin, and Minnesota as well.

The worst case scenario in a situation like this is the disaster that we saw just a few years ago in Fukushima, Japan, which the world is still paying for. On the 11th March in 2011, an earthquake triggered a massive meltdown at a Japanese power plant that has sent billions of gallons of toxic radiation into the Pacific ocean.

Roughly six months ago, from the perspective here at the end of 2018, a heart-wrenching video was captured of an intelligent orangutan apparently trying to defend him precious home from demolition, as loggers wanted to claim his home as their own. In the Sungai Putri forest of Boreno, Indonesia, home of the thick canopy of…

This is a classic example of “there is more to it than meets the eye”. Images from the excavation of Easter Island’s renowned giant head statues has revealed that the heads actually have bodies that extend deep underground and the bodies are in fact marked with detailed tattoos. The Easter Island Statue Project has been…