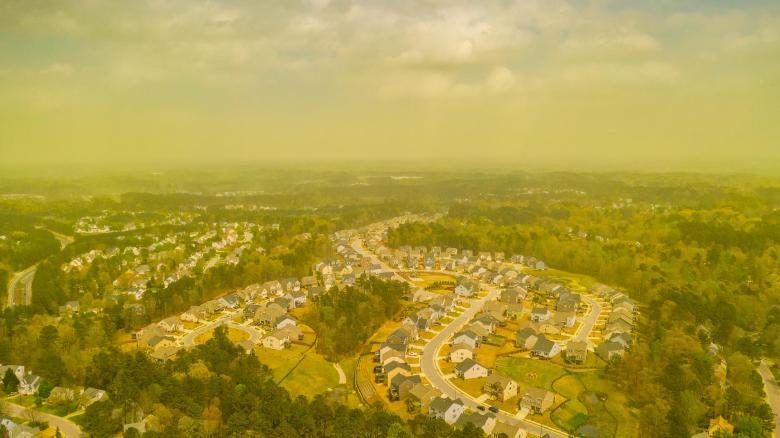 The south-eastern United States is in the middle of what many are calling a “Pollenpocalypse,” with pollen counts being at historic levels across the region. The pollen has been so thick in some areas that it is even visible in photos of the sky and small bodies of water like lakes and creeks. People with severe allergies are being warned to avoid the outdoors if possible, especially in hotspot areas.

In Raleigh, North Carolina, for example, the official pollen count was 1778.8 grains per cubic meter of air yesterday, according to North Carolina’s Department of Environmental Quality. That count is considered “very high” by experts in the field, but it is not the highest the area has seen. The highest pollen count ever measured by scientists in Raleigh was in 2010, when they recorded a count of 3,524 grains per cubic meter, nearly double the count that was recorded this week.

According to the latest Weather Channel numbers released on Tuesday, Raleigh, North Carolina ranks fifth in the country in pollen severity. Tulsa, Oklahoma is at the top of the list, followed by Waco, Texas; Springfield, New Jersey; and Georgetown, Texas.

20 miles away from Raleigh, in Durham, North Carolina photographer Jeremy Gilchrist took some stunning photographs to give a visual representation of the area’s pollen problem. The astonishing photos were shared widely around the internet, with some people finding it hard to believe that the pollen was so thick.

In the photos, a yellow haze can be seen over the whole town, and it is so drastic that it appears some type of color filter was applied the image. You can even see it appearing as a cloud over the town.

“It was surprising to see it up that high,” Gilchrist told CNN.

A video was taken in Hixon, Tennessee showing a tree falling in someone’s front yard, sending a massive visible cloud of pollen into the air. The video was taken by workers from Timberline Outdoors who cut down the tree.

“If you have allergies look away! You might just sneeze from watching this video. Take a look at the pollen cloud this tree created in Hixson, Tennessee,” the company said in their post.

Dr. John R. Sweeney, an allergist in Portsmouth and Suffolk, Virginia, says that allergies are worse than ever.

“It sort of exploded this week. Patients are coming in and they are miserable. The final spring has perhaps finally sprung and we’ve had these false springs all year, they keep coming and going, the weather shifts back and forth, and I think its finally arrived and you can see the pollen everywhere in the air,” Dr. Sweeney said.

This week, In Raleigh, North Carolina yellow pollen was seen floating along the shoreline of Jordan Lake. Footage of the lake was taken just a few days after the massive clouds were seen just 20 miles away from Raleigh.

The North Carolina Department of Environmental Quality reported 2338.5 grains of tree pollen per cubic meter at its laboratory in Raleigh on Thursday.

Tree pollen counts above 1,500 grains per cubic meter are considered “very high,” according to measurement guidelines from the National Allergy Bureau.

According to the Asthma and Allergy Foundation of America, Pollen is one of the most common triggers of seasonal allergies. Many people know pollen allergy as “hay fever.” Experts usually refer to pollen allergy as “seasonal allergic rhinitis.” Each spring, summer and fall, plants release tiny pollen grains to fertilize other plants of the same species. Most of the pollens that cause allergic reactions come from trees, weeds, and grasses. These plants make small, light and dry pollen grains that travel by the wind.

Grasses are the most common cause of allergy. Ragweed is the main cause of weed allergies. Other common sources of weed pollen include sagebrush, pigweed, lamb’s quarters and tumbleweed. Certain species of trees, including birch, cedar, and oak, also produce highly allergenic pollen. Plants fertilized by insects, like roses and some flowering trees, like cherry and pear trees, usually do not cause allergic rhinitis.

Pollen levels are on the rise and some experts suggest that pollen counts of all varieties will double by 2040 in some parts of the country.

Recently, headlines were made centered around a documentary released last August titled “Vitamania: The Sense and Nonsense of Vitamins.” The documentary informed people that a resurgence of scurvy is occurring, an old name for vitamin C deficiency. Essentially, the point being made is that in certain, specific areas of the US and certain other isolated…

By: apnews SEOUL, South Korea (AP) — North Korea on Sunday test-launched a ballistic missile that flew about 700 kilometers (435 miles), South Korea’s military said, a possible response to the election four days ago of a new South Korean president and as U.S., Japanese and European militaries gather for war games in the Pacific….

The photo, which has sparked so much backlash online, depicts a deputy confiscating strawberries and mangos while the man selling them sits on the sidewalk in handcuffs. What’s going on in the photo is clear as day. However, the sheriff’s department took to penning a lengthy post in a futile attempt to explain and justify…