These strange creatures exist, and they look exactly like their name implies, a small scorpion with wings. However, despite its looks, this strange creature does not behave like a scorpion or a fly. These are one of the most creepy and disturbing insects on the planet, but they are pretty much harmless to humans.

The more technical classification for this strange insect is the family Panorpidae within the order Mecoptera. The name of the order is derived from the Greek meco meaning long and pteron meaning wing, referring to the shape of both the front and hind wings in most species. 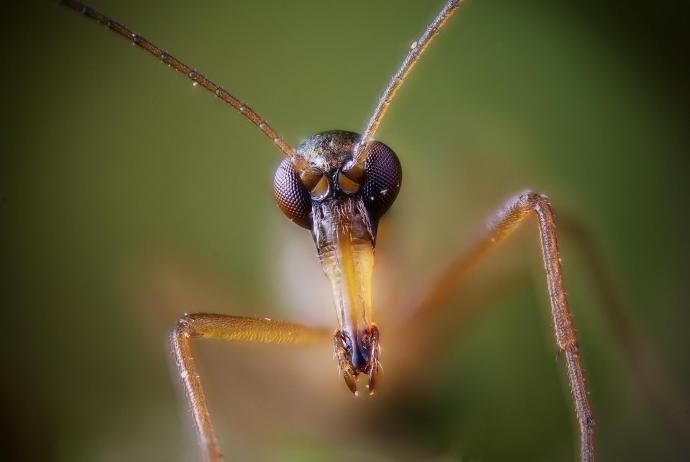 Oddly enough, what appears to be a stinger in these strange flies, is actually the enlarged reproductive organs of the male fly. Luckily, the “stingers” are not actually operational and don’t have the ability to sting or hurt people. It is important to note that the females actually look far less like scorpions than the male specimens, since those stingers are actually just the male reproductive organs, which of course are not present on the females.

There are roughly 550 species of Mecoptera worldwide, and the species dates back to over 250 million years ago. It is also speculated by many researchers that these insects are the ancestors of both butterflies and flies.

While these incents are rare to spot out in the wild, they can actually be found all over the world, but they are more common in rural areas and have a greater species diversity in Africa.

The European scorpionfly was named Panorpa communis by Linnaeus in 1758, then the Mecoptera were named by Alpheus Hyatt and Jennie Maria Arms in 1891.

According to Wikipedia, Mecopterans mostly inhabit moist environments although a few species are found in semi-desert habitats. Scorpionflies, family Panorpidae, generally live in broad-leaf woodlands with plentiful damp leaf litter. Snow scorpionflies, family Boreidae, appear in winter and are to be seen on snowfields and on moss; the larvae being able to jump like fleas. Hangingflies, family Bittacidae, occur in forests, grassland and caves with high moisture levels. They mostly breed among mosses, in leaf litter and other moist places, but their reproductive habits have been little studied, and at least one species, Nannochorista philpotti, has aquatic larvae.

The video below shows the male Scorpion Fly in action.

One of the most creepy things about Scorpion Flies is that although they are no real danger to humans, they do have a habit of feeding on human cadavers. Forensic investigators actually look for Scorpion Flies and examine them to determine how long a body has cold. Scorpion Flies have a taste for living humans too, but just their sweat. Scorpion Flies have been known to be attracted to human sweat, probably because sweat contains sugar, and so does fruit.

Adult mecopterans are mostly scavengers, feeding on decaying vegetation and the soft bodies of dead invertebrates, while some species hunt spiders by raiding their webs, which allows them to steal and collect the spider’s prey, as well as the spider itself. Some groups consume pollen, nectar, midge larvae, carrion and moss fragments.

According to research conducted at the University of Kentucky:

Hangingflies are predators that feed on caterpillars, mosquitoes, flies, moths, and other flying insects. As their name suggests, hangingflies hang and wait in ambush for prey. They use their long, clawed legs to capture insects that get too close. Hangingflies hunt in grassy areas, meadows, and along sheltered cliff-lines. Larval hangingflies are believed to be predators.

As abundant as these creatures are, they are still extremely elusive, and researchers have a difficult time finding them. Scientists believe that they are excellent at hiding from humans and do a far better job of staying off the radar than other animals and insects.

By: Josh David via iflscience.com While attempting to control the local population of Zika-carrying mosquitos, there has been some major collateral damage. After using planes to spray tracts of land in South Carolina with insecticide, locals have found millions of dead honey bees littering the landscape, wiping out businesses and destroying entire colonies in one fell…

According to a study conducted by researchers at the University of Edinburgh, the cells in a human body function much like a circuit board or computer chip, albeit, much more complex. The study was published in Nature Communications, and funded by the British Heart Foundation. Similar to microchips and circuit boards, human cells transmit information…