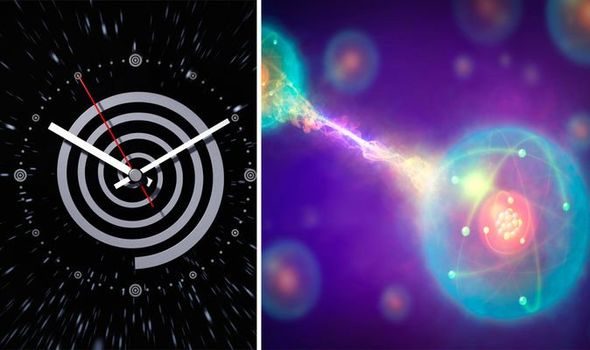 Researchers from the Moscow Institute of Physics Technology (MIPT) claim to have discovered how to reverse time with quantum computers to “re-order” electrons. The scientists compared their process to a broken rack of pool balls reversing back into order. It is unclear how this technology could play out in reality, and if it could potentially lead towards some type of time travel technology.

Lead researcher Dr. Gordey Lesovik, who heads the Laboratory of the Physics of Quantum Information at the MIPT called their achievement an “arrow of time.”

“We have artificially created a state that evolves in a direction opposite to that of the thermodynamic arrow of time. Our algorithm could be updated and used to test programs written for quantum computers and eliminate noise and errors,” Dr. Lesovik said.

According to the abstract of the study, “Uncovering the origin of the “arrow of time” remains a fundamental scientific challenge. Within the framework of statistical physics, this problem was inextricably associated with the Second Law of Thermodynamics, which declares that entropy growth proceeds from the system’s entanglement with the environment.

This poses a question of whether it is possible to develop protocols for circumventing the irreversibility of time and if so to practically implement these protocols. Here we show that, while in nature the complex conjugation needed for time reversal may appear exponentially improbable, one can design a quantum algorithm that includes complex conjugation and thus reverses a given quantum state. Using this algorithm on an IBM quantum computer enables us to experimentally demonstrate a backward time dynamics for an electron scattered on a two-level impurity.”

The study includes some very complex math but seems to show how particles can be reversed in time.

For years it was unclear whether or not quantum computers would ever be a reality, or if they were just always going to remain a theoretical technology, however, numerous companies have made significant progress on prototypes in recent years.

“There are high hopes that quantum computing’s tremendous processing power will someday unleash exponential advances in artificial intelligence. AI systems thrive when the machine learning algorithms used to train them are given massive amounts of data to ingest, classify and analyze. The more precisely that data can be classified according to specific characteristics, or features, the better the AI will perform. Quantum computers are expected to play a crucial role in machine learning, including the crucial aspect of accessing more computationally complex feature spaces – the fine-grain aspects of data that could lead to new insights,” a report on IBM’s AI blog recently said.

In a Nature research paper entitled “Supervised learning with quantum enhanced feature spaces,” the company describes developing and testing a quantum algorithm with the potential to enable machine learning on quantum computers in the near future.

Machine learning and quantum computing are two technologies that each have the potential to alter how computation is performed to address previously untenable problems. Kernel methods for machine learning are ubiquitous in pattern recognition, with support vector machines (SVMs) being the best known method for classification problems. However, there are limitations to the successful solution to such classification problems when the feature space becomes large, and the kernel functions become computationally expensive to estimate. A core element in the computational speed-ups enabled by quantum algorithms is the exploitation of an exponentially large quantum state space through controllable entanglement and interference.

Here we propose and experimentally implement two quantum algorithms on a superconducting processor. A key component in both methods is the use of the quantum state space as feature space. The use of a quantum-enhanced feature space that is only efficiently accessible on a quantum computer provides a possible path to quantum advantage. The algorithms solve a problem of supervised learning: the construction of a classifier. One method, the quantum variational classifier, uses a variational quantum circuit 1,2 to classify the data in a way similar to the method of conventional SVMs. The other method, a quantum kernel estimator, estimates the kernel function on the quantum computer and optimizes a classical SVM. The two methods provide tools for exploring the applications of noisy intermediate-scale quantum computers 3 to machine learning.

Recently, one of the all-time most hilarious photos ever taken was snapped at the Maasai Mara National Reserve in the African country of Kenya. A lion was photographed mating with a lioness, and the face he made while performing the age-old act of reproduction is priceless: beyond explanation. Have you ever made a face like…

If you signed onto social media this week, you may have noticed that all of your friends have been posting photos of what they will look like when they are older. Of course, these pictures aren’t real, they are the work of another new app that uses a unique photo filter, which is similar to…