A DVD containing satanic imagery allegedly arrived at a Sweden-based tech blog, and the cryptic warnings hidden within are driving the Internet mad.

The site claims the DVD included a two-minute video of a human figure dressed in a plague-era doctor’s outfit, complete with the iconic bird-like black mask and black shroud.

The video is grainy and jumpy, but the figure’s motions appear to have some significance, as the person raises their hands several times and reveals a blinking light embedded in the palm of their right hand.

That screeching audio that accompanies the video is more than just white noise. The soundtrack was revealed to contain images hidden using a spectrogram. The images include text phrases such as “You are already dead,” as well as distorted images that appear to show a person, possibly a woman, being tortured or tied up: 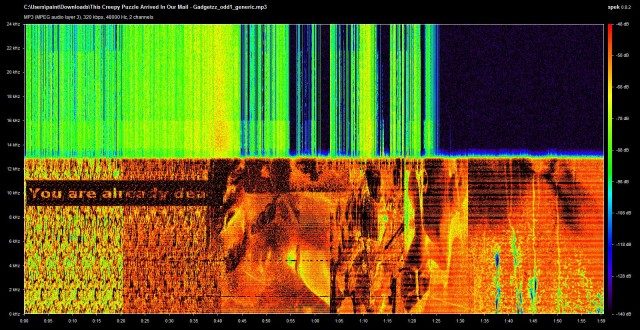 There are several hidden messages within the video clip as well, including one-frame flashes of a Morse code string and coded coordinates. Reddit users have been hard at work decoding these clues and have discovered that the Morse code translates to the phrase “RED LIPSLIKE TENTH.” The coordinate puzzle results in “38.897709, -77.036543,” which happens to be the location of the White House.

Warning: Turn your volume down.

In light of Sy Hersh’s claim that the raid on Osama bin Laden in 2011 is “one big lie,” here’s an overview of evidence in support of an alternative narrative: bin Laden died in December 2001 in Tora Bora from a lung complication as a result of kidney failure starting at least since mid-2000. All…

By: Taylor Rogers via yahoo.com In the six days before President Trump announced his decision to withdraw from the Paris Agreement on climate change, an enormous crack in an Antarctic ice shelf grew 11 miles, according to a report by British Antarctic research group Project MIDAS. The crack, which is located in Larson Shelf C,…