By: EV via anonhq.com

Ever wonder what would happen if the U.S. was nuked? While there are numerous factors to take into consideration in the event of a nuclear war on U.S. soil, we’ve done our best to answer some of the most commonly asked questions, in the simplest and most understandable of terms.

Which Areas Would be Hit, and How Far Would the Fallout Reach?

On the topic of which regions of the U.S. would be hit; part of it is left up to guess work, as we are unable to fully predict the aggressing nation’s tactics, but then much of it is also based on logic. For example, any nation that strikes the U.S. will want to disable their nukes, so we can easily surmise that areas such as North Dakota would be obliterated.

Active nuclear energy plants would also make good targets, as the added nuclear energy from the reactors would maximize destruction. And then of course, there are the major government facilities that would be targeted, at least, those that are known of – unfortunately, it’s safe to assume an aggressing nation’s intelligence would have a better idea of the U.S. government’s “soft spots” than the average American citizen.

Before we get too far ahead of ourselves, however, let’s go with what we know; what kind of targets would the U.S. go for? In the case of Hiroshima and Nagasaki, numerous military personnel, politicians, and now historians claim that the first bomb was dropped to prove it could be done, and the second bomb was dropped to display the United States’ strength to Joseph Stalin in the Soviet Union, who was originally aligned with the U.S. and Britain during WWII, but who the U.S. knew would become a problem once the war was over, (Foner, 2014, p. 887-949).

While we are aware there are numerous citizens who, to this day, refuse to believe any other version of events than the original government narrative, the point is, we can’t use the cases of Hiroshima and Nagasaki as an accurate indicator of the type of targets the U.S. would choose. Fortunately though, we do have a detailed list of targets the U.S. created in 1956 – in the event of war with the Soviet Union – that was released through the National Archives and Records Administration. The list includes major cities for “systematic destruction,” including areas that contain “Agricultural Equipment” and “Transformers, Heavy.” Most horridly though, was a target simply titled “Population.”

Yep. The almighty, all wise, glorious, wholesome and righteous, baseball-loving, apple pie-eating, land of the free, and home of the brave, planned to target large populations of innocent civilians, and it’s with that in mind we can surmise that largely populated areas would be potential targets here in the States, as well.

Provided below are two maps created by FEMA, the first of which is from 1990, and shows the presumed targets the Soviets would have hit in the event of a nuclear attack. “Fallout,” according to the University of Notre Dame, is described as the mixture of earth and/or water that has entered the rising fireball caused from the detonation of a nuclear bomb near the Earth’s surface. This mixes with the radioactive debris of the explosion at an early stage, and is then blown into the troposphere and lower stratosphere, creating fallout. The most lethal fallout is indicated by the darkest coloration, while the lesser lethal fallout is indicated with yellow: 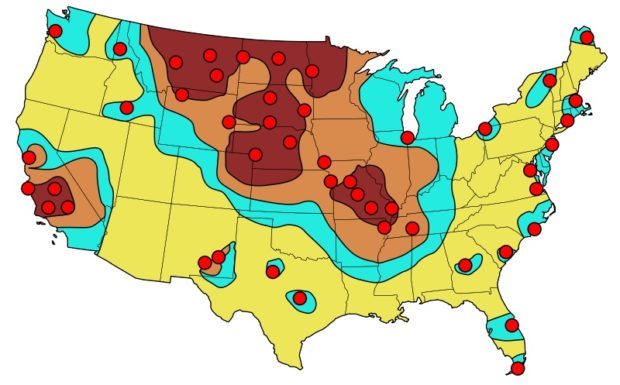 In this map, FEMA shows a sample fallout pattern we could expect in a nuclear attack: 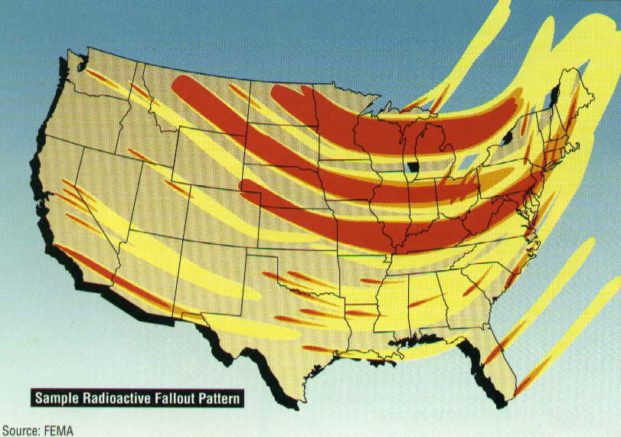 How Long Would the Fallout Last?

After being blown into the troposphere and lower stratosphere, “the material is then re-distributed over polar (3-12 months) or equatorial regions (8-24 months). Fall-out removal times (defined in terms of half-life) ranges from 10 to 24 months depending upon seasonal conditions, most rapid during spring, slow in summer,” again, this is according to the University of Notre Dame, (source above).

Where Would Government Officials and the “Elite” Go in the Event of a Nuclear Attack?

We found through Public Intelligence (a research project that archives government documents and public information), that in cases of national emergencies, the “highest level civilian and military officials,” are sent to Mount Weather in Virginia, which is also the location of FEMA’s National Emergency Coordinating Center. Under the “Continuity of Government,” and the “Continuity of Operations Plan” (COOP), these individuals are kept in one of two underground locations at the facility to basically wait out the catastrophe and take over, should the government be annihilated.

While the Public Intelligence’s source states that the “unknown individuals” serve in rotations, and have since 9/11, other sources say that among those who are evacuated to the location are congressional leaders, as was the case with September 11th. The existence of Mount Weather and the purpose it serves was confirmed by the Federation of American Scientists, an organization first founded under the Manhattan Project to develop the atomic bombs, who states the President, the Cabinet, and Supreme Court are provided private sleeping quarters at the facility. 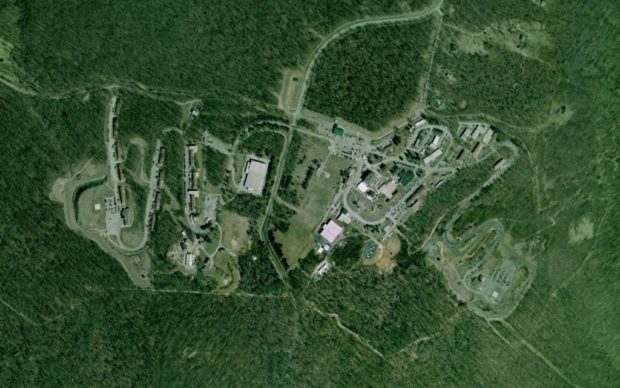 How Likely is the U.S. to get Nuked?

For a while, North Korea was considered the main threat, and in fact, while many mainstream media outlets try to downplay North Korea’s nuclear power with arguments that it’s primitive and their missiles would not be able to reach U.S. mainland, others claim the media is underestimating the threat. Be that as it may, the main focus today with the U.S. elections going on, is Russia.

The mainstream media is saturated with scare-mongering reports, such as ABC’s recent bile titled “Russian Television Warns of Nuclear War Amid US Tensions.” However, if you want to hear it straight-from-the-horse’s-mouth, so to speak, then look no further — provided below is an interview Putin participated in this month, in which he makes it clear that the so-called tensions between the U.S. and Russia are actually meant as a distraction for Americans:

In short, Putin explains that the U.S. has quite a few problems, such as its massive debt and failing economy, as well as relations with Middle-Eastern allies that are becoming strained. But rather than presidential candidates trying to explain to the American people why it is these problems haven’t been solved, the establishment creates new problems to distract from the real issues, and this is where Russia comes in.

According to Putin, Russia’s been a target in this way before, and while U.S. officials spread anti-Russian fear-mongering in the States, they whisper in Putin’s ear, “Just wait this out, it will pass!” Putin states:

“It is my hope that after these debates are over, after this challenging period in internal US politics, there will be an opportunity to restore Russian-American relations.” He later continues, “I’d like to calm everyone down – our American partners and friends. We have no intention of influencing the turn of events in the election of the US.”

While it’s unfortunate our readers have to decide whether to believe Vladimir Putin, or the U.S. mainstream media – which is known as a corrupt, government mandated propaganda machine – just keep in mind that you’re not going to get a better Russian source on the topic than Vladimir Putin himself. Could he be lying? Sure. Do we know for a fact the U.S. mainstream media lies on a daily basis? Definitely. So unfortunately, you’re going to have to pick your poison, but we say chances of a nuclear attack by Russia are most likely minimal.

On that note, we’d like to finish this report up on a somewhat bittersweet note with this rather fascinating video titled, “What Would Happen If Humans Disappeared?”

Without a doubt, China has one of the most brutal censorship regimes on the planet, and by far has the most controlled internet in the developed world. A few months ago, footage surfaced showing a woman being forcefully arrested at her home, reportedly for the crime of speaking her mind on the internet. The specifics…

43-year-old Jason Vukovich was sentenced to 23 years in prison, in February of 2018, for numerous assault and robbery charges. However, many people believe that Vukovich is actually a vigilante hero because all of his victims were pedophiles. At one time, Vukovich called himself an “avenging angel seeking justice,” but has since shown regret for…