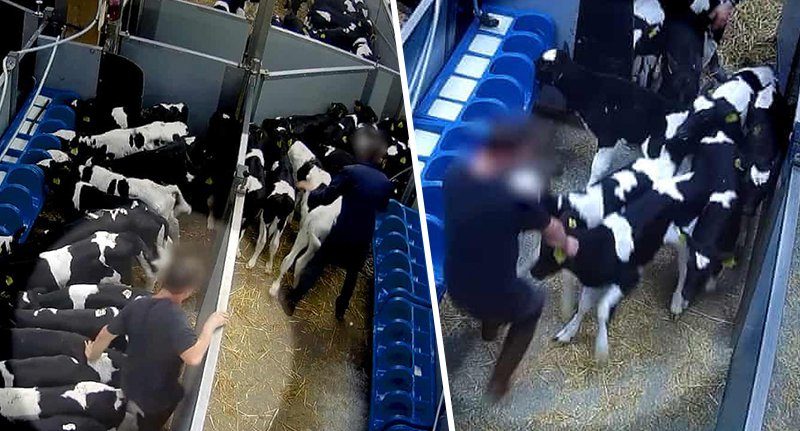 Animal rights activists have recently released disturbing footage showing the live export of young calves, who were transported across Europe to be turned into veal in the Netherlands. The savage footage shows calves from Ireland, some as young as two weeks old, being beaten, kicked and punched.

The activists followed over 5,000 calves on 23 livestock trucks from Ireland to the French control post at Tollevast, where they saw some of the worst abuses. EU animal rights laws require livestock exporters to stop there to rest and feed. However, the footage shows that this is far from a friendly pit stop for the poor animals.

The video shows the young animals being dragged by their ears and beaten with batons. Some of the animals were beaten so badly that they collapsed in pain, unable to walk or stand up. In one clip, taken in March, at the control post operated by Qualivia, one worker can be seen throwing a calf to the floor and repeatedly jumping up and down on it.

Nicola Glen, a spokeswoman for Eyes on Animals, which co-authored the investigation described the situation as “heartbreaking”

“‘It is heartbreaking to see how these vulnerable animals, still unstable on their legs and dependent on their mothers milk, undergo horrific violence during transport to the Dutch veal facilities,” Glen said.

“The Netherlands is the driving force behind this transport and Ireland is the main supplier. Both countries should be taking responsibility for the welfare of these calves,” Glen added.

Some of the workers in the video, who have been identified, can be seen slamming the calves’ faces into plastic feed teats and smashing their heads and necks with batons. French police are currently investigating the videos, and have already made one arrest in the case. One of the men who was identified is the person who was stomping on the cow, and he could face up to two years in prison for his crimes.

Warning, the footage below may be shocking for sensitive viewers:

Isis La Bruyère, an inspector for L214, a French campaign group which co-authored the report, praised the police for their efforts, saying that “The response by the authorities was fast in this case. That is good, but we haven’t seen any movement on the exports business itself so far.”

Qualivia is a very trusted outpost, and is considered a “high quality control post” in the region. The supply post has even received funds from the European Union government to expand its operating facilities.

“Our demand is to ban the long [haul] transport of unweaned animals because in this transportation, there cannot be animal welfare,” Bruyère said.

According to the Guardian, Ireland’s exports to the European Union are increasing at an annual rate of 30% and it is now one of Europe’s biggest vendors of unweaned calves.

Male calves are often seen as disposable by dairy farmers because they cannot produce milk. It is said that some 160,000 calves were exported from Ireland to the European Union last year. In addition, it is estimated that 85,000 adult cows are also transported to the region for their meet. 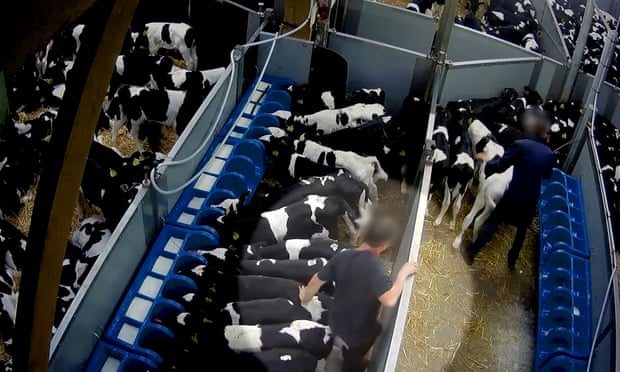 Undercover footage appears to show a worker jumping up and down on a calf. Photo Credit: L214/Eyes on Animals

Lesley Moffat, the director of Eyes on Animals says that the animals are treated like a product or a commodity, not as a living creature.

“Unfortunately, this sort of mistreatment is really common. The calves are treated very roughly at livestock markets because they’re so wobbly on their feet and don’t understand what’s wanted of them. It takes time to get them from A to B and allow them to drink and often the workers end up being forceful and impatient. Many calves are dragged around because they can’t stand up and walk properly,” Moffat said.

“To put a final end to this vicious circle of the dairy industry producing so many calves that they do not want, we have to re-think the whole dairy industry. Either we stop consuming dairy, or the dairy industry incorporates the production of calf meat on the dairy farm by keeping all calves in the herd, with their mothers, and raising them together,” she added.

It is estimated that roughly 1.5 billion animals are transported through Europe every year, and while there are laws on the books to protect these animals, they are rarely and selectively enforced, and don’t carry steep enough penalties, according to most activists.

By: Jake Anderson Via theantimedia.org Private genetic databases like 23andMe and Ancestry.com are increasingly used by people for genealogy tracing and medical diagnostic tests. With a million customers each, the two companies receive a great deal of attention from privacy advocates, who for years warned the government would eventually seek access to citizens’ DNA in order…