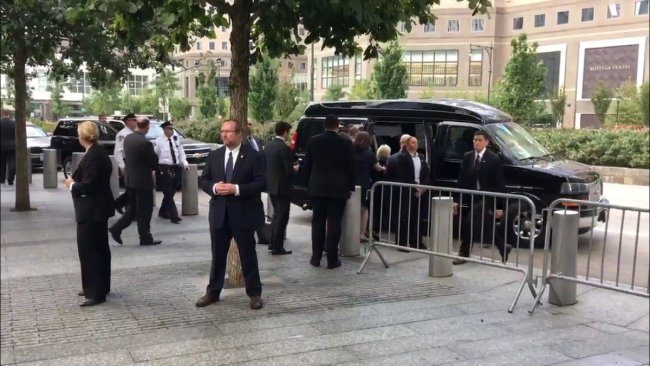 (FN) – Hillary Clinton had a “medical episode” that required her to leave a 9/11 commemoration ceremony early on Sunday.

The Democratic presidential nominee appeared to faint on her way into her van and had to be helped by her security, the source said. She was “clearly having some type of medical episode.”

After more than an hour of radio silence, Clinton’s campaign issued a statement saying the former Secretary of State “felt overheated.”

“Secretary Clinton attended the September 11th Commemoration Ceremony for an hour and thirty minutes this morning to pay her respects and greet some of the families of the fallen,” Clinton spokesman Nick Merrill said. “During the ceremony, she felt overheated so departed to go to her daughter’s apartment, and is feeling much better.”

A senior aide told, “she is fine.”

In what is sure to raise some eyebrows, two emails found in Wikileaks’ latest email leak of John Podesta, allegedly shows that former NASA astronaut Edgar Mitchell emailed Mr. Podesta with intent to set up a meeting where the two would discuss formal Extraterrestrial Disclosure and Zero Point Energy, or more commonly known as “free…