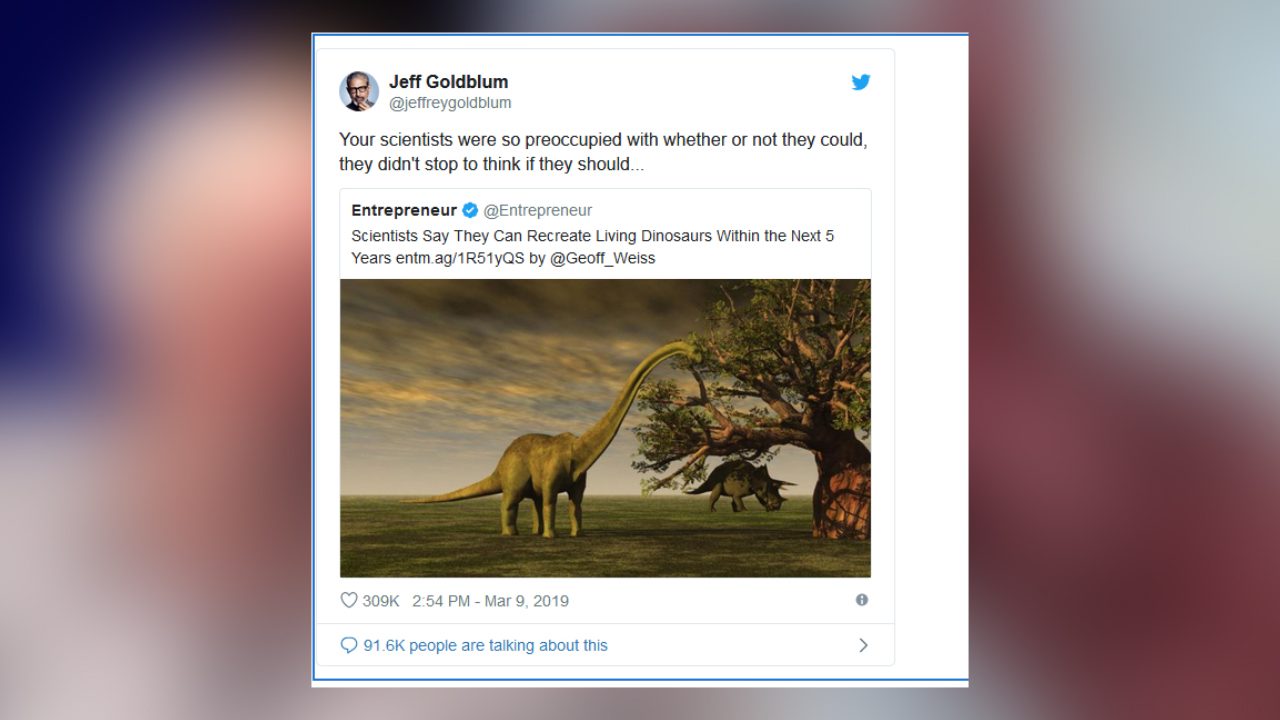 Many experts predict that we are just a few years away from being able to recreate dinosaur species in a lab. Similar experiments are already being conducted, it is just a matter of scaling up the processes and technology at this point.

Researchers at Harvard and Yale have been working to inject the genes of a woolly mammoth into elephants in order to recreate a living breathing wooly mammoth, which has been extinct for centuries. The scientists used CRISPR technology to recreate the genes of the extinct animal.

George Church, one of the researchers on the team, told the Sunday Times that they can now successfully complete the procedure and transfer the DNA>

“We prioritized genes associated with cold resistance including hairiness, ear size, subcutaneous fat and, especially, hemoglobin (the protein that carries oxygen around the body). We now have functioning elephant cells with mammoth DNA in them,” he said.

In a 2016 interview, Paleontologist Dr. Jack Horner predicted that scientists would have the ability to genetically engineer living dinosaurs within five years. Horner was actually the real-life inspiration for the Jurassic Park series who advised Stephen Spielberg during the filming of the movies.

Horner said that dinosaurs could be created by genetically engineering animals that are alive on earth today, meaning that actual dinosaur DNA would not be required for the project.

“Of course, birds are dinosaurs, so we just need to fix them, so they look a little more like a dinosaur. Dinosaurs had long tails, arms, and hands – and through evolution, they’ve lost their tails, and their arms and hands have turned into wings. Additionally, their whole snout has changed from the velociraptor-look to the bird-like beak morphology,” Horner said in an interview with People.

Horner explained how genetic engineering could be used to create a dinosaur.

“Basically, what we do is we go into an embryo that’s just beginning to form, and use some genetic markers to sort of identify when certain genes turn on and when they turn off, and by determining when certain genes turn on, we can sort of figure out how a tail begins to develop. And we want to fix that gene, so it doesn’t stop the tail from growing. We can make a bird with teeth, and we can change its mouth. And actually, the wings and hands are not as difficult. We’re pretty sure we can do that soon,” Horner said.

It is unclear how much progress has been made in the past few years, but if Horner’s predictions are correct, a real-life Jurassic Park could be just around the corner.

This week, Jurassic Park star Jeff Goldblum has responded to the premise of recreating dinosaurs by quoting himself from the movie.

Goldblum’s character from Jurassic Park, Ian Malcolm is skeptical of the scientists who are in his eyes attempting to play God, and it seems like he feels the same way in real life. Goldblum has a good point, both in the movie and in real life.

Recreating dinosaurs is not something that will just be harmful or dangerous for humans, but it will also have a massive impact on the ecosystem and wildlife everywhere. Introducing massive predators to the environment could massively disrupt the food chain in a way that can’t be predicted. Dinosaurs evolved for their own time, and they fit in there, they did not evolve for this time, and they would not fit in here.

Human beings have gained such incredible capabilities with technology, but they have not yet learned when it is actually appropriate to wield the power that comes along with this technology. This is exactly what Goldblum’s character meant when he said, “Your scientists were so preoccupied with whether or not they could, they didn’t stop to think if they should.”

This question can be asked not just for recreating scientists, but with most of the weapons of war of and environmental destruction that are created by the world’s militaries and corporations. This is especially true with genetically modified organisms, food, insect and animal. Until humans learn to responsibly use their technological power, they will continue to make messes for ourselves and the other creatures on the planet.

By: anon66 On March 7th, Wikileaks dropped a gigantic bombshell of revelations in regards to the abilities and unethical approaches of the CIA.  They claim that is only 1% of what they will be leaking … 1. Obama lied: he knew about Hillary’s secret server and wrote to her using a pseudonym, cover-up happened (intent…