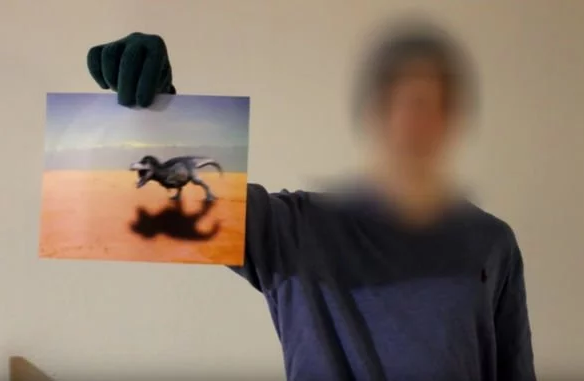 A short clip from the YouTube channel ApexTV has people talking about time travel. However, most of the people who have viewed the clip don’t seem to buy the story.

In the video, an anonymous man hides his identity behind a blurred face, and claims to be from the future. The mysterious man says that he has been on time traveling missions. He claims that on one of his most recent missions, he saw dinosaurs up close and personal.

The alleged time traveler shows a picture of the dinosaur, however, it remains blurred for most of the film. The man claims that the photo was taken during the Cretaceous-Palaeocene era. He said that the photo was proof of a purple Tyrannosaurus Rex that existed 66 million years ago. 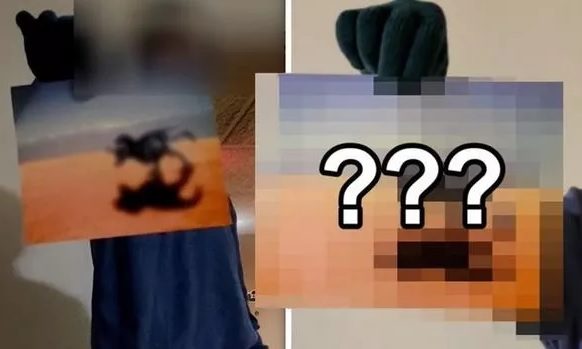 In the video, the man says, “I’m not exactly sure what the exact location was that I took the picture, however, I can say that it was in North America, what would be the modern Southwestern United States. And right now I am actually going to show you the picture that I took 66 million years ago in the past of a T-Rex – a living and breathing T-Rex that I captured on camera.
And I would like to show you this picture right now.”

“You will be actually shocked and my goal is to convince you that time travel is real and I have more evidence, in fact, that I could show in the future as well,” he added.

The alleged time traveler then shows a photo, which appears to be a computer generated image. 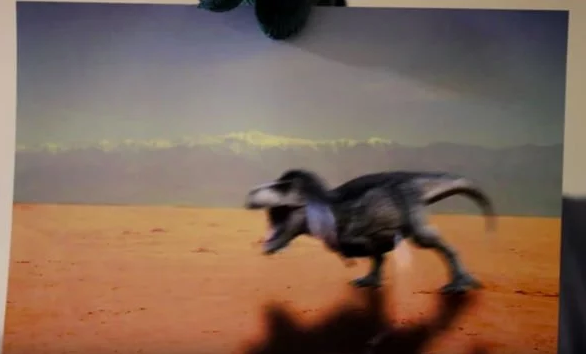 “And you can see it shows an actual living T-Rex that was captured on camera and I took this within the time machine that I was in. And I encourage any photo experts who are out there to look at this picture in depth and you will see that is is not in any way manipulated,” he said.

“This, in fact, is a real picture from 60 million years ago and this is what T-Rexes actually looked like. As you can see the T-Rex does have feathers and like I said, it is a purple color. This because the modern understanding of T-Rexes is incorrect and it took people actually time traveling into the past to actually see what dinners looked like,” he added.

The video has already been seen hundreds of thousands of times, but most of the commenters seem to believe that the photo is fake.

“These videos are getting faker and faker. Saying time travel is real I like saying magic is real. And not a single video I watched about time traveling has explained the technology behind time traveling and how it works,” YouTuber MackTheFifth said.

Another YouTube commenter, Brian Shearburn said that the photo was an obvious fake.

“I can’t believe you or anybody actually believes this nonsense. You honestly can’t tell that picture is fake? Like for real you actually believe that’s an actual picture of a T-Rex?” he said.

“Seriously, CGI from years ago is better than this photo,” Jahleye Davidson added.

Unfortunately, most scientists have long ago ruled out the idea of time travel as a legitimate possibility.

According to Professor William Hiscock of Montana State University, “Time travel into the past, which is what people usually mean by time travel, is a much more uncertain proposition. There are many solutions to Einstein’s equations of General Relativity that allow a person to follow a timeline that would result in her (or him) encountering herself – or her grandmother – at an earlier time. The problem is deciding whether these solutions represent situations that could occur in the real universe, or whether they are mere mathematical oddities incompatible with known physics.”

There are some fringe scientists who do believe that time travel is a possibility.

Gaurav Khanna, a professor of physics at the University of Massachusetts Dartmouth, says that if humans were able to achieve light speed travel, they could potentially travel into the future.

“Can we travel much further into the future? Absolutely.If we could travel close to the speed of light, or in the proximity of a black hole, time would slow enabling us to travel arbitrarily far into the future. The really interesting question is whether we can travel back into the past,” he said.

Although, even Khanna thinks it would be very difficult, if not impossible, to travel backward in time.

It seems like there is a lot of negativity placed everywhere we look, when it comes to fiction, or when it comes to news headlines. Articles circulate about different moments when animals come into dangerous encounters with other creatures, sometimes the stories are interesting or harmless, but other times it gets brutal. Although indescribable feelings…