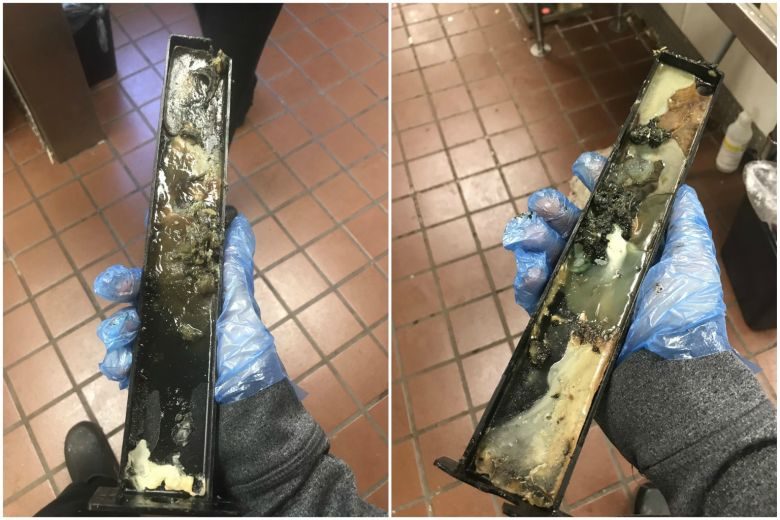 A McDonald’s employee from Laplace, Louisiana was fired after exposing some of the gross things that go on behind the scenes at the restaurant. It all started with a Twitter post shared by Nick, the former employee. The post contained photos showing how dirty the inside of the ice cream machine at his store was. The incident happened in 2017, but is a cautionary tale to anyone who eats at McDonald’s.

The photos showed what appeared to be black hold and sludge, and quickly went viral across the internet.

Nick said that the managers were supposed to clean the machines, but in his whole time of working there, he didn’t see it get cleaned once.

“This came out of McDonald’s ice cream machine in case y’all were wondering…” his caption read.

McDonald’s was quick to remind everyone that this part of the machine does not actually touch the ice cream, however, this type of sight should not be seen anywhere near food.

Other employees began to take pictures of the machines at their locations, showing them in a similar condition.

Nick went on to say that he witnessed other health code violations at the restaurant.

“Sometimes my coworkers would drop the food and put it back on the bun. I’ve seen it happen several times,” Nick said.

He even went a step further and began Tweeting photos of what the food looks like before it is cooked and served.

“Since I’m exposing McDonald’s I might as well show y’all what y’all really eating… fresh out the freezer,” his caption read.

According to a Dateline investigation of the most popular fast food restaurants in the country, “the 100 McDonald’s we looked at came in with a total of 136 critical violations. Some didn’t have a trained and certified food handler on the job, required by law in many states.”

A BBC investigation published in 2017 found that the ice at fast food places like McDonald’s is contaminated with bacteria. While McDonald’s was found to have dirty ice in the investigation, KFC and Burger King were far worse.

A study recently conducted by researchers at London Metropolitan University found that touchscreens used by customers at multiple McDonald’s locations were covered in fecal bacteria. Dr. Paul Matawele, one of the lead researchers in the study, explained that the spread of this bacteria could lead to serious infections.

“We were all surprised how much gut and faecal bacteria there was on the touchscreen machines. These cause the kind of infections that people pick up in hospitals. For instance Enterococcus faecalis is part of the flora of gastrointestinal tracts of healthy humans and other mammals. It is notorious in hospitals for causing hospital acquired infections,” Matawele said.

Researchers tested eight different McDonalds locations throughout the London and Birmingham area, and each location had its own collection of different viruses and bacteria, from listeria at one location to Staphylococcus at another.

Seeing Staphylococcus on these machines is worrying because it is so contagious. It starts around people’s noses, if they touch their nose with their fingers and then transfer it to the touchscreen someone else will get it, and if they have an open cut which it gets into, then it can be dangerous. There is a lot of worries at the moment that staphylococcus is becoming resistant to antibiotics. However, it is still really dangerous in places like Africa where it can cause toxic shock,” Dr. Matawele said.

“Listeria is another rare bacterium we were shocked to find on touchscreen machines as again this can be very contagious and a problem for those with a weak immune system,” Matawele added.

Meanwhile, a vast majority of the samples tested positive for traces of the bacteria Proteus.

Luckily, fast-food seems to be falling out of favor, especially among younger people who are seeking more healthy alternatives.

At the time, the company’s incoming CEO, Steve Easterbrook said that massive changes would be needed to improve McDonald’s struggling reputation.

“I think there is a hunger and an interest in our business to embrace change. McDonald’s management team is keenly focused on acting more quickly to better address today’s consumer needs, expectations, and the competitive marketplace,” Easterbrook said.

In April 2015 the National Institute of Drug Abuse acknowledged that cannabis kills cancer cells and dramatically reduces the growth of new brain cancer cells. This was a startling admission, considering that federal government’s position on cannabis retains it as a Schedule 1 drug with “no medical benefit.” Research has continued despite this roadblock, and…

BBC reports: President Donald Trump will declare a national emergency to fund his planned border wall with Mexico, the White House says. He is to sign a border security bill to avert a government shutdown – but also act to bypass Congress and use military funds for the wall, a statement said. Senior Democrats have…