Recently, a poster on Disclose.tv made a pretty futile attempt at reviving a topic that has been dead since 2013, which was 6 years ago: and that is the topic of “tropical” diseases coming to America. Rather, he copied it from someone else who regurgitated it.

The post is mostly about global warming rather than the diseases that are allegedly coming to America and spreading into Western countries. It’s kind of strange how much emphasis is placed on the fact that certain parasites and diseases are only prevalent in “third world countries” and the UK, the United States, and other countries seem to be luckily out of reach.

However that probably has more to do with the humidity and heat of tropical locations, wealth disparity and the connection to affording sanitary conditions, and possibly even something more nefarious. 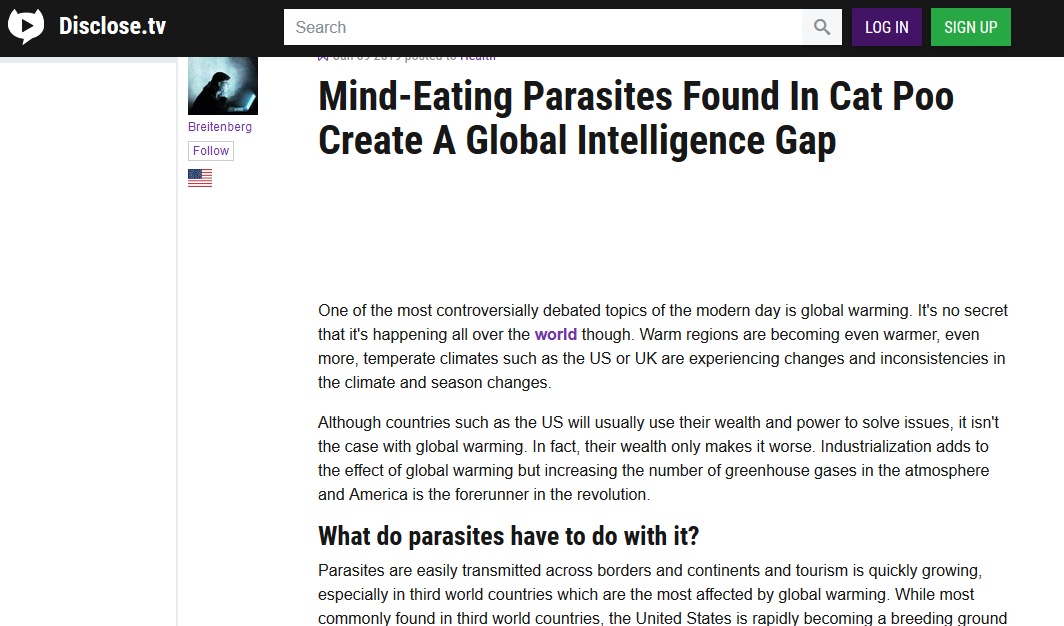 The comments on the post were one of the most entertaining features: 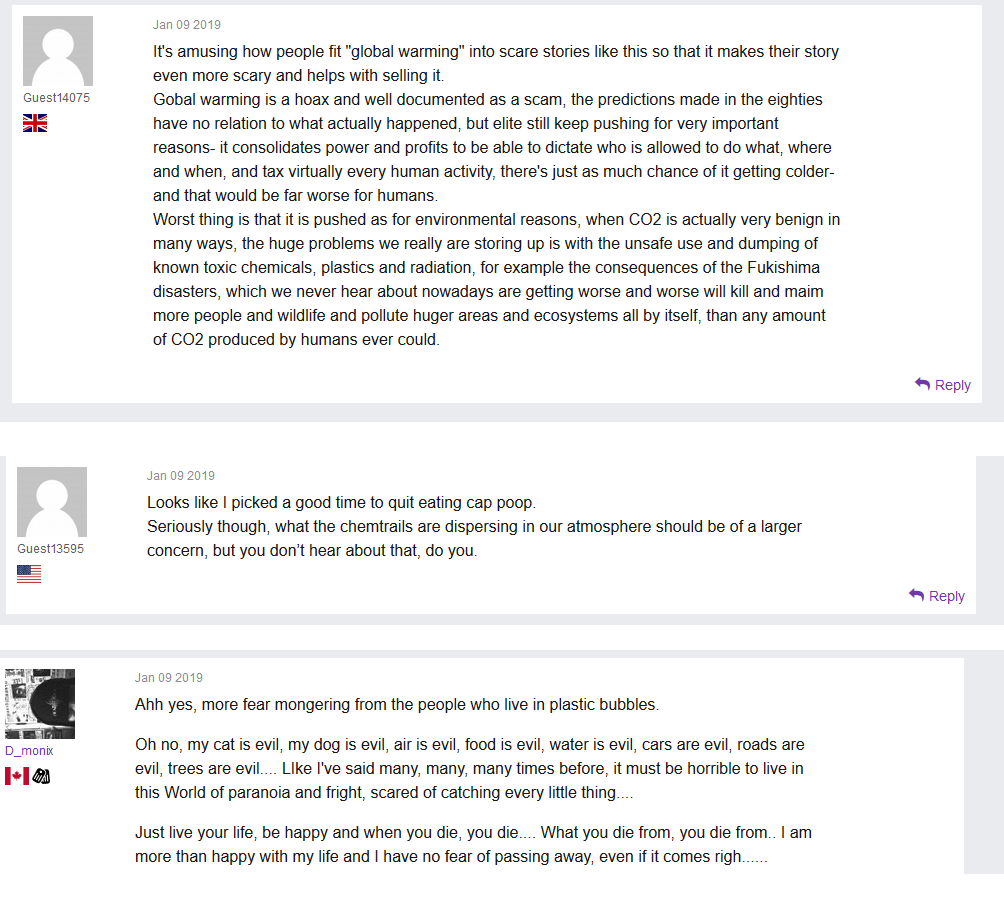 Posts like this are paraphrased information from extremely out-dated articles, dating back to 2013 and 2009, such as this one from Discover Magazine that is introduced by the sentence: “Parasites and viruses once thought to make their homes exclusively in exotic locales beyond America’s borders are now gaining a foothold in the country and they are exacting significant economic tolls and placing heavy burdens on health care systems.”

Wow, that’s a mouthful. The danger of harmful parasites and diseases are certainly not to be underestimated, but the media can’t help but milk any potential threat for every dollar that headline can generate.

At the time of this article’s publication, June 2013, a symposium had been attended by the author in New Orleans, Louisiana to discuss the issue of dangerous tropical diseases that have been noticed in the state, a similarly humid and hot region.

However, we’re in 2019 now and no widespread threat of tropical disease has hit Louisiana or the hot, humid southern states of the US. In retrospect, it makes more sense that this symposium was attended by “University professors, research scientists and public health authorities from the state” who “beyond urgently spoke of the dawning reality” of these diseases: people who sound like they are paid to focus on this issue in particular. The exaggerations here are astounding: why are they trying to generate fear over this?

Make no mistake however, these parasites, viruses, and bacteria are dangerous and they affect, according to scientists, an estimated 1.4 billion people worldwide as of 2013. That’s not to be underestimated, but there is a fine line between warning people to be careful or advising them on how to genuinely avoid the problem, and fearmongering for a certain purpose.

About 10 entire years ago when the main article cited in current, outdated articles about this was published, it was estimated that around 35,000 newborn babies in the US are annually affected by cytomegalovirus, with around 8,000 suffering from birth defects, common in inner cities.

Toxocariasis has allegedly affected around 2.8 million people in the US in “the last 5 years,” but the new articles about this cited an article from 10 years ago. It’s a fever inducing, retina-damaging parasite mostly found in cat and dog feces.

One “tropical disease” called cysticerosis, a tapeworm, has reportedly been found in the “Southern US border regions” and Latin America. It causes blurred vision, and recurrent seizures.

Now about the “global intelligence gap”: believing that people living in the inner cities are dumber because of a cat-sh** parasite is simply ridiculous. To think that an “intelligence gap” could exist between, for instance, people living in “third world countries” and western countries because of a brain eating parasite is insane, and whoever came up with this revived, decade old article is completely full of sh**.

To take it further, a new, regurgitated article about this said: “A lot of people living in such areas have either ditched having pets or have begun taking their pets for regular check-ups, and are carefully watching what the animals consume.” Yeah, people should routinely check their animals for parasites, but that’s ridiculously out of touch and disrespectful to people who love animals. You don’t see swathes of people “ditching” their pets, and didn’t ten years ago.

The existence of these diseases is a nightmare. Realistically however, they are all incredibly uncommon in the US, and it seems like where sanitation improves everywhere, things like this steadily improve. Wealth being hoarded by the greediest people in the world, and thus the lack of money for sanitation in certain areas, is arguably the greatest cause for all of this. Global warming is not the reason why some people can’t afford basic sanitation, real or not.

When you look at this map presented in the Discover Magazine article about this, something begins to make a little more sense. They are singling out “tribal” communities of Native Americans in the Southwestern United States, and a lot of poor communities in the South. However, a greater emphasis is placed on the regions of southern Texas and New Mexico: where the greatest concentration of Mexican American immigrants is present.

Since these articles were published between 2009 and 2013, and now we’re in 2019, it’s safe to say that 6-10 years later this threat was blown out of proportion. People should applaud their ability to remain protected because apparently we’re good at staying safe from disease: sanitation.

However, possibly the healthiest reaction anybody could have to this information is: how is it possible that in some places they callously refer to as “third world countries,” people can suffer from such intense and horrific parasites and diseases? I can’t say the answer to that question is something I know, but hopefully people will feel empathy for those people, because just think about how terrible that would be.

Do a lot of people really suffer from parasites and deadly viruses in certain countries, or is that blown out of proportion? Is the reason why, the greed of people in this world who hoard massive amounts of wealth?

When using modern day gadgets, safety should always be your top priority. With the help of just a few short codes, you can find out more about the settings of your phone and work out whether or not your messages and information are protected and whether you’re being tracked. This article shares the most useful…

Somewhere between our own planet and the core of our galaxy, a well aged, faint and dimming star that is putting off indications of something orbiting it is confusing astronomers. It sounds like another one of those potential “alien structures” situated around a star, remember when it was reported that odd flickering of stars could…