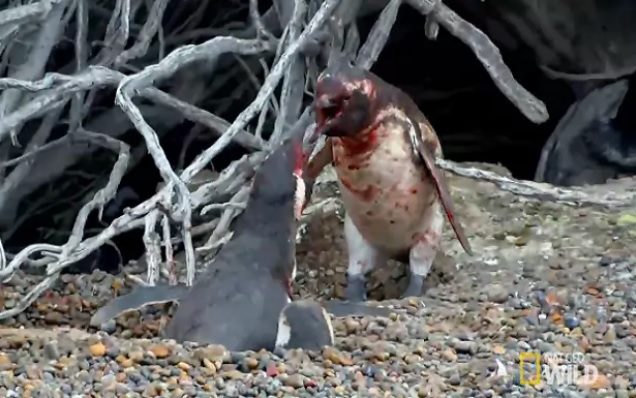 In a very strange video published by The National Geographic Channel, a penguin finds his mate with another male and starts a bloody battle of honor.

“Every September, 200,000 penguins come here to fix up their nests and breed. Life here is good, but this husband has come home to find his ‘wife’ with another penguin,” the narrator explains.

The footage begins with the two unfaithful penguins enjoying each other’s company when another penguin, said to be the female’s original mate, approaches the pair angrily. 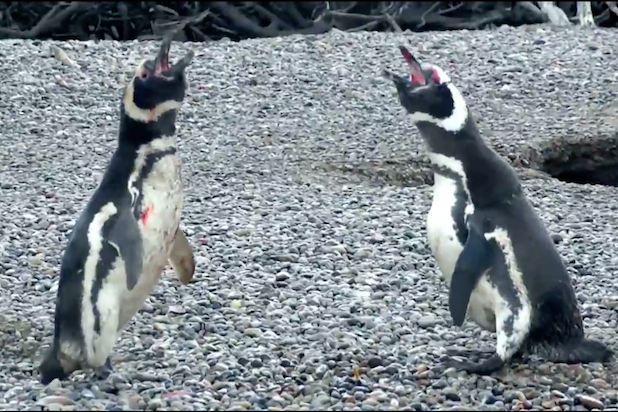 Next, a brutal fight takes place between the two animals, where they each viciously attacked one another with their wings.’

The narrator says that the Penguin “flips out.”

“His strategy is simple, batter the homewrecker until he flees. Most birds have hollow bones in their wings to make them lighter for flight, but penguins don’t fly, their wings contain solid bone. They use them like baseball bats to club each other, delivering up to eight blows per second. Thick blubber helps protect vital organs from the pummelling,” the narrator says.

Sadly, the heroic actions of the penguin did not win back his mate.

“She chooses the homewrecker. The husband stands to lose the mother of his children. He follows them home, this fight isn’t over yet. With the homewrecker hiding in the burrow, the only way to get to him is a beak attack,” the narrator adds.

The husband is relentless and still tries to continue the fight, but the other penguin realizes that he has won, and the female has “no time for losers,” as the narrator says.

The internet could not handle the clip, and had their hearts broken by the scene. Some commenters on twitter said that the narrator made it even worse with his snide remarks about the battle.

She stole Iowa, Nevada and Massachusetts – but Arizona is Hillary Clinton’s election fraud masterpiece. Desperate to prevent another “Michigan upset”, Hillary found an ingenious way to guarantee victory in Arizona. The key to Clinton’s strategy in Arizona was early voting. In Arizona, around 70% of voters cast their ballot by mail. Why is this…

UNITED NATIONS (AP) ” North Korea’s U.N. Mission is calling what it says was a “terrorist” plot by the U.S. and South Korean intelligence agencies to kill leader Kim Jung Un a “declaration of war.” A statement Thursday from the mission said a “Korean-style anti-terrorist offensive will be commenced to mop up the intelligence and…

Headlines are being made right now in the midst of this event that is being talked about ad nauseam, the midterm elections. A major election recount is underway with Broward County, Florida at the center of it, and to fuel the flurry of media coverage, Florida Senator Marco Rubio took to Twitter to share a…