If there was ever a smoking gun to be produced by WikiLeaks, this is it!

Specifically, James Comey originally used the argument that the evidence found against Hillary was lacking an “intent” element, meaning they didn’t find she intended to break the law. Well, WikiLeaks just produced all the “intent” we need.

HERE’S HOW IT BREAKS DOWN…

Zero Hedge has put the pieces together by pointing out the following:

On March 2, 2015 The New York Times reported that Hillary Clinton used a personal email server as Secretary of State.

Later on March 2, 2015 Hillary Clinton’s top aide and attorney wrote John Podesta that “we are going to have to dump all those emails.”

You can clearly see the email from John Podesta below to Cheryl Mills saying,“On another matter….and not to sound like Lanny, but we are going to have to dump all those emails so better to do so sooner than later” 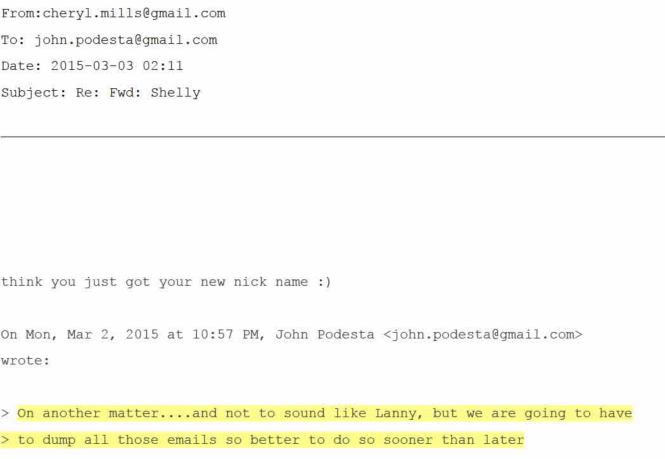 Director Comey, here, I’ve done your job for you. Here is the intent. #podestaemails25 pic.twitter.com/plFEYDaQ3D @slone

So there you have it folks! Comey’s ‘intent’ element has just been produced and things are going to only get worse, because it’s expected that Hillary’s 33,000 deleted emails will be released this week as well.

Zero hedge also points out that, “a search for Lanny Davis reveals the following curious exchange between Robby Mook and John Podesta from March 8, 2015, just days after the abovementioned exchange, in which Mook says:”

“We gotta zap Lanny out of our universe. Can’t believe he committed her to a private review of her hard drive on TV.”

Clearly, the Clinton camp has been hiding and destroying evidence the entire time and they have just incriminated themselves for all of America to see.

This article originally appeared on thewesternmedia.net

A bishop from Colombia has an outrageous plan to exorcise the entire city of Buenaventura by dropping huge quantities of holy water from a helicopter. Monsignor Rubén Darío Jaramillo Montoya is the bishop of Buenaventura, and he believes that the city is in such serious trouble that it must be the work of the devil….