A hacker who took over the social media accounts of various pro-ISIS groups has repeated his outrageous hack.

WachulaGhost, a hacker who is associated with Anonymous, hacked into the Twitter account of the violently homophobic group almost a year after his first break-in.

In 2016 he targetted the group following the murder of 49 men and women in the Pulse nightclub massacre. 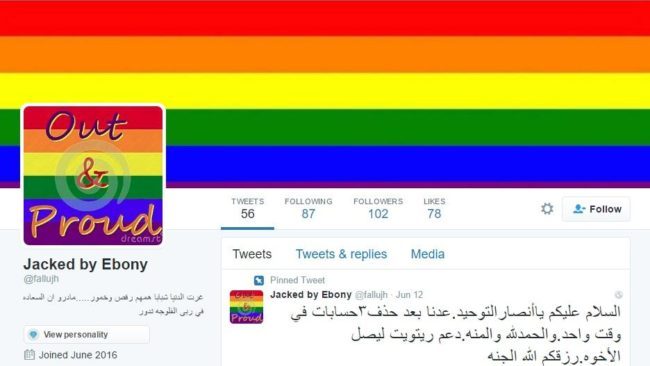 The hacks may seem remarkable, but WachulaGhost insists ISIS social media is surprisingly easy to get into.

Apparently ISIS is embracing gay culture because they’ve run out of women. How sad! Gross! Let’s not be like them! #isisgay #gayisis pic.twitter.com/p6M2XZBuMo

The online arsonist has received death threats and been sent videos of beheadings since last year, but insists the abuse and threats haven’t put him off.

He says he began targeting pro-ISIS accounts because someone needed to “stand up” to the extremist group.

“We thought that putting the naked images would offend them.”

He told CNN after the first hacking: “I get beheading images… death threats. ‘We’re going to kill you’ and that’s good because if they are focusing on me they are not doing anything else.

“Sometimes you have to stand up and make a change for the good.”

Going on, he says that ISIS supporters generally don’t have very strong computer literacy, and that it takes around 60 seconds for him to hack each account.

“Daesh [ISIS] have been spreading and praising the attack, so I thought I would defend those that were lost. The taking of innocent lives will not be tolerated,” he said of the Orlando shooting.

“Our actions are directed at Jihadist extremists. Many of our own [group of hackers] are Muslim and we respect all religions that do not take innocent lives.”

Messages posted to the compromised accounts include “I’m gay and proud” and “Out and proud.”

However, the hacker says his efforts are not aimed at the Muslim population as a whole – only the few “Jihadist extremists” that operate on the site.

“I did it for the lives lost in Orlando. Daesh [ISIS] have been spreading and praising the attack, so I thought I would defend those that were lost,” he told NewsWeek.

“The taking of innocent lives will not be tolerated.”

Xenia Tchoumi is an economics graduate who was offered a job as an investment banker at J.P. Morgan after earning her degree. Tchoumi is a truly brilliant person, having a deep understanding of economics and the ability to speak Italian, Russian, English, German, French, and Spanish. Photo Credit: Instagram/Xenia Tchoumi However, Tchoumi turned down that…